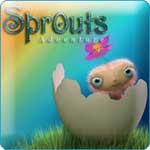 Eating, sleeping, playing, working. These are the key elements to any satisfying existence, and so it is for Sprouts Adventure’s tiny protagonists, little flora/fauna hybrids who look a bit like Nintendo’s popular pikmin characters and spend their days trying stay productive, healthy, and happy.

As simulation games go, this is a pretty simple one. The sprouts are in rough shape. A storm has reduced the number of these cute little creatures with nasally helium voices and flowers growing from their skulls to just five, and these remaining few have…well, nothing, other than a giant egg-shaped idol that they worship.

That’s where we come in. As their deity, our job is to get them back on track to becoming a flourishing society of sentient stalks, and there are some pretty specific ways for us to accomplish this task.

You’ll begin by setting the sprouts to work on buildings, like sleeping quarters and a bridge. Once one of them has dreamt up an idea of the sort of structure they want a building foundation will appear. Then you can start dragging sprouts over to the building area to set them to work with tiny black hammers.

But the sprouts aren’t automatons. Work them constantly and they’ll grow hungry, get bored, and lose their drive. To keep this from happening you need to set them about activities that fill their “life attributes” meters.

Throughout the game various stones and butterflies appear at random in the forest. Drag a sprout over to one to examine it and she’ll get a small boost to either her curiosity or motivation attribute. You can also satisfy these needs by having them do things like play with a mushroom ball, fly a kite, or fish.

When sprouts get hungry you can drag them on top of randomly appearing flower buds, which they’ll quickly munch down for a bit of sustenance, or have them tend their small garden, tilling the earth and sowing seeds to grow plants capable of completely nourishing even starving sprouts in under a minute.

However, for the garden to flourish it requires a couple of spells: Glowing Sun and Mystic Rain. Spells are slowly unlocked as the game progresses, and some have multiple uses. The rain spell, for example, doesn’t just help plants grow. Use it directly on a sprout and it will stave off her need for sleep for several minutes; use it on a well to fill it with water and your sprouts can begin making wishes.

Other early spells include Sprouting Egg, which will create a new life for the community, and “Gift from Above,” a gift box that contains instant motivation and curiosity boosters. There are nearly a dozen spells in total, with the final ones coming available only near the end of the game.

It’s moderately compelling stuff, all things considered. There is a simple satisfaction that comes from efficiently planning out your sprouts’ activities. By the midway point of the game I found had a schedule in place that had sprouts assigned to three separate groups that took turns sleeping, working, and exploring/playing.

The game never becomes overwhelmingly complex. I found I was always able to pick up where I left off with little problem, and even if I became distracted and my sprouts began suffering I was able to get them back on track with about five or ten minutes of dedicated governance. Indeed, this is a game simple enough that you should be able to share it with your grade-school children, creating a bit of added value.

However, Sprouts Adventure does suffer a couple of significant blips that could prove deal-breakers for even the most avid simulation game lovers.
The first is performance. The game often chugged on my pricey, eight-month old entertainment laptop, especially when running in windowed mode with a couple of other application going in the background. Playing in full-screen mode resulted in better performance, but this is one game that players will likely want to keep in a window, given that there will often be times when your sprouts are doing their own thing, leaving multitaskers time to escape for a few seconds to check your email or instant messenger.

The other issue is the camera. We can only move the camera by mousing to the edge of the screen and nudging it in one direction or another (dreadfully slow) or by clicking to grab the ground and drag it around (awkward). Why we can’t simply tap the arrow keys is anyone’s guess.

This cumbersome camera makes exploring the environment for randomly generated objects and then dragging our sprouts to them before they disappear enormously frustrating. Compounding the problem is the fact that we can’t zoom to different viewing levels to fit more real estate on screen. You can view the whole map at once if you like, but you can’t interact with anything on it, which sort of defeats the purpose.

It’s a shame that just a couple of snags can put a damper on an otherwise pleasant fantasy sim, but there’s no denying they do. Best give this one a try before buying to see if you’re willing to put up with the performance and camera hitches.