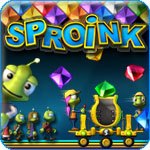 Despite the copycat mentality common to our world, every so often a twitch-happy brainteaser comes along that dares to break the mold.

Enter Sproink, one of the most eccentric and original takes on pattern-matching puzzlers we’ve had the pleasure of sitting down with in many a moon. Although geared toward expert-level players and not without its fair share of quirks and inconsistencies, enthusiasts will quickly warm to the bizarre little outing’s singular charm and humorously adorable audiovisual presentation.

According to the storyline (told through a series of sharp cinematic sequences complete with high-pitched voice-overs), centuries ago, an asteroid rocketing through space lay on a collision course with remote planet Sproinkus. Disaster was inevitable, so great subterranean refuges were built within the remote world’s bowels, and five million Sproinklings secreted away in hopes of eventually riding out the catastrophe. Now, 300 years later, supplies have begun to dwindle, and the creatures – cute, turtle-like humanoids with huge eyes and a single antenna on their head – must again return to the surface. Which, of course, is where you come in: Playing savior, naturally, to the entire extraterrestrial race…

Progressing through the lone game variant, a 100-stage solo campaign set atop a handwritten map featuring locales like the Lake People Colony and Cavern of Storms, one must rescue every last one of the alien critters. How to do so? Simple… Just clear each level of mysterious falling crystals which were brought to earth long-ago by the galaxy-traveling asteroid.

Moving the mouse left and right, you control an urn-equipped mine cart manipulated by male and female, hardhat-wearing Sproinklings located at the bottom of the screen. High above are situated smartly-positioned patterns of multicolored crystals, which slowly shake before tumbling down, one by one. Your goal: To catch each falling crystal – note that urns hold four maximum – and shoot (or “sproink”) it back up, hopefully matching three or more like-hued gems in the process, thereby eliminating them from play. The longer you hold the left mouse button down, the faster and higher crystals shoot, bouncing off angled surfaces or coming to rest in hollow grooves between indestructible obsidian blocks. (Note that it’s also possible to tilt and aim urns for angled shots while doing so, or click the right mouse button to swap ammo.)

Game-affecting twists are many and varied, however. For starters, crystals bounce off any and everything – walls, corners, even the lip of your urn. (Fail to catch them precisely and they can literally go skidding off in any direction.) Angled or linear rainbow-colored bridges also rest below you that not only move upwards periodically, bringing you closer to bumping your head on the scenery, but can be quickly chipped away by tumbling jewels. Robots and destructible airships soar overhead as well, dropping helpful power-ups or impeding shots. Positive and negative bonus items from drills to rocket launchers, control-affecting downgrades, bombs and buzzsaws populate various backgrounds too. And, go figure, special crystals also pop up periodically that split into two distinctly-shaded gems on impact.

Ridiculously frantic, the action’s highly challenging, especially for beginners, as the difficulty ramp-up comes on quick. Alas, given how unpredictably crystals bounce, this caveat’s not a plus for veterans either – you never know quite how ricocheting or even carefully-fired crystals will react. An inability to cancel shots once the mouse button’s been pressed doesn’t help matters any either. While we additionally appreciate animations featuring saved Sproinklings crossing bridges that follow each stage’s conclusion, having to sit through these scenes umpteen times does prove tiresome.

But troubles aside – and you will notice minor niggles like tottering gems that can’t be eliminated via last-minute matches once they’ve started shaking – there’s a lot to love here. New bonuses and power-ups are constantly introduced. Level design is excellent, and the tale’s madcap pacing is often countered by simple solutions you can use to quickly blaze through various scenarios. (For example, options to knock out supporting beams, which cause lower-hanging crystals to fall en masse…) Graphic and sound quality is also superb, with lots of odd chirps and catchy noises offered up by the cute little extraterrestrial stars themselves.

Therefore Sproink’s certainly worth a gander, if only to see what a little ingenuity hath wrought. We’ll hold out hope for a sequel – and keep chipping away at the thrills presently on offer, hoping to make more headway with this clever, wrist-cramping mindbender in the weeks to come.