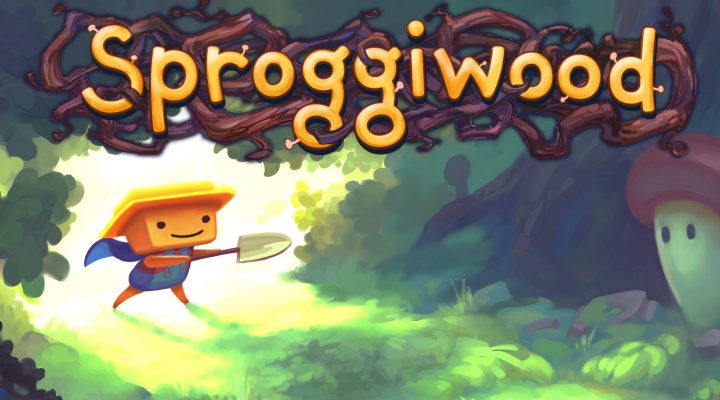 Charming and endearing graphics, characters, and writing from start to finish.

Tons of weapons, armor, and items to discover and mix and match.

Each of the six classes plays differently thanks to unique skills.

Feels perfect on handsets and tablets.

Freehold Games’ Sproggiwood released on PC in October of 2014, shortly after Gamezebo’s focus changed to mobile-only coverage. Luckily for us and mobile players everywhere, this charming roguelike is now available on iOS and Android in all its mushroomy glory. As a full port with all the content and class of its older brother, plus the addition of perfectly implemented touch controls, Sproggiwood mobile may be the definitive way to play.

The world of Sproggiwood is lightly based on Finnish mythology, featuring a land ruled by the god of time, Raako, and his guardian spirits. One such spirit-slash-talking sheep impersonator, Sproggi, is our primary guide and partner through the land of Sprog: a beautiful piece of nature inhabited by dozens of different species. Sproggi fears that his denizens’ scattered and uncivilized ways are leading them towards war and chaos, and so he brings our protagonist—you, Cloghead!—in to teach them order and build a unified society. Simultaneously, however, a brand new species appears in Sprog—the mushrooms—and Cloghead must corral the rapidly-expanding shrooms before they frighten the other species into war, or worse. 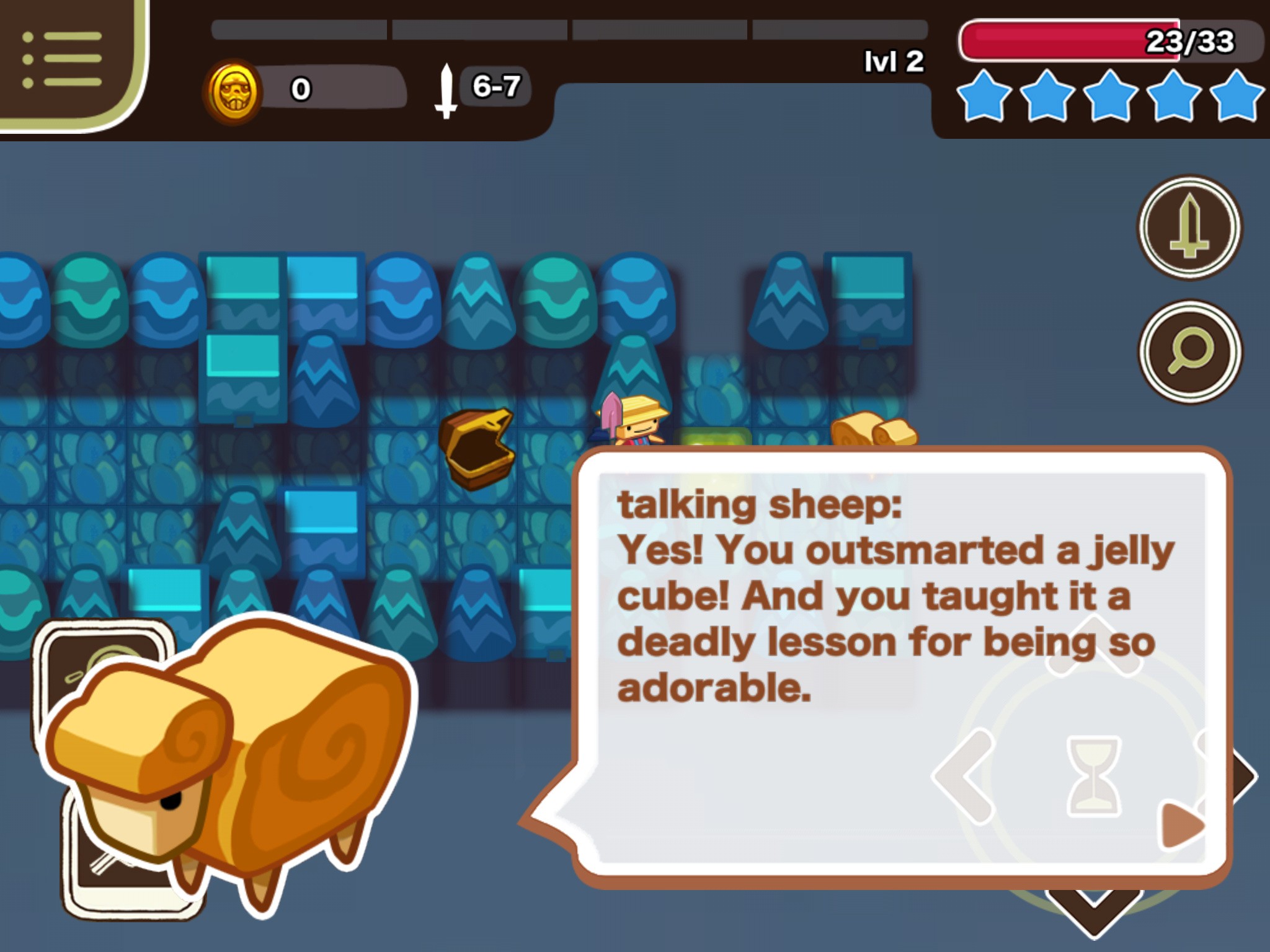 While the story might sound complex on paper, it’s mostly present in dialogue points from Sproggi as you advance across the world map. Sproggiwood is really a roguelike-lite, utilizing a number of features to remain accessible to genre newcomers, and this use of plot progression is one of them. Instead of featuring one giant, endless dungeon crawl as in 100 Rogues or Shattered Planet, Sproggiwood uses a series of finite levels punctuated by boss fights, similar to Cardinal Quest 2.

In order to move on to the next dungeon on the map, you’ll need to reach and beat the boss of the previous one, providing a way to measure progress and a concrete goal beyond a high score. The brevity of each dungeon—usually averaging four or five floors—makes this a great fit for the pick-up-and-play style of mobile.

Another forgiving feature is the ability to permanently buy any equipment or items discovered in a dungeon. While exploring, if you come across a weapon, piece of armor, accessory, or potion, it will be added to your shop inventory. Purchasing that item then unlocks it for use in any dungeon: before entering, you can equip your character with one item per category from your owned selection, allowing him a significant head start over the vanilla Cloghead. Other permanent upgrades, like increased EXP multipliers or more treasure chests per stage, offer additional ways to do well in the game even if your ability itself remains stagnant.

Once in a dungeon, your time will be spent wandering the procedurally generated, fog-of-war-covered stage in search of treasure and the stairs to the next level. Enemies act only when you do, allowing plenty of time to stop and think about your next move before taking it. As you slay hostile creatures, you’ll earn experience points and levels, which lead to higher attack power and special skills that are unique to the various classes available to Cloghead. 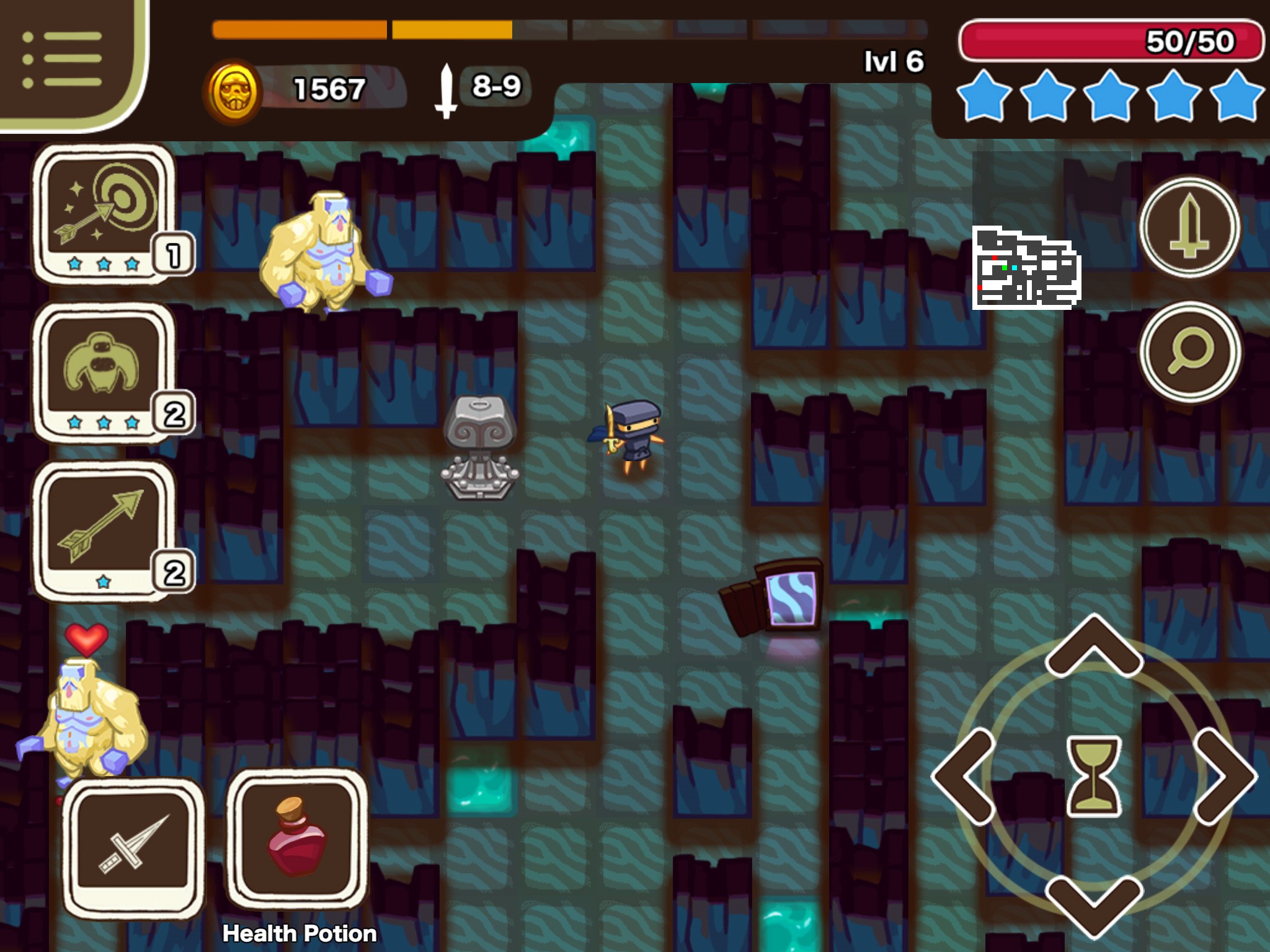 While every class—Farmer, Warrior, Archer, Thief, Vampire, and Wizard—is technically viable, Sproggiwood’s focus on direct combat and melee enemies gives a distinct advantage to any class that can attack from a distance. It’s still fun to swap classes between stages, thanks to their different play styles and gold bonuses for completing levels, but it does make seemingly badass jobs like Warrior and Vampire feel disappointingly weak.

Since most enemies have the same attack style—hitting Cloghead when they’re within one square of him—you’ll rarely have to switch up your strategy in a dungeon. This leads to a pretty straightforward game of letting baddies come to you and avoiding being surrounded. While this is another boon to new players, experienced dungeon crawlers may find themselves yearning for more variety and challenge. 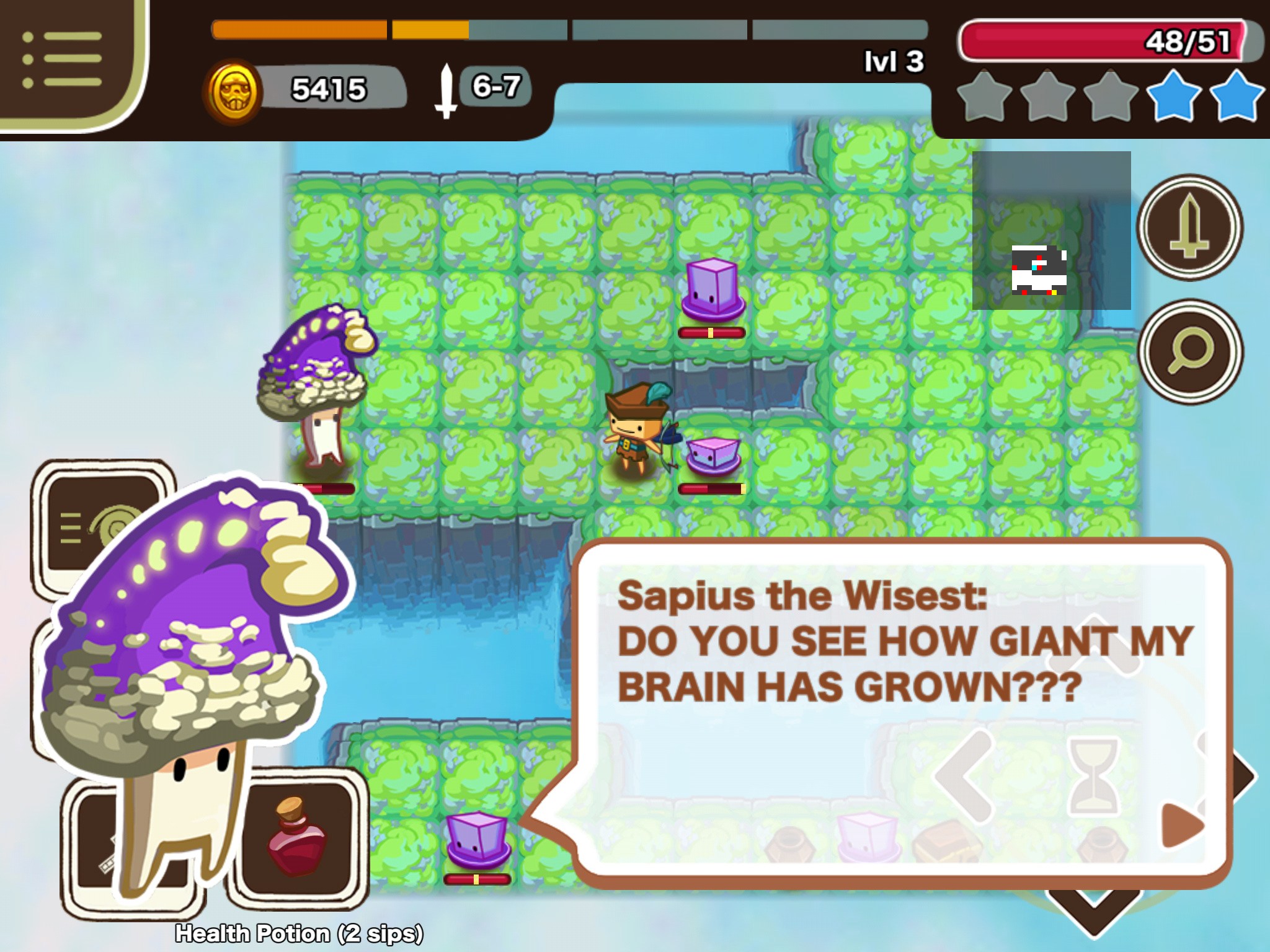 Luckily, there are a few randomization options that can throw a weird wrench in your run. Cryptic shrines are found scattered around stages and, if touched, will provide a random “reward.” Players that take this gamble may be fully healed or given a new weapon, or they may be surrounded by dozens of deadly slimes or open a portal to a world of powerful, bizarro enemies.

Another randomizer, and one of my favorite objects in the game, is the usable “Identity Crisis” potion. This item scrambles all four of your character’s skills, assigning random abilities from other classes. With this, you could end up with an Archer that can summon yetis and throw pitchforks, or a Wizard that can drain health and use a tanky shield. 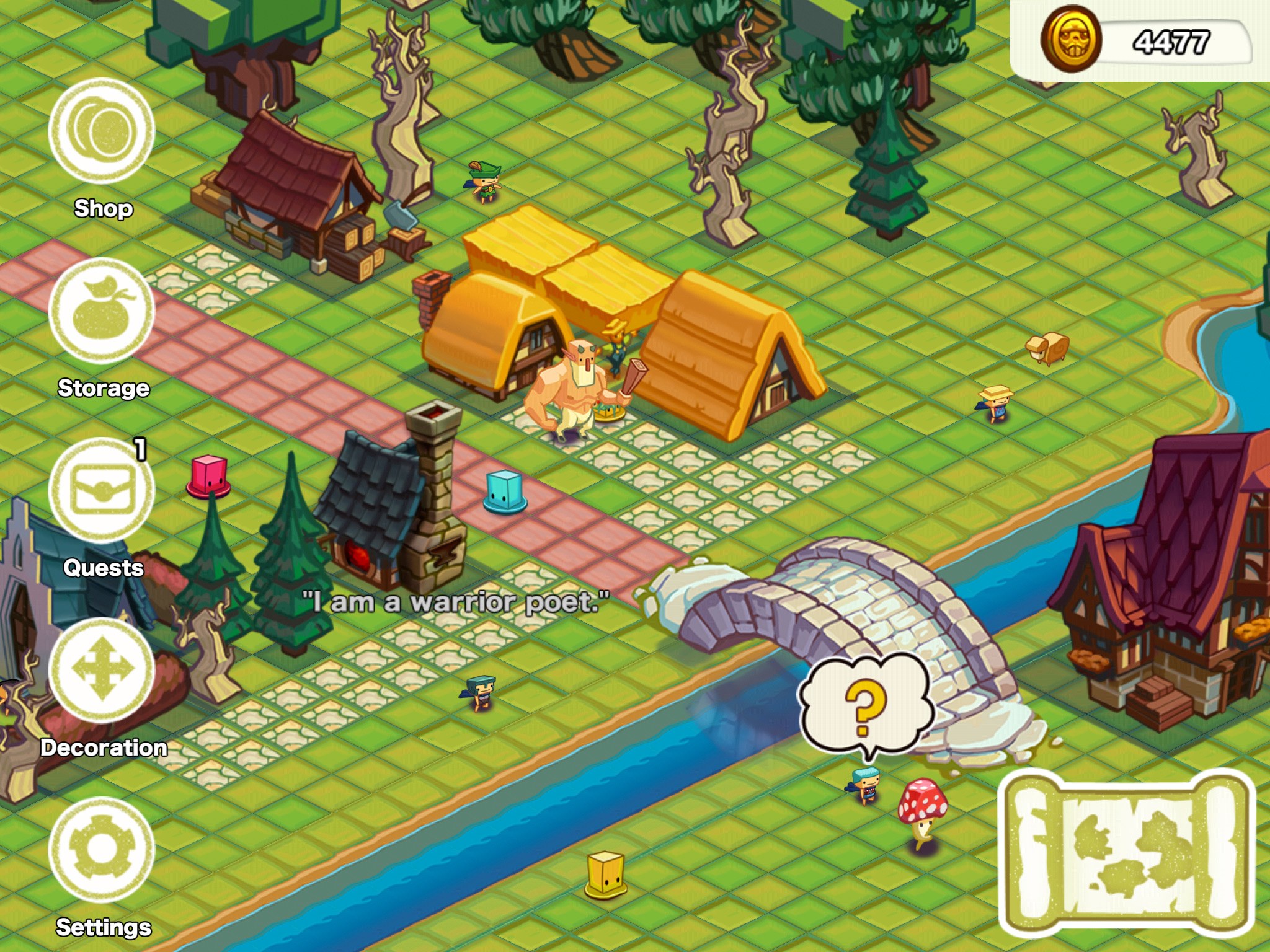 When you’re not dungeoning, Sproggiwood offers a simple town building sim as an aside. This home base is primarily used for buying upgrades, but you can also place buildings and decorations for the monster citizens that move into Sproggi’s growing civilization. While the personality that’s present throughout Sproggiwood is visible in your citizens’ random dialogue bubbles, this sim does feel a bit tacked on: it’s entirely optional and doesn’t affect the gameplay in any way. Earning damage bonuses against acquired species or new items in the shop if you meet building requests would have been a nice way to tie the two areas of the game together.

Even ignoring the town sim, there’s plenty to do and love in Sproggiwood. The adorable graphics and humorous writing bring every detail to life, from talking sheep to vampiric mushrooms. The dungeon crawling, while light on strategy, is still extremely engaging thanks to the variety of items, classes, and randomization options found on every level. The finite stages are perfect for short-burst gameplay and the touch controls are a flawless fit for the turn-based, single-square movement. Thanks to the forgiving difficulty and appeal to roguelike newcomers, there’s really no way to lose: but it is easy to get lost in Sproggiwood.