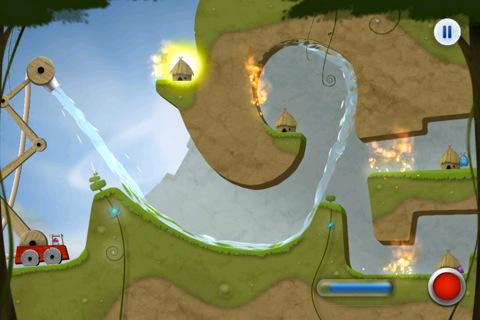 If there’s one immutable truth we’ve known since caveman days, it’s this: fire is good. It cooks our food, warms our bodies, and helps us destroy our enemies. But fire can also be bad. Like when it’s raining down from the sky and burning the homes of adorable little alien critters. Luckily those critters have a fire department to help fight the blaze. Namely, you.

Fighting fires is the name of the game in Sprinkle. To do this, players will aim a fire hose at emerging blazes before they have a chance to spread and consume every little thatch-roofed hut in sight. The hose in question is mounted on a ladder, so players will need to adjust both the height and the angle of the nozzle to get the water where it needs to be.

It’s a simple sounding premise, but like any good residential development, the unique and somewhat hilly design of each neighbourhood makes for something of a challenge. Trying to work your way around the land with your spray, as well as using your spray to move the occasional boulder or wooden object into a more fortuitous place, will quickly become par for the course. This is a puzzle game through and through – it’s all about finding the path of least resistance for the water to travel from your hose to the growing fire.

Visually, Sprinkle is an absolute knockout. Water physics are hard to get right – especially when spraying out of a hose – but the developers at Mediocre have created water movement that mimics the real thing with uncanny results. It reminded me a lot of PixelJunk Shooter in this way, and if you’ve ever had a chance to play the PSN classic, you know that’s a good thing.

The audio presentation adds a level of cuteness to the proceedings, though I couldn’t help but be reminded of the sound design in Nintendo’s Pikmin – both in terms of music and creature sounds. Moving past that, both the sounds of water rushing and fire crackling are magnificently realistic.

But while both the gameplay and presentation are a treat, the puzzles themselves simply aren’t all that hard to figure out, rarely takes more than a single try to get things right. Some later stages may require repeated attempts, but this has less to do with figuring them out and more to do with executing your plans successfully. All in all, you should be able to tackle everything the first two worlds in Sprinkle offers you in under an hour.

I have to emphasize the first two worlds here, because while the puzzling in Sprinkle is fairly easy, unlocking World 3 and beyond is incredibly hard.

Sprinkle uses a unique system of unlocking levels that rewards good performance, but doesn’t necessarily let you proceed to the next level as a result of having beaten the previous one. You’ll be rated on your performance by how little water you use to solve each puzzle, and unlocking other puzzles requires you to save a certain amount of water. So if you breeze through a levels spraying your hose all willy nilly and running the tank completely dry, chances are you won’t unlock any new levels despite completing all of the preceding ones. 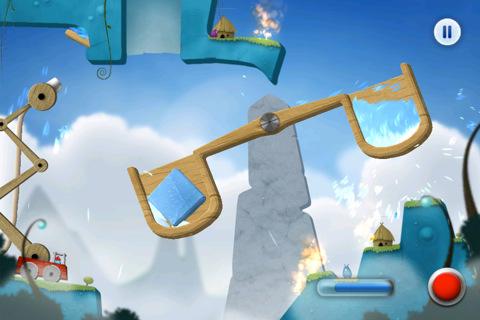 The added degree of challenge this brings is nice, but it kind of feels like a cheap manuever to force replayability. What’s more, to unlock World 3 you’ll need to net a perfect score on every stage in Worlds 1 and 2. This is a feat that’s monumentally difficult, and will probably result in your favorite mobile device careening into the nearest wall long before you ever come close to completing it. And after that, there’s yet another world to unlock.

Of course, the developers are more than happy to let you circumvent their stringent World 3 and 4 unlock policies – as long as you given them an additional 99 cents for each. Worse yet, the game doesn’t bother to explain that these additional worlds canbe unlocked by netting those perfect scores, instead making gamers think their only option for further play is to make an additional purchase. It’s a system that’s designed to push you towards needlessly spending more money, and it’s one that I hope Mediocre Games decides to do away with in the future.

Sprinkle is both fun to play and beautiful to look at, but the low level of puzzling challenge combined with the impossibly difficult unlock requirements make it a tougher recommendation than it should be. For an App Store filled with physics puzzlers, there sure seems to be a drought of good puzzle games on iOS that play with the physics of water. Sprinkle fills that empty bucket nicely – but not without fault.

UPDATE: We spoke, they listened

In our original review that was published alongside the game’s launch on August 25th, our biggest complaint about Sprinkle was how frustratingly difficult it was to proceed beyond World 2. You’d either need a perfect score on every level before it, or you could pay a little more money and unlock the remaining levels via in-app purchase. It really rubbed us the wrong way, and it would seem we weren’t alone.

Since the time of our complaint, the developers have released an update that solves the issue completely. Unlocking worlds is now a much easier prospect, and the in-app purchases have been removed from the game completely.