Home / Reviews / Sprill – The Mystery of The Bermuda Triangle Review

Sprill – The Mystery of The Bermuda Triangle Review 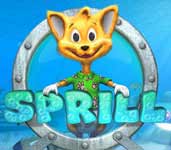 Sprill – The Mystery of the Bermuda Triangle starts off with the line “It was a sunny day in the Bermuda Triangle…” which is a sure sign that something is about to go wrong! Sprill the fox is spending a quiet afternoon on the ocean when he is kidnapped by aliens and taken deep under the sea! He is forced to help them solve the mystery of a magical pearl before the aliens will let him go.

Sprill’s alien captors direct him to a series of underwater locations to begin searching for clues to unravel the mystery of the pearl. If Sprill is successful, the pearl can be used save the planet, but it won’t be easy to find.

This new hidden object game begins when the aliens send you to a sunken ship to start your quest. A list of items to find within each setting will appear on the side of the scene and you will have a (rather generous) time limit to find the needed items. Search high and low to find everything by scanning the setting and clicking on the items as you locate them. If you get stuck, you can use a hint to help you, but don’t waste them or you might find yourself out of luck.

The various items are all hidden within the background. Some are very easy to find but others take a lot of hunting and hawk-like vision to spot. However, within almost every level, there are additional hints you can earn by finding variously shaped and colored question marks and clicking on them. These will become very useful as the timer runs low or if you have to find items that you aren’t familiar with, such as a balalaika or numbers of amphorae.

After every few levels, you will have to complete a different mechanical puzzle in order to proceed to the next location. These puzzles are similar to the ones found in the Mystery Case Files games, though far less challenging. There weren’t very many of them, which is a shame as they break up the monotony nicely.

Within these puzzles, you will be presented with a challenge such as finding a magic shell. In order to accomplish that goal, you will have to figure out a series of steps to maneuver the items on the screen. For instance, one of the puzzles involves dropping lead weights (perhaps cannonballs?) through peg boards onto a seesaw style contraption and then launching one of them up in the air and catching it with a magnet. Once you move the magnet to the center of the screen, a magical item appears.

There are no instructions given for the puzzles, the challenge lies in figuring them out all on your own, however, for a time penalty you can use a hint to skip ahead to the next step in the puzzle. Although this can be really helpful, you need to keep an eye on your time limits for the hidden object levels. If your time gets low, the aliens will yell at you to hurry up! The nerve!

There are over 35 levels to explore, though some of the scenes do repeat. A wide variety of objects helped keep the game interesting, though in many levels you are required to find more than one of an item, such as 3 glasses or 4 shells.

As far as the difficulty of the game goes, it’s middle of the road. I found it slightly harder than games like the Big City Adventures and the Little Shop series, but easier than the Mystery Case Files games. Some of the object names were a bit misleading, like when I was asked to find 3 clocks, but one of them was a sand timer. I didn’t have trouble finding the items within the graphical scenery as they were almost always clear and easy to distinguish. The question mark hint bonuses were not very easy to locate, but definitely helpful!

There wasn’t much of anything new in Sprill. The puzzles were different, but similar to the mechanical puzzles in other games. The levels and user interfaces were almost identical to every other hidden object game as well. The graphics and sound effects were well done and the storyline was cute enough to inspire me to finish the game. After all, who doesn’t love aliens and foxes and saving the planet?

If you’re a fan of hidden object games, then at least try the demo of Sprill – The Secret of the Bermuda Triangle, but I do suggest that you try before you buy as you may feel that there is nothing special here. Then again, the urge to find the magic pearl may be too much to resist.