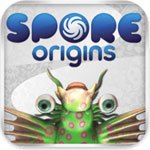 Back in 2006, Spore creator Will Wright had proudly announced that the game would be playable on pretty much every device known to man. If you’re toaster didn’t run a copy of Spore it would have been seen as a failure in Wright’s eyes. Flash forward two years. The game doesn’t exactly make its way to the Wii or Nokia n-Gage as promised. In fact the only devices you find Spore on are the PC, Mac and iPhone. But could the iPhone version possibly offer everything it’s PC counterpart did?
While other iPhone ports of PC games like The Sims 3 and Civilization Revolution have generally retained the same charm and experience as their desktop brethren, Spore Origins only reproduces the first, very short segment of the game. In Origins (as in the first stage of Spore) you’ll live the life of a single-celled organism trying to evolve their way out of the primordial ooze. Evolution occurs as you eat smaller creatures and earn special evolution points that can be spent on upgrades that will improve your characters hunting and defensive skills.
Defense is an important part of the game. While hunting for your own food, bigger creatures will be hunting for you. Attaching a spike or a pincer will let you attack some of these bigger creatures, but until you’ve evolved some good defenses it’s best to stay out of their way.
The game spans 30 levels that will each take you around five minutes to complete. That should provide the game with a great opportunity to change things up, but every level feels exactly the same. Every so often you’ll be faced with a level that will play more like a maze, and you’ll need to find the end to complete it. Other than that though, every level feels like a carbon copy of the one before it.
The game utilizes the iPhone built-in accelerometer, relying solely on tilt controls to navigate your creature. Some games seem to be able to pull this off well, but here it feels awkward and somewhat delayed. With no options to adjust tilt sensitivity, what you see is what you get. Sure you can adjust relative tilt angle, but unless you’re constantly going from sitting to standing to lying down, there’s usually not much need for that tweak. And if you are doing those things, don’t think this will help you — you can only access the options menu by exiting out of your game.
That’s not to say there aren’t some nice elements to the game. You’ll be able to import a picture from your iPhone photo library to use as a skin for your creature, which helps to give it a very unique personality. As well, the game does give you a small taste of what the Spore world has to offer. If Spore Origins turns even one person on to buying the PC or Mac version, that was money well spent. If you’ve played Spore before though you’re going to find this to be a tiny slice of gameplay that doesn’t hold up nearly as well as its full version counterpart.
Spore Origins is hard to recommend even at a sale price. The full version of Spore is a fantastic game that takes evolution from single-celled amoeba to space-faring civilization. If you have any interest in this series whatsoever, skip this iPhone version and go for the keyboard and mouse. As much as Spore fans may want to like this, it’s nothing more a stripped down version of something that’s already offered elsewhere, and one that doesn’t handle itself nearly as well.