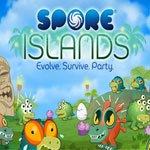 Spore Islands takes the species-creation idea of the hit PC game Spore and sets it loose in a science experiment type environment. What would happen if I tweaked their diets? What if I reduced their defences? What if I introduced two more species into their world? Spore Islands is a god game in the truest sense of the word. Create creatures, tweak their existence, and let them run amok to see what happens.

Unlike other versions of the Spore franchise you'll never actually control an individual creature or group. Instead you'll create a species, determine its statistics, and observe as it interacts in an environment with other creatures. You'll earn points as a result of their “biomass,” or how much your collective species weighs at any one time. This means that you'll want to have meaty creatures that live for a while and have lots of babies. Every pound of creature on the screen during every turn will count towards your points total. But creating the perfect creature isn't an easy task.

Once you've created your species, you'll need to set it loose in the wild to see how it performs. You'll do this through “observations,” which comprise of 150 turns where you'll simply watch and see what happens. This is where you'll earn your score, which in turn can open up more options for your creature as the game goes on. You'll be given 12 observations per day, but if you use these up you'll start earning new ones at a rate of 2 per hour.

After each observation you can evolve your creature using DNA tokens. This will let you tweak your creature's diet and behaviour in the hopes of outperforming every other species on your island. You'll be given a set amount of DNA each day to fool around with, but if you're impatient you can always purchase more with real world cash. You can even outfit your creatures with wacky hats or horns, and personalize your animations.

Evolving isn't as simple as buying yourself better stats with DNA. Each of your evolvable stats is part of a certain set, and the total number of stat points that can be used in a set needs to equal 12. So if you want to improve your attack skill you'll have to reduce your defence so that your strength set doesn't exceed 12. Like all things in the natural world, evolution in Spore Islands is less about who's strongest and more about maintaining balance.

Once you achieve a certain point total you'll be able to create new creatures. These new creatures can travel off on their own adventure, but they can't share the island with your first creature. This means you'll need to recruit some friends into Spore Islands so that your new creatures can have a home. Once they're visiting with your pals, you can use your observations to see what's happening on a friend's island. The points earned when visiting another island, both for your creature and your friends, will remain whether your friend is online or not. The more friends you invite, the quicker your creatures will grow.

Once you get your creature tweaked to win against the current competition, there's very little challenge to be had in this social game. There's actually very little to do. Clicking “observe” and watching your creatures in action is all well and good, but asides from a few tweaks that's the bulk of what Spore Islands has to offer. It's a very passive game, and that's not something that is going to hold a great deal of appeal to most gamers.

We definitely liked the “let them run loose” mentality behind Spore Islands, but free range gaming just isn't as exciting as it sounds. With a minimal amount of interaction, the majority of your fun will come from seeing if your stat tweaking can snag a better score than your friends. It's not without its merit, but Spore Islands simply doesn't offer enough gameplay to hold our interest.