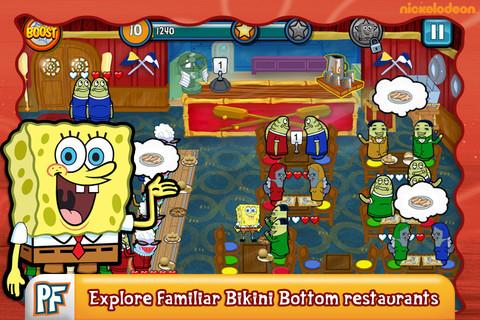 SpongeBob Diner Dash Deluxe is as plain as a Krabby Patty without ketchup, mustard, or pickles

As a character, Spongebob Squarepants is perfectly suited for the Diner Dash formula. After all, he is probably the only creature in existence who thrives as an employee in the world of fast food. And while the little sponge certainly seems happy enough in SpongeBob Diner Dash Deluxe, the game breaks down into a pretty basic Diner Dash experience. It’s fun for a while, sure, but given the playful nature of the SpongeBob universe, it could have gone that extra mile to be especially memorable.

If you’ve played Diner Dash or any of its various offspring, then you’ve already been trained to play SpongeBob Diner Dash Deluxe. The game takes place across several restaurants that are based on the popular cartoon, which means a whole lot of undersea dining in Bikini Bottom. SpongeBob must seat customers (preferably at booths that match their outfit colors—Neptune forbid that diners be allowed to clash with their environments), take orders, serve food, present the bill, and then clear away the dishes in time to seat the next schmoe. If customers are made to wait for too long, they get extremely irritable, leave fewer tips, and might even walk out. Oh man, don’t tell Mr. Krabs. Not if you value your yellow spongy hide.

True to Diner Dash tradition, SpongeBob can use his tips to buy upgrades. Certain upgrades make customers more patient and agreeable (do said upgrades slip a little “something” into the breadsticks?), while others turn SpongeBob himself into a kind of a bionic super-waiter who can move faster. When things get really hairy, SpongeBob can even enlist the help of his friends to make customers happier.

As a basic game, SpongeBob Diner Dash Deluxe is perfectly fine. The name says “Diner Dash,” and that’s what you get—but with an extra splash of yellow. That’s just the problem, though. SpongeBob is certainly present in the game, as are his friends, as are the weird-looking fish-people of Bikini Bottom, but none of them do anything that’s particularly crazy, funny, or interesting. 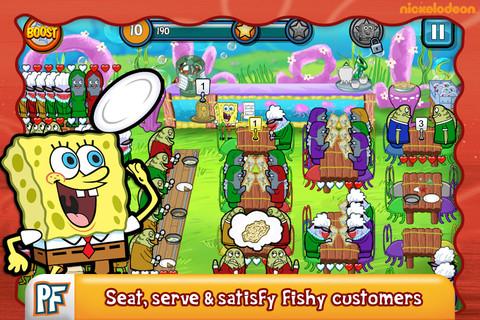 The title’s lack of antics might not have even been a problem if we’d not already been spoiled by the surprisingly excellent SpongeBob’s Super Bouncy Fun Time just a couple of months ago. Super Bouncy Fun Time is funny, addictive, adds new spins on old gameplay formulas, and utilizes mountains of voice clips. SpongeBob Diner Dash Deluxe, on the other hand, feels like a standard licensing tie-in that slips new clothes onto old characters.

Again, other than a blatant lack of effort to do anything really cool with the SpongeBob license, there’s nothing offensive about SpongeBob Diner Dash Deluxe. Kids will love it, especially if they haven’t played a Diner Dash game yet. It’s just unfortunate that Nickelodeon didn’t expend a little more energy on making the game a true delight for the show’s older audience. And I assure you – that audience totally exists.