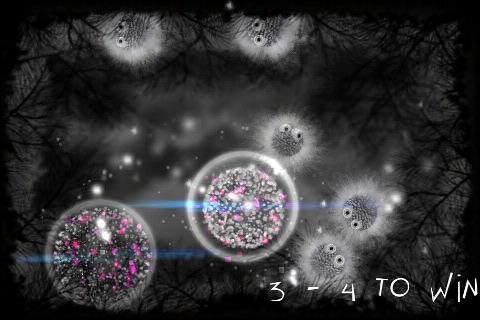 Games that use random elements of chance often lose their appeal quickly. Peggle managed to take that randomness and craft a fabulous game around it. Splode, while not as sublime as Peggle, brings a fun arcade title to your iPhone.

The premise of Splode is amazingly simple. The world has become a dark place, and spores called Splodes are here to help. By popping one of the flower buds bordering the screen, the spores can be destroyed by hitting them with the shockwave from the pop. This in turn causes the spores to fly off and pop around other spores, making a chain reaction. As long as you pop a minimum number of spores, the flowers open, the sun returns and you progress to the next level.

At first, the spores are large, and there are few of them. Later levels require you to pop over 35 spores out of 50 or more, so the critters get much smaller and crowd the screen.

Although figuring out the mechanics of the game takes little time, trying to figure out the slow-travelling spores’ movement patterns takes significantly longer. You only get one pop per level, so unless you manage to push a spore or two into a cluster right away, you’ll have to retry. It is this random behavior that made Peggle so great, but sometimes is a hindrance in Splode.

Despite the fact that you think you know where the spores will go – and often, you’ll be right – sometimes they fly off in a different direction than intended. Other times certain spores will spontaneously change direction right before a spore pops, missing them. Though not hair-pullingly frustrating, the game sometimes feels a little bit arbitrary.

Fortunately, Splode keeps you coming back by presentation alone. The graphics are some of the most hauntingly beautiful on the iPhone. Each spore is beautifully detailed, and you can almost smell the pollen on the flowers. As the screen changes from night to day, the colors become more vivid, more alive. The spores pop not with an explosion, but with music. Each subsequent pop triggers a harp chord or short melody, creating a natural symphony during gameplay.

If you’re fortunate enough to have an iPad, Splode absolutely shines. The details on the graphics become that much more vivid, and the added screen space makes tracking vast numbers of spores much easier in the later levels. The larger screen also seemed to make discerning the movement patterns easier as well.

Sadly, Splode suffers from the promise of updates but not much in the initial package. Splode only has two modes: challenge mode, described above, and score attack mode, a kind of endurance mode where you get five pops to reach a milestone score and replenish your pops. It’s not that either of these modes are bad, just a bit slim. Requests to “stay tuned for future updates” from the developer makes you wonder how much of the game is missing.

In the meantime, until the content arrives, Splode remains an enchanting if short-lived experience. It’s a fun, beautiful, zen experience, particularly so on the iPad. The game has promise, and is definitely worth your time and investment.