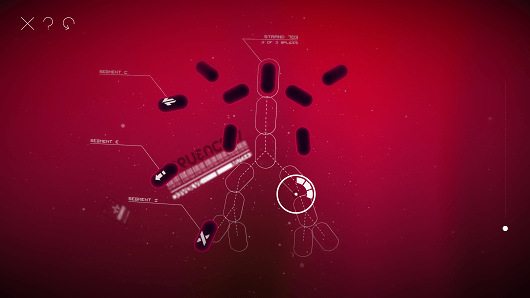 You know what we can’t stand? Video game tutorials. Nine times out of ten a tutorial will either be walls of text that we’re clearly not going to digest properly, or half an hour of “do this simple thing”, “now do it again but with an added element” and repeat until fin. The best tutorials are those which either incorporate the teaching into the gameplay, or let us figure it all out for ourselves.

Cipher Prime’s latest release, the puzzler Splice, is a prime example of this. For the first 10 minutes or so of play, you’re not 100% sure of what you’re meant to be doing, and random clicking is the dish of the day. Then, just moments after you’ve uttered the words “what the heck am I supposed to be doing”, you’re relishing in one of the freshest and most mind-blowing puzzle games you’ve played in a long while.

On each of Splice‘s microscopic levels, you are tasked with pulling apart and piecing back together a series of microorganisms, such that they fit precisely to the design document. This involves experimenting with how the structuring of the organisms works, and the various tricks you can implement to get everything in the right place.

However, you can’t simply keep throwing bits and pieces all over the place and hope for an easy victory. You’ve only got a set number of splices, and once those are all used up, you’re stuck. As you progress through the game, new elements are also added, such a splitting organisms and explosive ones. You’re constantly left to your own devices, as you attempt to work out how new bits work in the world of Splice.

Since the game throws you in at the deep end, the confusing soon becomes the downright incredible, with numerous moments of pure genius. On around half a dozen occasions we found ourselves sitting back, mouths wide open, simply admiring our handiwork and wondering how we even managed to get to that point.

Essentially, Splice makes you feel dead stupid and dead clever over and over again. You’re going to be doing that for a while too, as there are dozens and dozens of levels to beat – even when you destroy the main game, that’s only half of the levels available, as a whole bundle of seriously difficult ones rear their heads.

Feeling stupid doesn’t equal feeling frustrating, however, as Splice comes with gorgeous rewind and fast-forward functionality. By scrolling the mouse-wheel, you can go back a step through your solution, and even redo a move if you realise it was right all along. It makes for some smooth and seamless gameplay.

In fact, the entirety of Splice is presented so beautifully that you’ll find yourself completely engrossed in its world. The piano music is enchanting, much like in all of Cipher Prime’s other releases, and the visuals, coupled with the stripped down interface, are perfect for the subject matter. Indie developers – if you want to know how to make a game really stand out, look no further! 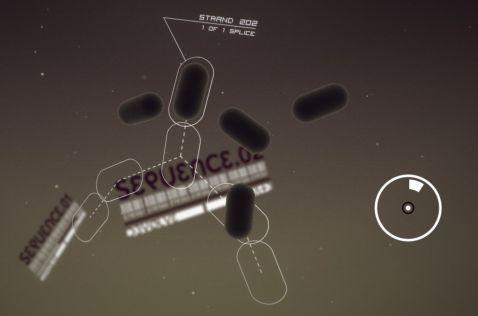 Our only real concern is that if you get stuck on a particularly tricky level during the main campaign (and believe us, you will get stuck multiple times), there’s no way to skip the level and move on to a further one, then come back to it later. This could very well prove a breaking point for more casual players who simply don’t have the time to sit and do the same level over and over until the solution finally presents itself.

Splice is absolutely essential puzzle gaming, and is the perfect way to spend an evening, then a lunch break, then a few more evenings and lunch breaks after that. It will make you feel like the god of puzzles, even if you aren’t completely sure what you’re doing some of the time. Make sure you grab the demo from Steam.