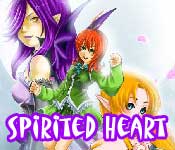 A simulation/role-playing game from independent Italian studio Winter Wolves, Spirited Heart puts players in the shoes of a young woman living in a medieval fantasy city who works to earn a living while trying to win the heart of one of six bachelors. It’s a simple and potentially appealing concept. Alas, its frustrating character growth system and unfair game design makes it difficult to give this romance sim much love.

Players begin the game by choosing one of three women; a human, an elf, or a demon. Each comes with her own fairly predictable initial traits. The human is strong, the elf excels at magic, and the demon is a sultry seductress. These attributes determine the kinds of jobs they are best suited to take on (humans, for example, make good farmers while demons are excellent dancers).

However, their strengths and weaknesses can be easily modified during the game’s prologue, which has players choosing one of four childhood homes and families. Choose to be parented by an army general and your avatar will become skilled in combat; choose to be raised by an artist and your character will lean towards a life as an artisan. A few character-altering decisions, such as how your avatar deals with a parent’s birthday, provide additional opportunity to modify base attributes.

This preamble takes about five minutes to play out, at which point the game proper gets under way.

Play consists of a series of static screens filled with action options, dialogue trees, jobs, and statistics. Each turn lasts a week in game time and begins with the player choosing to work, train, or relax. If you choose to work you’ll need to select a job for which you are qualified based on your character’s skills. If your morale or health is running low you’ll need to take a vacation to rejuvenate yourself. And if you have extra money to spare you can invest it in training for a particular skill.

Mixed in with these activities are random events-robberies, mistaken identities, an old woman requesting your help-as well as flirty encounters with the game’s six available bachelors. All of these scenes take place in the form of text dialogue with a still image of your character (or one of the bachelors) reacting to what is being described.

And that leads to the game’s first serious issue. The narrative is terribly tedious.

The manga-inspired art is fine, but there is precious little of it. Just a handful of backgrounds and character drawings that are recycled ad nauseam.

What’s more, the text is terribly written. Take this example, which contains (by my count) eight glaringly obvious grammatical/typographical mistakes:

"Your father has his own private library which is locked at all time and nobody but himself has the permission to enter. Yet one day, you notice that he forgot to lock the door, so you could manage to sneak in and take a peek inside, while the servant’s aren’t watching you."

This passage is indicative of the quality of the game’s written material as a whole. Translation issues are one thing, but many of Spirited Heart‘s textual problems could have been resolved with a simple, automated spelling/grammar check. It just feels lazy.

An even bigger issue than the game’s writing is the nonsensical and exasperating means by which our characters are constantly evolving and devolving. Most actions, be it a week at work or a decision to help someone, carry with them unpredictable consequences. For example, one of the weeks that my avatar spent gardening ended with her saying she did exceptionally well and that she earned more than her base pay, but also resulted in significant and completely unexplained decreases in three separate attributes on my character sheet.

This sort of thing happens constantly, making it extraordinarily difficult to raise or even maintain the level of any character skill. It’s extremely frustrating to spend a year of your character’s life working as a builder to try to raise her strength trait enough so that she can take on a more advanced, higher paying job only to have that trait mysteriously begin dropping when you take on a job to raise another required attribute.

What’s more, skill training is all but useless. It often takes months of work to earn enough money for a single training session that will raise an attribute only a few points-points that could randomly and inexplicably evaporate the next time you go to work.

And I haven’t even touched on the game’s nonsensical taxation system (guards take up to 50 per cent of your savings-not earnings-every four months) or the fact that you could spend all of your time courting a particular gentleman only to have your character randomly decide after a single disagreement that he’s not for her and state she will never again meet with him.

It all ends when you get married or, more likely, after ten years of game time has passed and your avatar turns 28-because women apparently become unsalvageable spinsters devoted to their hobbies or careers in their late twenties. But I’m not complaining about Spirited Heart‘s short length; a couple of hours with this game is more than enough to know that there are plenty of other ways I’d prefer to spend my time.

Department 42: The Mystery of the Nine Review