Spirit of Wandering: The Legend Review 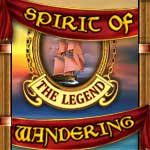 Hidden object fans will swoon over the romantic hidden object adventure Spirit of Wandering: The Legend. It’s the tale of a female pirate captain who loses her crew – including her lover, Jack – during an attack by the infamous ghost ship the Flying Dutchman. The crew aren’t dead, but merely imprisoned in the spirit world, which means the captain must use her compass and Jack’s magic orb to get them back.

Since spirits have a tendency to return to familiar places, the captain travels to locations that were important to her six crew members in an effort to pull them back into the world of the living. In order to do this, she must recover a series of items, including special “cherished” items that were especially important to each crew member.

Each location is split into several sub-scenes that contain a blend of normal and cherished items to find. Cherished items are unique in that they phase in and out of the real world, and can only be seen by holding the magic orb in front of them. To active the orb, you’ll first have to find a short list of normal items and click on them with the mouse to cross them off a list. Once the orb is activated, it acts like a homing beacon. By listening to verbal cues and watching as the flames of the orb burn brighter, you can pinpoint the local of the cherished item and get it to show up.

Item descriptions are more imaginative than the usual fare – expect to search for “Grecian pitcher of brass,” “the curved blade of a soldier,” “a pirate’s hand pistol,” and “the bust of a nobleman.” Some descriptions border on riddles: “The home of golden bugs,” for example, refers to a green shield adorned with gold scorpions, while “a container for timely sand,” refers to an hourglass.

The lists of items are logical in the context of the game, and all adhere to an old-fashioned sea-faring pirate culture – for example, there are no CDs, computer, cars or telephones to find here. Rather, you’ll be searching for things like quill pens, compasses, candlesticks, coral and wooden clocks.

When a crewmember is found they will reveal the location of a treasure trove. Treasure troves are fun mini-games where you’re presented with a screen full of gold pieces and treasure, and have to try to click on as much of it as possible in 60 seconds. Replenishing your gold allows you to use your compass to give you hints if you get stuck finding a normal item. As you move the compass around the screen, the needle will rotate to point in the direction of an item.

Spirit of Wandering is bolstered by gorgeous graphics and suitably stirring music that uniquely complements each level. The game offers eighteen scenes set across six locations that include a pirate port, a primitive island village, an underwater grotto and the decks of the Flying Dutchman itself, as well as six treasure troves. This is a respectable number of levels considering that, unlike other hidden object games, you never re-visit the same scene twice.

What’s more, the story is well-crafted and engaging. You’ll get to know the six crew members you’re looking for quite well by the end of the game thanks to colorful descriptions written in a diary-style book, and cherished items that are matched to each crew member’s personality. Khikaru, for example, is the ship’s look-out so it makes perfect sense that his cherished items are a spy-glass and a sexton for navigating.

While I would whole-heartedly recommend Spirit of Wandering: The Legend, there are a few issues worth noting. The first is that the riddle-like item descriptions, while clever, can often refer to more than one of the items on-screen. Finding which of the ten pots that the clue “a clay pot with a handle” actually refers to is a matter of trial-and-error that requires a bit of patience. Other times it’s a simple case of two or more identical items – like barrels and beaded necklaces – appearing in different locations.

Players also can’t expect to rely too much on hints, because it costs the hefty sum of 60 gold coins every time you use one. If you get stuck, you can exit to the map and try another location, or just wait it out – if you wait long enough, the game throws you a bone by briefly highlighting a hidden item. There are no time limits in Spirits of Wandering, so you can take as long as you like, however, if you randomly click on the wrong things too many times in rapid succession, you’ll lose some of your precious gold.

Once story mode is completed, players can go back and play scenes individually in Advanced mode. As for the story itself, it offers a satisfying conclusion while dangling the carrot of multiple sequels to continue the adventure. We’ll be waiting!