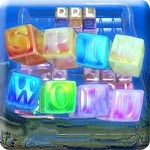 Do you ever feel guilty while vaporizing aliens or matching colored gems on your computer? At least when you play a word game, you’re exercising your brain, allowing you to both have fun and work out your grey matter. While most word games offer the mental equivalent of a relaxing stroll on a treadmill, playing the new Spinword from Slam Games is like setting the machine on overdrive.

Everything about Spinword seems to be an experiment in stress. Even the idea behind the offering takes a moment to digest: The game consists of a progression of 60 levels. To win a stage, you must form words from blocks that, according to the instructions, “fall up” your screen. Each block contains four letters, and while falling, can be rotated using Z or X. The arrow keys move blocks left or right.

Your goal in Spinword is to spell words containing three or more letters as blocks accumulate on your screen. In general, once you form a word horizontally or vertically, it disappears. It’s important to avoid wasting blocks since reaching the bottom of the board results in the end of your game. It’s also a good idea to work fast since each level is timed. Let the clock run out, and you’ll be shown how to spell “Game Over.”

As Spinword becomes tougher, the game places more and more obstacles on the screen at the start of each stage. Indestructible Red Stones, for example, can be a nuisance as you navigate your block past them to where you’re trying to form a word. However, Glass Bombs, which sometimes appear in the place of a block after you’ve spelled a word, can be used to destroy Silver Stones. These are a walk in the park compared to Rotating Blocks, which cycle through four letters as they sit on the game board. Their presence forces you to memorize the letters they contain and determine whether or not the block you’re guiding has something that will fit.

Using these basic building blocks, the developers throw a variety of challenges your way, prompting you to change your strategy from level to level. For example, on one stage, you have 70 seconds in which to spell four words, each of which disappears upon completion; during another level, you’re given almost three minutes to form 12 words, but the blocks don’t disappear. This means you’ve got to create strings of letters that spell several words. I used “randy” (no snickering), which also gave me “ran” as well as “and.”

A bonus mode allows you to play a single level as long as you can. In this mode, rows of letters occasionally form at the top of the board, pushing the letters you’ve placed toward the bottom of the screen. Four difficulty levels ranging from Relaxed to Fiendish are available.

Spinword also gives you badges for completing difficult tasks, such as spelling a nine-letter word. Ten of these are available, but few are easy to acquire.

Spinword might sound good on paper, but in practice, it’s not much fun. For starters, choosing letters is akin to guesswork since you don’t know which letters will come next. While those of you who enjoy seat-of-your-pants gaming might consider this a plus, it can lead to mounting frustration if you try to form anything more complex than four-letter words. The multiple Rotating Blocks seen in some levels worsen this issue.

Moreover, you have just one life, so if you blow it on level 12, you lose. You can start a new game where you left off, but your score is reset. Combined with the inability to plan ahead, having no extra lives discourages the taking of risks, so you might as well be blasting aliens or swapping gems as opposed to playing Spinword. I beat one level with a stationary C block by spelling “con,” “cat,” “car,” “can” and several other three-letter words, but I didn’t swell in victory afterward.

There’s also an issue with the dictionary used to determine when a group of letters creates a word. While Spinword never missed a regular word, it read odd groups of letters as words on a frequent basis. After the game congratulated me for spelling “tas,” I looked up the word online. The Web site I used found three acronyms, but that was it.

Beyond that, the interface for Spinword needs polish. The most serious omission is the lack of documented mouse control during gameplay. You can spin a falling block with your left mouse button or mouse wheel, and make a block fall faster with your right mouse button, but there’s nothing in the instructions suggesting this, nor is there a way to move a block left or right. The keyboard works fine (although the response time to input could be snappier), but full mouse support would help take your mind off the controls and free it to form words.

In addition, while your goals for the next level are shown before you begin, these same instructions are nowhere to be seen while playing the stage. There’s a word counter, but you’ve got to remember the rules for the current level on your own, which can be a test in and of itself when the action gets intense.

I should also mention the visuals and audio. Spinword’s soundtrack contains just one song, and if ever there was a bad musical match for a game, this is it. Most logic offerings feature relaxing tunes, but not Spinword. While the composition, which features a warlike orchestral arrangement complete with choral accompaniment, would be at home in a Lord of the Rings title, here, it’s a tremendous distraction. The 3D graphics are pleasant enough, but tend to lag a smidge on the high resolution setting.

Spinword is a unique game. Although Slam Games should be given props for creating a word offering that doesn’t lift its concept from other titles, the execution could’ve been better and the frustrating elements toned down to make the game a more pleasurable experience.