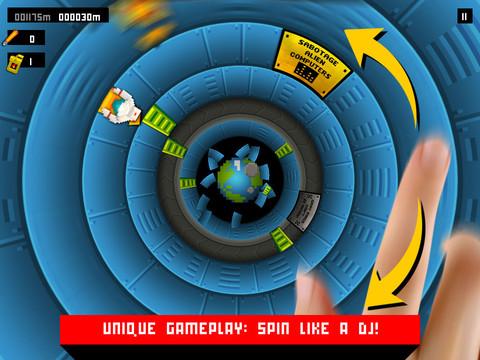 Spin Up is another title in an ever-growing lineup of “endless” games that include Canabalt and Jetpack Joyride. Your goal is to simply to get as far as you can before inevitably failing. Endless games are compelling and addictive because no matter how well you do, you can always play again and do just a little bit better.

In most endless games, you run from left to right to avoid various pitfalls and obstacles. In this sense, Spin Up does something pretty unique: you play an unnamed astronaut who climbs up the inside of a ringed cylinder to avoid being sucked out into space. You don’t actually control the astronaut. Rather, you need to spin the cylinder’s rings to line up ladders so he can keep climbing to safety.

The camera is constantly pulling away from the astronaut as he climbs towards you; you must spin obstacles away and move him through the tunnel. Some rings can’t be spun, and when he hits those, you need to instead spin the ring above him in order to line up the next jump. If you take too long to line up the rings, or if you or work too slowly, the astronaut gets further and further away from you. If you get too far, the ring may fall off and he may get sucked into space.

While you’re making these climbs and jumps, you’ll also have to avoid various obstacles by spinning the rings certain ways. Some objects are more easily dealt with than others. Sometimes you’ll find that a rickety ladder is the only place to jump to, but it’ll only hold for a few seconds. You need to make the next move more quickly to survive.

Other dangers are more immediate. It doesn’t take long before murderous alien creatures show up on the rings. If these baddies are ever directly above or below our intrepid climber, it’s instant death. You can deal with these things one of two ways: spin the various rings to make sure they don’t come near you, or spin and grab one of the various weapons that are sometimes strewn around, which enable you to kill one enemy before the weapon is useless.

As in the other “endless” games one mistake typically means death. Since there’s no way to really “win,” it’s really just a matter of how long you can survive. In a nice twist, the game gives you an overly long and epic-sounding wrap up of your death, which I found to be a fun inclusion. 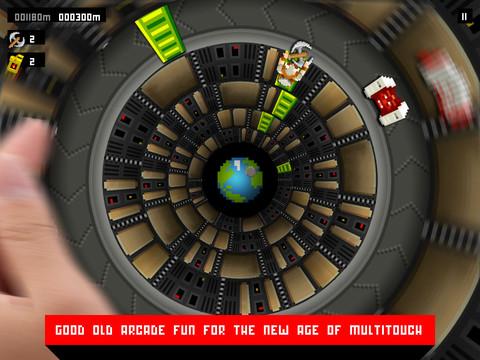 The retro pixel graphics here actually work wonders for the game, since the camera is constantly scaling away from you as you move through the tunnel. The previous rings get blockier and blockier and they move away from you, and the same happens to the astronaut. It’s compelling and reinforces the “I better get a move on” panic that only impending doom can trigger.

As a fan of old arcade games that promote high-score chases, it’s comforting to know I’ll never complete an “endless” game, and can always go back and do better. Spin Up takes that standard formula and adds in a unique take and control scheme, making the entire concept feel totally fresh once again. In a ever-crowding genre, it’s always a good idea to make yourself stand out for the right reasons.