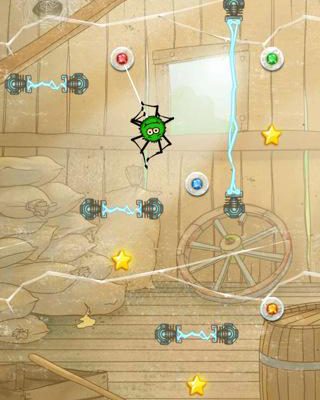 You’d be hungry, too, if you spun all those webs.

How far are you willing to go for a tasty dinner? Do you wake up dreaming about it? Do you risk life and limb on a regular basis so you can make sure you’ve snagged the freshest meal possible? Are you a spider? If your answer to that last question was “no”, then rest easy; the new iPhone game Spider Jack hast that bit covered.

There’s not really much of a plot here other than the titular spider, Jack, is hungry. As a result, he sets out to feast on flies that happen to be stuck in his webs (no wonder Jack’s hungry, he’s been hanging webs up all over the place). Other than that, there’s nothing else in the narrative, but there doesn’t really need to be thanks to the addictive play mechanics.

The gameplay is highly reminiscent of Cut the Rope. Each level starts with Jack looking out from a hidey-hole, whereupon he has to make it to another area in order to grab the fly who’s stuck in a web, peacefully waiting to be eaten. Players tap pegs on the screen for Jack to shoot a webline to; depending on the location, Jack will then climb up his line to the peg or swing down to it. While Jack finds himself swinging (or, sometimes, just hanging still), players have to cut the webline get him to drop and get closer to his winged dinner.

At first the levels are pretty straightforward, but they quickly get pretty complicated. Timing the cuts so Jack doesn’t fall off the screen can be difficult. Not only that, but things like electrical beams, fans, and teleporters eventually start appearing and make things increasingly harder. But, honestly, the gameplay stays fun and challenging and things never feel boring or ridiculously difficult throughout Spider Jack‘s 75 levels.

The other nice thing about the game’s mechanics is that the levels are generally pretty brief, which means this is a great game to play when you’ve only got a few minutes to kill. 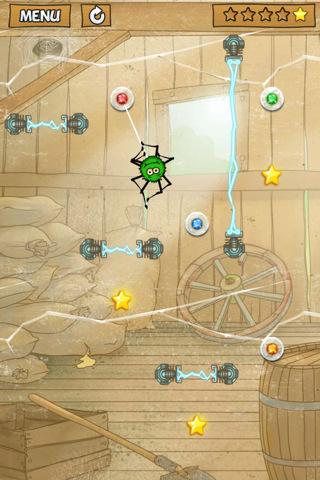 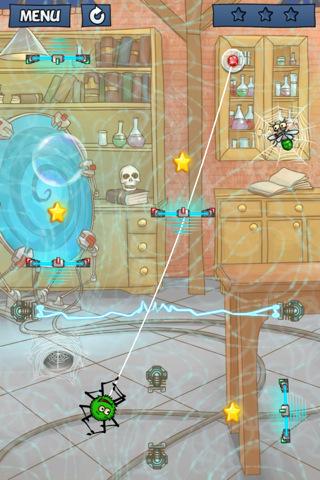 Spider Jack’s graphics are adorable, mainly because of their playful nature. It took me a while to figure it out why I enjoyed the game’s visual presentation so much before I realized that it reminded me a lot of Richard Scarry’s illustration style. Jack himself looks like a green puff ball with eyes, and the backgrounds show environments like mad scientist laboratories and decrepit barns, and they all look really cute.

Spider Jack is a great casual game on the iPhone. It’s easy to learn and fun to play, not to mention the fact that it’s genuinely adorable. Fans of casual puzzle games will love it, as will just about anybody else.