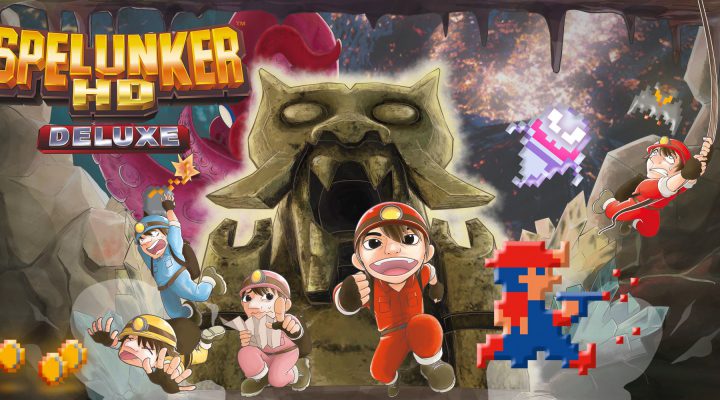 No attempt to smooth out the rough edges

The original Spelunker, made for 8-bit computers, is not an easy game. This port is also not easy. In fact, it’s downright cruel.

There’s no softening of the source material here – ININ Games have basically added a 3D sheen to the nearly forty year old game, but left the underlying mechanics intact. Which is both admirable but also somewhat foolish.

Seeing you tackle a series of small stages based in mines, Spelunker makes sure you feel ill-equipped to deal with the many obstacles and enemies it throws your way.

Not via your equipment though, which you have plenty of – including bombs, flares, and fans – but through the controls.

These are incredibly stiff, as was the norm with early 80s platformers. Your character moves slowly, and your jump is more of a hop.

To make matters worse, if you jump from any height you’ll die instantly in mid-air. Even jumping down to a platform from too great a height (read: almost any height) will see you lose a life.

Once you’ve lost your stock of lives you’re thrown back to the previous checkpoint. And checkpoints are every ten levels.

Now if the above make Spelunker HD Deluxe sound like a work of sheer torture – you’d be right. Playing solo is a severe test of patience and it’s likely you won’t persist with the game for long.

Fortunately the game is not a complete bust due to its co-operative options, added for this Deluxe edition. There’s online play (largely pointless as no-one is on the servers when we tried), but importantly there is a local co-operative mode which supports up to six players.

Suddenly the game’s cruel and archaic nature becomes more tolerable when you have at least one person suffering with you.

And truth be told, there’s some great level design here once you’ve become accustomed to the clunky controls and occasional unfair death. Getting to the end of stages intact after slowly and strategically working your way through the many traps is tense and terrific. Most of the time at least.

Sadly this isn’t enough for us to recommend Spelunker HD Deluxe wholeheartedly. It’s just a little too old fashioned to be consistently enjoyable, despite its co-operative options and heaps of content.