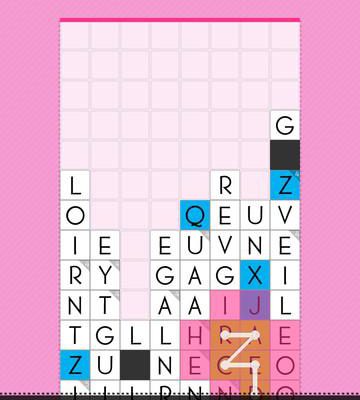 SpellTower does a phenomenal job of reminding me of two very true facts. One; I absolutely love word games. And two; I absolutely suck at word games. It’s humbling to go through life relatively confident that you’re at least pretty smart only to “relax” and “enjoy” some time with a word based game. By the time I’m done playing I feel so dumb that I’m pretty sure the state should take away all the knives in my house and I’m not sure how I’m able to tie my shoes in the morning.

It’s probably worth noting at the head that SpellTower isn’t the kind of game that’s going to do any hand holding with you. There’s nothing here to make you feel better about yourself if your word finding skills aren’t up to snuff. Personally I prefer it that way, but I know not everyone does. So if you’re looking for a game with undo’s or hints or what-have-you then you should probably keep looking. 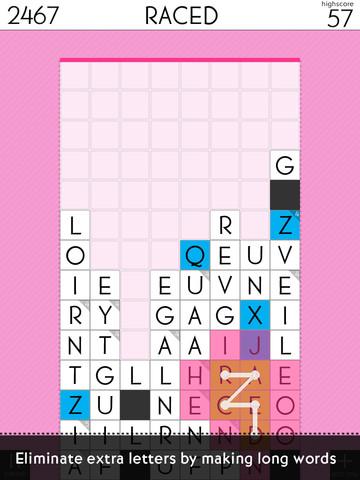 SpellTower is sort of similar to a match-3 game, but instead of tiles with different icons, here they all have letters. To clear tiles you need to spell out words. You can drag your finger vertical, horizontal, diagonal – every which way. Heck, you can even spell words backwards!

Depending on the game mode, you’ll either have a timer to score against, or every time you clear a word a new row of tiles appears. Longer words clear more area and score more points. And using rarer letters in your words (like J, X or Z) will also clear an entire row out for you.

As I’ve already mentioned, my favorite thing about SpellTower is the lack of hand holding involved. Typically in a game like this there would be a built in hint system, or maybe you’d be able to earn some “cheats” in the course of playing. But not here! You live and die by your own abilities, which is pretty interesting since the game requires a diverse set of skills to really excel. 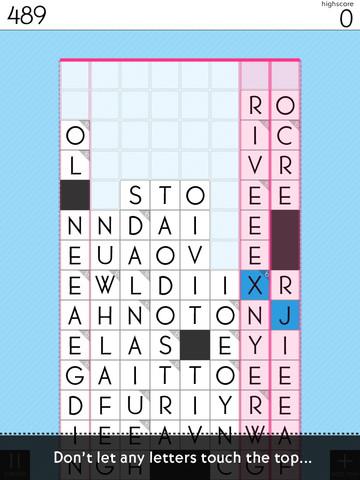 First and foremost you’ll need a solid vocabulary. It’s all fine and good to have a bunch of 3-4 letter words like “pie” or “cool” to bust out, but if you’re ever going to get anywhere you need stronger stuff. I was pretty pleased when I got “savory.” Then you’ll need to detect those words in a sea of letters. Being that you can go in any direction, merely looking for words isn’t enough. You’ll need to get good at working your way to vowels and back out again.

The hardest skill, though, is the tile management itself. If you’re not careful you’re going to end up with huge globs of tiles that you’ll never be able to clear. Strings of consonants or blocks of nothing but a bunch of “A’s” will leave you in a bad place. If you don’t clear tiles in a good order so they fall into something useable, it really doesn’t matter how good your words are.

Being that SpellTower is a game that lives or dies by these skills, your enjoyment of the game will largely depend on them as well. Not entirely, though. I’m pretty terrible at most of the stuff I’ve listed above, and yet I loved this game. I lay that at the feet of how utterly satisfying it is when you string a few good words together. With no crutch system in place, you know without a doubt that you’ve earned every point you got, and that’s a pretty good feeling.