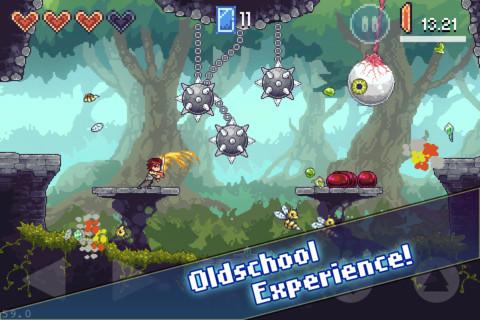 Divided into three different areas, each consisting of 20 missions, players will control a hero as he runs around collecting “spell cards” in an attempt to vanquish a seemingly endless onslaught of foes. Once collected a spell card will – you guessed it – cast a spell, as well as modify the spellsword in the player’s hands.

One spell might send fireballs careening towards to villainous horde. Another might create a gust of devastating wind with every swing of your blade. Yet another still might poison every character on screen that’s not in your control. There are plenty of spell cards to collect, and new ones are introduced slowly throughout the course of the game.

But simply collecting these spells isn’t enough – you’re going to need to level them up, too. Spending the rupees that have spilled out of your fallen foes, you’ll be able to make any spell stronger, and therefore deadlier to the opposition. Likewise you’ll be able to buy hats, rings, and amulets that will modify your spells and stats – though, like spell cards, some of these can be unlocked simply by completing missions.

Alongside the RPG elements, it’s the missions that really set this game apart from its inspiration.

While Super Crate Box is incredibly fun, there’s no denying that it’s little more than a high score chase with no real payoff other than bragging rights. Spellsword‘s missions task you to do a variety of things, which not only helps keep things fresh and players coming back for more, but forces you to think about the game in completely different ways. One mission might task you with simply surviving until the eighth wave of monsters, so you’ll wait until your favorite spell card pops up, hunker down, and use it up until the spell wears off. Another mission might demand that you collect a certain number of spell cards in a limited time, causing a frenzy of running and grabbing cards – and teaching you the value of using multiple spells at once in the process.

And that’s really the key word – “teaching.” Whether you realize it or not as you play, the missions are designed in a way that will help you develop different strategies for different scenarios. It’s the sort of game that goes out of its way to make you better at it.

That’s not to say that there’s plenty of handholding, though. Things can get pretty hairy, and sometimes seemingly impossible. For example, there’s one mission in the second world that asked me to kill 200 mushrooms – but between their poison slowing me down and the laser-shooting eyeballs dangling from the ceiling, I could never really manage to get past 70. Thankfully I can still revisit past missions to earn more rupees and beef up my spells, or even hit the “endless” mode to grind for cash and remind myself that I’m not too shabby at Spellsword in the process (even if those 200 mushrooms might think otherwise). 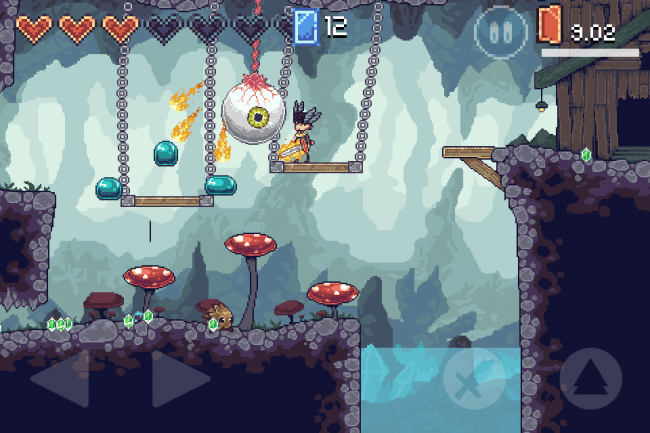 If there’s one complaint to be had, it’s in the game’s promised iCade support. Those of you that own the device already know how great Super Crate Box plays with a joystick and buttons – so you’d think giving Spellsword iCade support would be a no-brainer. Yet the iCade implementation here is a broken mess. No matter what button you press or direction you tap, the command you’ve entered seems to be stuck endlessly on repeat. Tap jump and your hero will do jump after jump with no way to stop. Make a slight tap to the right, and he’ll walk to the right until he bumps into a wall. This is something that should be an easy fix with an update, but it’s utterly bizarre to think that it launched with such a glaring problem.

On the flipside, though, touch screen controls in Spellsword couldn’t feel tighter. In fact, I felt more in control here than I ever did in Super Crate Box, so really, it’s hard to not give Spellsword an overall win in the responsiveness category.

Some might be quick to call games like Spellsword a copycat, but when a game improves on its inspiration in just about every way imaginable like Spellsword does, it’s hard to justify such labels. While Super Crate Box may have invented the formula, Spellsword elevates it to the next level. Fans of SCB, consider yourself warned – you have your new addiction.