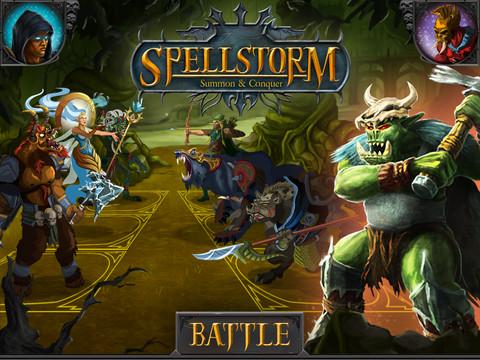 This game is so pretty it’s almost distracting.

I have to give TinyCo credit for Spellstorm; it’s an online card collecting game with enhancements, evolutions, and PvP fighting yet it feels more like an adventure game than a freemium CCG. Of course it’s still laden with freemium elements and can be a bit obtuse at times, but it’s an unexpectedly interesting game with a passable story and an extensive selection of cards. Plus it’s absolutely flippin’ gorgeous.

A young summoner finds him-or-herself caught up in a web of magical intrigue and necromantic cults. Things aren’t quite right in the realm and creatures that shouldn’t be hanging around are appearing in disturbingly large numbers. And there’s a talking book. Hey, I said the story was “passable,” not Oscar-worthy.

Players begin their journey through Spellstorm‘s world with a quick tutorial before they’re left to their own devices. A quest log offers up some guidance along the way but for the most part they’re free to progress, replay missions, build up their stable of cards, or fight other players as they see fit. Basic adventuring is broken up into multiple portions within each area that can typically be completed with minimal effort or energy. However each one also has a chance to supply four different cards, making it worthwhile to replay finished sections both for the sake of completion and to acquire more cards for enhancements. On top of that are the quests which range from defeating a specific number of players in PvP combat to collecting specific cards from specific regions, each doling out its own set of rewards.

A lot of what Spellstorm has to offer is fairly similar to other games in the genre, but it manages to keep things from feeling stale. The interesting and varied stable of creatures and abilities certainly helps, as does the addition of artifacts/weapons (these can also be enhanced) for creatures to equip, but I think it’s really the visuals that seal the deal. I’m not necessarily a huge fan of some of the character designs but this is one fantastic looking game. Not only are the visuals nice and crisp, but the animations are surprisingly fluid. Even watching the summoner toss bolts of light at random obstacles in order to farm a location for cards can be hypnotic.

Combat, both against NPCs and other players, is an entirely automatic affair. Cards are randomly pulled from the player’s deck and they simply watch the action until they or their opponent run out of health or summons. It can be pretty awesome to watch thanks to the visuals, as I’ve mentioned, and seeing skills trigger almost brings a sense of pride to the fight. However there’s also an option to skip the combat entirely and go straight to the results in case players aren’t interested in waiting. It might seem like a small thing but being able to bypass the typically lengthy battles (or even fast-forward through them) does a great job of keeping things moving. Even someone like myself who loves the visuals and animations won’t always want to watch every single fight from start to finish, so this was a very smart move.

It took me a little while to start learning more of Spellstorm‘s intricacies, mostly thanks to a tutorial that ends before dishing out enough information. New players will be taught the absolute basics from the start, but stuff like deck editing and PvP combat have been relegated to optional quests that pop up once the tutorial is finished. And I had to figure out what artifacts do, and then how to actually equip them, entirely on my own. Seriously, I had all these ice daggers and no idea how to use them, so I opened up the help menu and found out these artifacts could be equipped. Then I had to figure out how to go about doing that. Turns out there’s a small grey box in the upper-right corner of each card in the Deck menu that can be tapped to display artifacts that can be equipped. Kind of unintuitive, right? 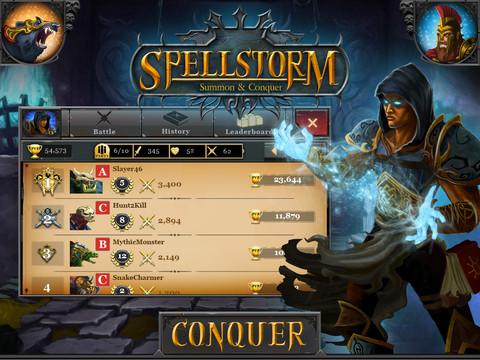 Of course, in the grand scheme of things, Spellstorm isn’t all that difficult to figure out. At least it has an in-game help menu. And besides, once all the important stuff is covered there’s plenty of enjoyment to be had through questing, fighting, and upgrading. And it’s so, so pretty.