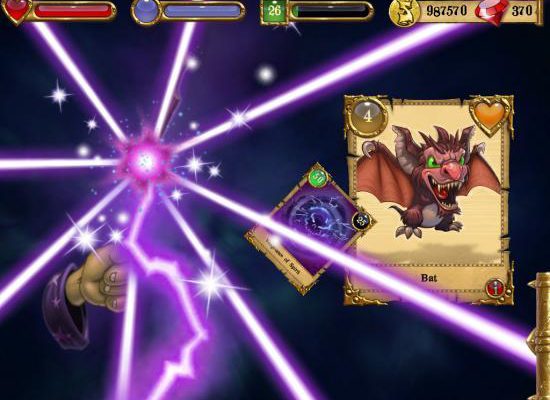 A little bit of sorcery has come to iOS today in the form of the newly released SpellCraft from Appy. A role-playing game of sorts, the title combines elements of the older, core-gaming genre with those more reminiscent to the mobile and social spaces, such as moderate “farming.” Though somewhat basic, it marks a nice change of pace from the constant deluge of simulation applications.

Players take on the role of a student at some unnamed wizarding academy. No, it’s not Hogwartz. Upon starting up the game, it is learned that all the instructors have gone missing and the school’s bestiary emptied. As such, players must venture deep into the cavernous dungeons below in search of these missing persons. In order to aide in this endeavor, card-based spells must be created and used.

There isn’t much to worry about off the bat, as players are given their first spell by default. Once in the dungeon, users tap rooms to explore and are usually greeted by a card representing a monster (sometimes cards are treasure or items). This initiates a turn-based battle with the player opting for a single type of consumable spell card to use per turn. When it is their turn to attack, a ball of energy will travel up and down a digital wand, and the idea is to tap when it is at the wand’s tip. Holding the tap will charge the spell, causing it to grow, and releasing it at the maximum growth will perform top damage.

This is pretty much the majority of the battle system, but as time goes on a bit more strategy comes into play. Elemental weaknesses are the most prevalent, which work in a rock, paper, scissors fashion (earth, fire, water, etc.), but there are also spells that have added effects such as instantly killing a specific type of creature or stunning them for an entire turn. 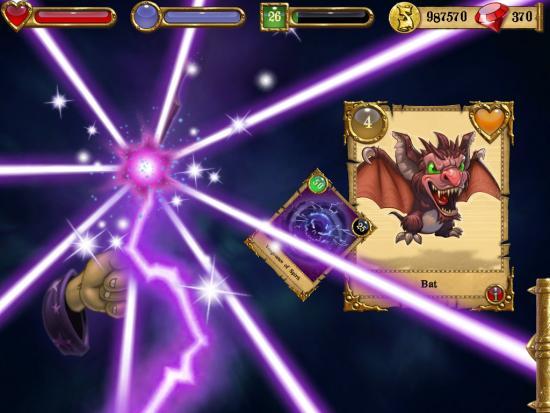 In order to garner these spells, players are capable of entering a moderate farming style of play within the academy’s Greenhouse. From here, users can unlock plots of soil and plant various flora to grow as ingredients. Expectantly, this follows the standard thread of farming-game rules: The more powerful the plant is, the longer it takes to grow. That said, it can be expedited with items such as fertilizer (which cost virtual currency).

Once the plants are fully grown, they can be harvested and used in the Spell Library to craft new spell cards. Should the ingredients be available, players can toss them into the smoking cauldron and begin mixing them. In a simple mini-game, each recipe requires users to stir, with one’s finger, the pot in a particular direction at a certain speed. Measured by an accelerometer, the better this is done, the more spell cards are created. As one ventures deeper and deeper into the dungeon below, a wide variety of spell cards is recommended.

Also adding to the RPG element of SpellCraft is the player’s Dormitory which allows them to customize both their look and equipment. Like most RPGs, these items can be bought or sometimes found in the dungeon, and augment the stats of the user. This includes things like defense, speed, and elemental resistance. None of it is terribly extravagant, but is all nice to have. 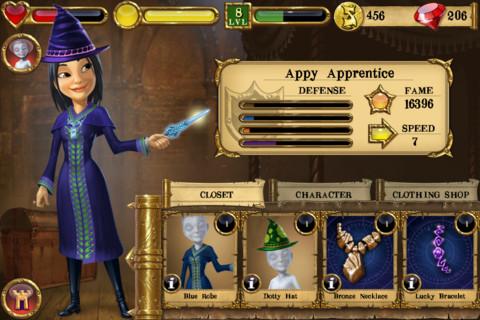 That’s really the whole story with SpellCraft. The game is good, but there is nothing tremendously wowing about it. That said, there is nothing really wrong either. It has all the components of a great game, and they are all implemented well, but it just doesn’t stand out.

The game begs for greater strategy components in the battle system, or perhaps a means to customize the stats of one’s avatar better. All in all though, the game is different than the majority of freemium releases and is still enjoyable to play, and is certainly worth checking out.