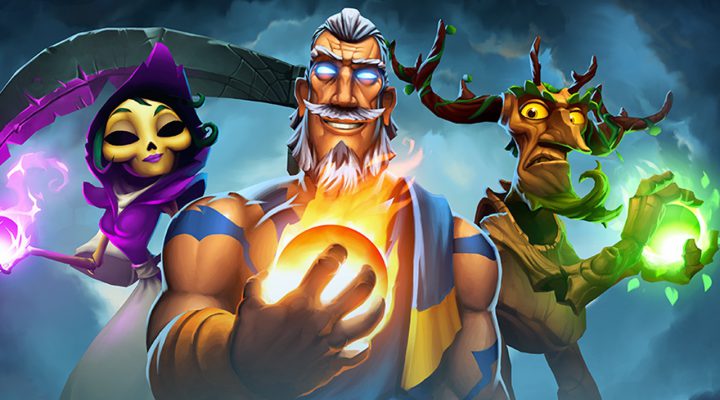 No restricting energy-based system. You can play the game as much as you desire.

Excellent tutorial gradually teaches players the concepts of the game.

Many of us (myself included) are still tapping away at Supercell’s latest release, Clash Royale. But as solid as the gameplay in the game is, now that Royale has been out for a few months, many players (again, myself included) are ready for a change of pace.

Spellbinders, from Kiloo, turns the Clash Royale experience on its side (literally) and removes the need to collect cards and manage decks. The game is, essentially, a leaner Clash Royale.

In Spellbinders, players compete as deities against other players to see who can destroy their opponent’s base first. Players have a maximum of four randomly chosen spells and units that they can put into play, so long as they have enough mana to use them. Mana slowly regenerates over time, so players must be careful with what they cast and when. 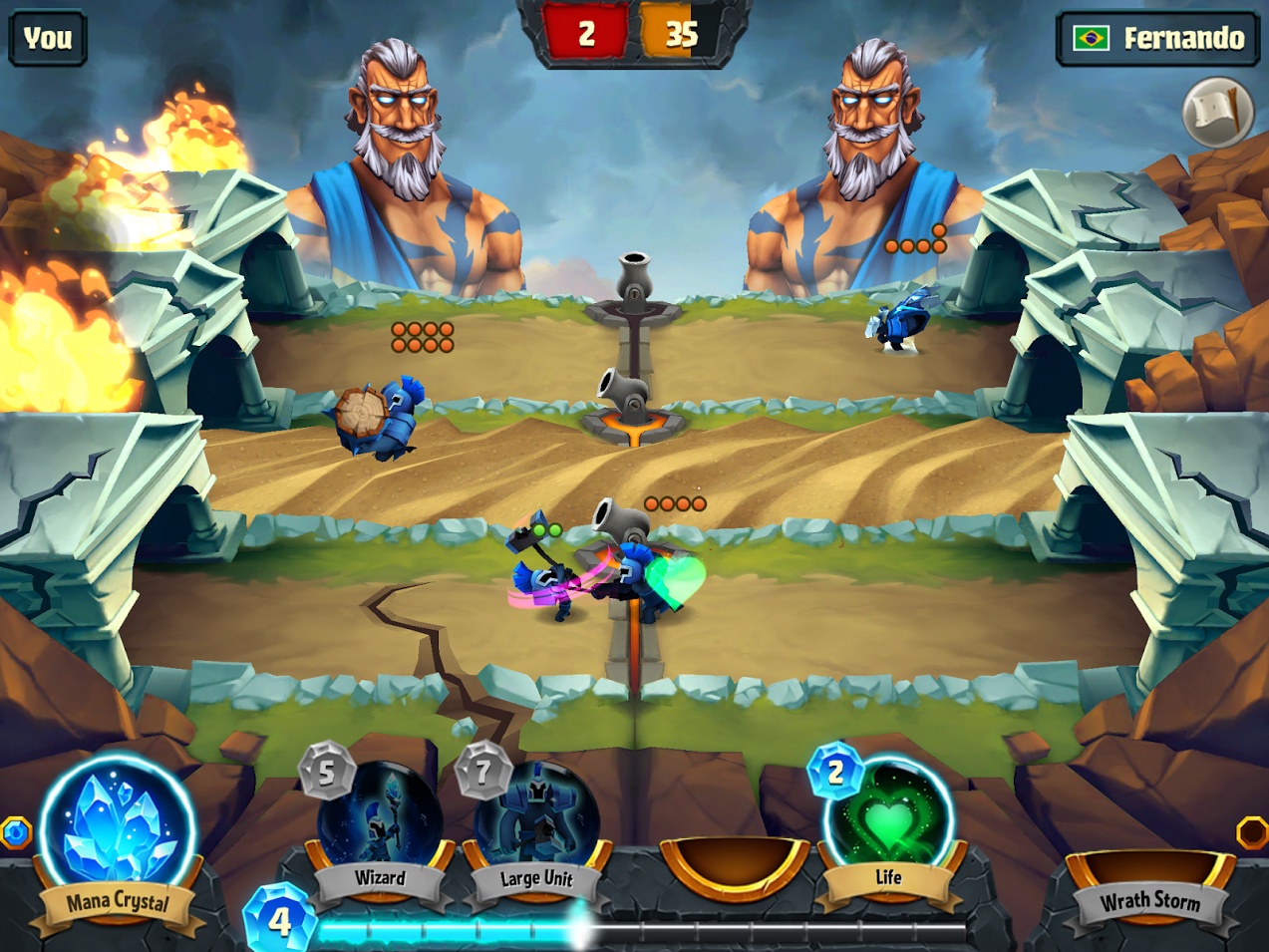 The battlefield is broken into three lanes into which players summon their units and spells. Units will charge across the lane towards the enemy base, and if uninterrupted, they will capture their lane’s central cannon before heading into the enemy base where they will explode and deal damage. The central cannons, once captured, will periodically fire at the enemy base dealing damage over time. If all three central cannons are captured they will simultaneously charge and fire one powerful shot before returning to a neutral state.

Each unit is marked by a certain number of orbs. These orbs represent that unit’s health. When two units meet on the battlefield, the unit with the most orbs will win. The orb system gives players instant feedback on how combat between units will turn out (with an exactness that a health bar could not match) allowing players to make quick, strategic decisions about when to cast spells. 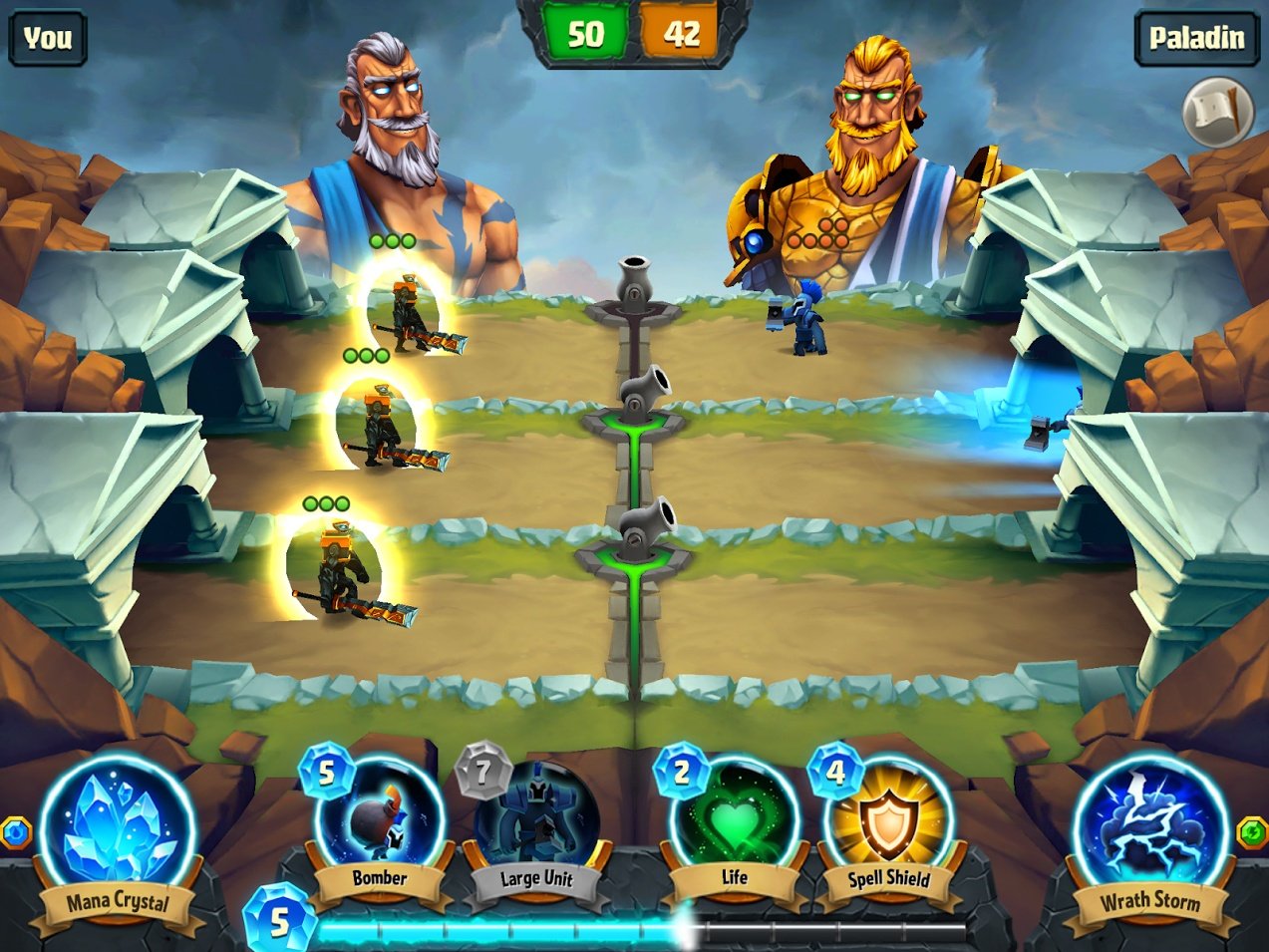 Spells vary from hard-hitting fireball spells to attack speed boosts that can double friendly unit’s attack speed; with one such spell (named Rage) a unit with two orbs can take out one with four, for example. In short, all of the spells have various strategic uses, and I enjoyed experimenting with combining the spells with individual units’ functions.

Before you’re tinkering with advanced strategic combinations, you must first learn the basics. Spellbinders does a great job teaching players how to play the game. There are a dozen single-player levels that players must beat before they can get into the multiplayer mode. For each level a new spell is introduced, easing players into being able to effectively wield all of the game’s spells. Being able to understand the various uses of the units and spells is integral, as players have no choice in what is given to them during battle, and must make due with what the game provides. 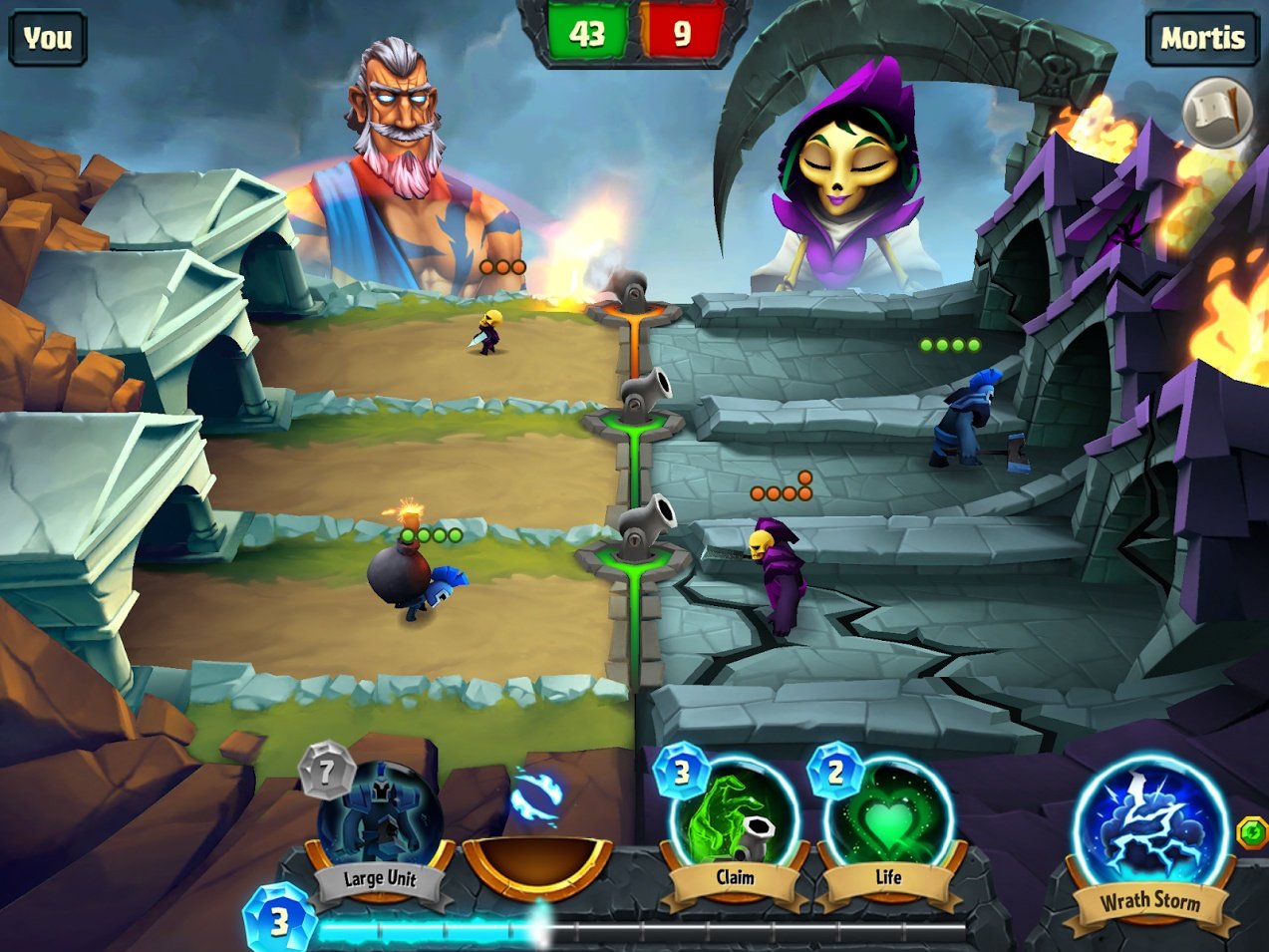 Victory awards players with a bit of gold, which is used to boost a few stats, and runes, which are used to unlock different deities (each deity has a few different units and spells unique to them) and alternate skins for those deities. Because there is no energy system limiting players to X-amount of battles per time period, players can play Spellbinders for as long as they wish. While you can pay for gold, players who opt to not pay for anything aren’t at a significant disadvantage. Oddly enough, the different cosmetic skins for the gods are unavailable for direct purchase at this time, and instead must be earned through victories, via earning runes.

As much as I’m enjoying Spellbinders, a few technical issues are hampering the experience. Spellbinders periodically crashed while I was playing on my iPad Mini 2. Online battles were sometimes affected by connectivity issues that would stall the battle while the game strained to reconnect me to my opponent.  After a few battles involving network-related issues, I played around in Clash Royale and Hearthstone wherein I had no connection issues on the same device using the same network. For Spellbinders to see any truly long-term stickiness, Kiloo will need to iron out issues like this in future game updates.

Spellbinders isn’t the most innovative game, but it’s still a fun one. The quick rounds, endless play time, and the on-your-feet strategic gameplay make Spellbinders hard to put down. The colorful visuals and excellent character animations add a charm that helped me overlook the game’s technical stumbles. If you’re a fan of the strategy offered by Clash Royale and on the hunt for something a little different, Spellbinders is an easy recommendation to make.