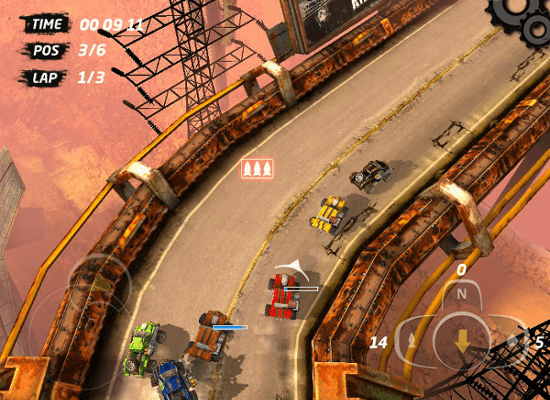 You have to admire a game that starts out with such a bizarre line as “Welcome to the friendly world of DEATH RACING.” At the very least it’s worth your attention, and I myself went into Speed Kills expecting more laughs and a racer that doesn’t take itself too seriously; where warrior maidens cheer me on for being such a good sport as they poke my car full of rocket holes. I could have loved such a game. Alas, Speed Kills takes its gritty setting seriously after all, and while I enjoyed its races and wide variety of tracks, a sprinkling of questionable design decisions and controls left my enjoyment somewhat in the dust.

Still, it’s nice to see another good death racing title for mobile devices, particularly for those of us who played genre classics such as DeathTrack Racing and Wipeout XL years ago. Speed Kills takes place in one of those strange visions of the future where society has at once evolved and devolved, zipping about planetary systems with an ease unheard of today but also engaging in deadly racing tournaments reminiscent of the races of ancient Rome. It’s most vividly realized in the settings, with racetracks that look as though they were pulled from Mad Max‘s concept art, but it also makes itself known in the hosts that taunt you before and after a round. One, sporting green dreadlocks and pierced eyebrows, looks as though she was modeled on Jack from Mass Effect 2, and the others exude a similar aura of insolent punkiness.

That attitude carries over well into the actual gameplay, which generally consists of isometric racing across 50 tracks spiced up with an option to deck out your car’s number of weapons for both frontal and rear assaults. The variety is extensive enough to keep the racing combat interesting, and the addition of other power-ups strewn about the shop ensure that you’re not completely underpowered if you jump into a race without loading your vehicle with ammo at the beginning of the round. In theory, such a wide range should allow for fast-paced matches in which different contestants engage in a tug of war for positions. 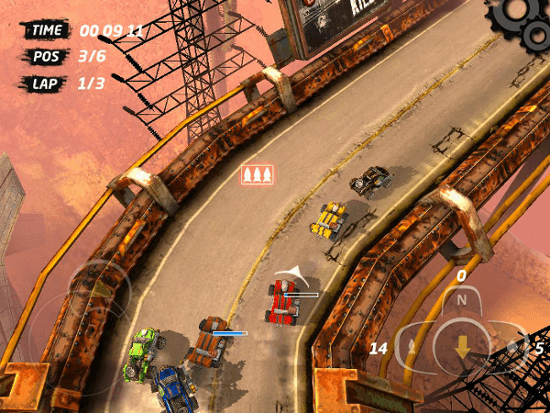 In practice, you’ll have a good idea of the outcome of most races in the first few seconds. There’s a reason why portals and other devices are so common in games like this these days; if you get behind, either because of a blast from a rocket or because your car went careening off the edge in a badly timed jump, you can give up almost all hope of ever catching up. It doesn’t help that cars often respawn in silly spots such as by the jumps that killed you in the first place, leaving you to relive your failure once again while your NPC opponents speed past.

Speed Kills features responsive controls that mitigate the slight pain of these moments, but maintaining consistent control of the vehicle can be a chore. Keep in mind that this is more a problem of the genre than of Speed Kills itself. Even though I quickly mastered the art of accelerating and turning by running my thumb over the virtual joystick in the lower left-hand corner, I found that my thumb almost always slipped off the grid after about 30 seconds of continuous gameplay. A quick readjustment fixes the problem, of course, but the resulting deceleration is usually enough to let another car take the lead. It’s not as much of a problem on the larger screen of the iPad, but on the tinier iPhone, it makes the game all but unplayable. Good thing, then, that iPhone optimization is reportedly on the way. 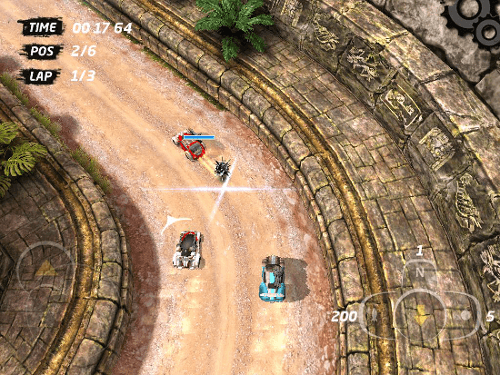 Somehow, in spite of these issues, Speed Kills manages to be fun, and it provides a decent amount of content for free (including a car you can fully upgrade) before you need to start plunking out cash for the worlds and tournaments designed for advanced players. Impressive customization options for your eight vehicles enhance the experience further still, as do the memorable futuristic visuals. As it is, though, it’s a good game that hasn’t quite crossed the line to great, and you’ll want to be sure you’re familiar with its quirks before you drop money in it.