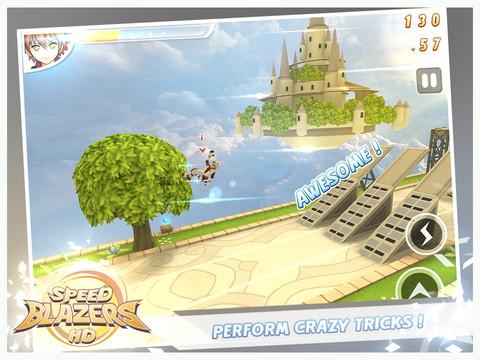 Speed Blazers isn’t bad, but it’s not quite the crazy experience we were hoping for

Within a few minutes of playing Speed Blazers, it’s obvious that the developer Fraktalvoid made a mistake that’s all too common within the game industry: It created a trailer that was a lot better than the game itself. That’s a shame, because this new racing platformer isn’t bad by any stretch of the imagination, but it’s not nearly as polished as the movie would’ve had us believe.

The game takes place in a world where racing isn’t done with cars or motorcycles; instead, racers are outfitted with “Sonic Particle Blades” that allow them to glide along the ground at incredible speeds and perform insane aerial stunts. What’s the background of the Speed Blazer races? No idea. Why, exactly, do characters look like someone with an anime fetish designed them? That’s never explained, either. When you’ve got a crazy setting that contains no background information, it feels like someone squandered a great opportunity.

But enough about the disappointing storyline: Let’s move onto the oft-frustrating gameplay. Each race takes place on a three-lane track that’s littered with obstacles, hazards, ramps, and speed boosts. The goal here isn’t just to come in first place; there are all sorts of collectibles scattered across your lane. This gives you a lot of motivation to replay to replay levels, since it’s nearly impossible to collect all the items and come in first place in the same race.

The main problem here is that the mechanics don’t always work like they should. While you’re in the air, the game doesn’t always seem to detect the swipes that trigger a stunt. Additionally, if you mess up and trigger a stunt too late, you’ll wipe out on the track and have to start off at the last check point you passed. And since these are few and far between, you can go from first to last place in an instant. The other problem with the game’s controls is that the virtual joystick will randomly stop registering your touch, so it’s not uncommon for your character to halt mid-race until you change your thumb’s position.

You can occasionally switch lanes during races, courtesy of grinding rails and loops. This is kind of a nifty mechanic because it means that you might wind up sharing a lane with another character, and you can knock them down if you time your stunts right. Unfortunately, there’s no way to switch lanes of your own accord. That’s too bad, because if you could actually do this at will, the gameplay would be a lot more dynamic and it’d be a lot of fun to battle your fellow racers.

The final problem with the mechanics is that you can occasionally get stuck on an object. Case in point: It’s entirely possible that you’ll get stuck on a loop and have to restart the race because you can’t free yourself.

There are a total of four playable characters, each of whom you unlock when you gain access to their sets of levels. While they’re certainly fun to look at, there’s no difference with how they play. Fraktalvoid is obviously planning to add more characters, considering out there are four more empty character slots right now, but whether or not they’ll add anything more than visual trim remains to be seen. 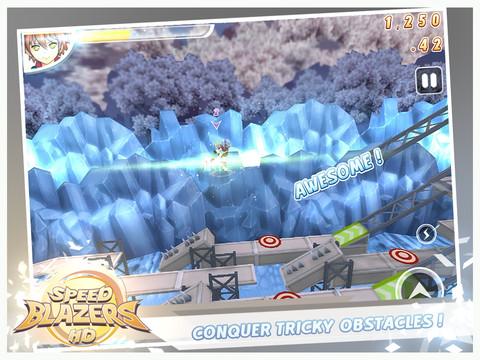 The one thing that’s a resounding success across the board is Speed Blazers’ production values. This is a great-looking game, no doubt about it. It’s even better-looking on the iPad, since the HD graphics allow you to take in even more details than you can see on the iPhone’s display. The environments are fun and colorful, and the character designs look magnificent (doubly so if you happen to be an anime fan).

Beneath the issues, Speed Blazers has the fundamentals of a great game in place. As it stands, though, this is a title that feels like it’s still in beta, thanks to the bugs and the obviously incomplete content. If you feel like you just have to play a new racing game, you could certainly do a lot worse, but you might want to wait for an update or two before you pick this up.