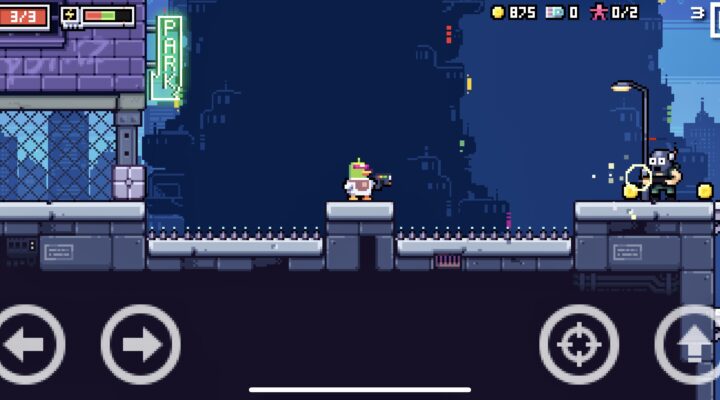 Plenty of upgrades and new characters

Can be TOO challenging

Could do with a checkpoint system

There are loads of retro-style action platformers on mobile nowadays. Some to them are great, some of them are terrible, and somewhere exist in that middle zone between the two. Special Agent CyberDuck certainly fits into that last category.

The game sees you playing as a cybernetically augmented duck. You’ve got a gun, you can double jump, and there’s a psychotic AI trying to take over all the crime syndicates in the city. You’re the only one that can stop it.

Cue lots of jumping, blasting and generally trying to get from A to B without dying. There are coins to collect as well, and you can spend these on increasing the power of your arsenal and unlocking new characters to help you out.

Things start off pretty smoothly, but a couple of levels in the difficulty spikes. This is a challenging game, which a lot of people are going to love, but it misses a few beats in getting there. And there’s a distinct lack of a checkpoint system that makes things even tougher.

Once you die you’re dumped back at the start of the level. Sure, you’ve got the coins you’ve collected, which makes unlocking the new goodies that much simpler, but when you’ve almost reached the end and have to batter your way through every section again it can become pretty tedious.

There’s a lot to see and do in Special Agent Cyber Duck and if you’re up for a challenge you’re likely going to find enough fun mixed in the frustration to push on. But if you’re looking for an action blaster that plays by modern rules, you’re better off exploring elsewhere.