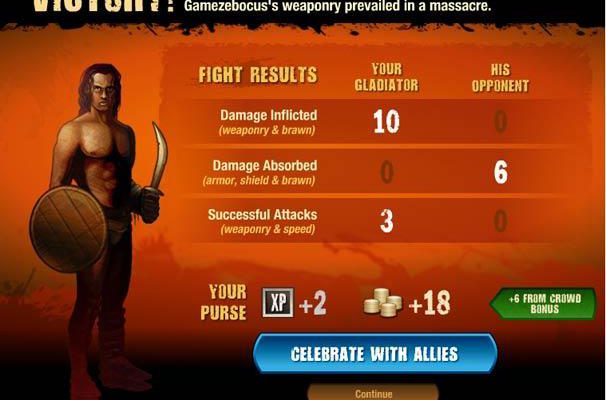 Spartacus: Gods of the Arena is a virtual fighter with the guts to kill.

Spartacus: Gods of the Arena is the latest attempt by a major television studio to make a successful Facebook tie-in game, and predictably this virtual fighter largely follows the safe formula laid down by previous titles of the same ilk. You buy equipment, you level with every fight, and you take part in largely automated battles that hide most of the actual fighting. The good news, however, is that the Gods of the Arena have enough small tricks up their bloodied sleeves to warrant attention.

Your journey to gladiatorial greatness starts at your ludus, or training school, where you train your fighters for their upcoming matches. Unlike in other fighting games, you’re not limited to one fighter; instead, you can raise a small army of customizable gladiators with varying strengths in speed, brawn or vitality. You can increase these stats by training your gladiators or by buying weapons and armor from the shop, although these items quickly grow expensive. Since even the smallest upgrade will cost a small fortune if you’re not careful, you’ll want to save the best upgrades for your best fighters. 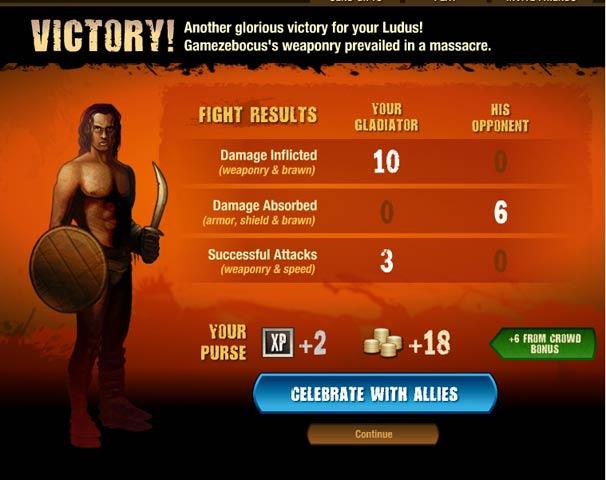 Here’s why. As in real gladiatorial matches, your fighter can die if he loses and the crowd gives him the dreaded thumbs down. You can sometimes convince the crowd to spare his life, but if he’s gone, he’s gone. This means that any gold you spend on your gladiator is irrevocably lost if he loses, and that you’ll need to start afresh with one of your other fighters. Thankfully, combat isn’t entirely left to chance, although the actual fighting is limited to an animated sequence that’s completely out of your control. The object here instead centers on cheering when your opponent does something awesome (e.g.,”Gladiator lands an attack”) and jeering when your opponent blocks a blow or lands a hit on you. This, of course, becomes much easier depending on your stats and the strength of your opponent and, should you wish, you can use Facebook credits to rig the fight. 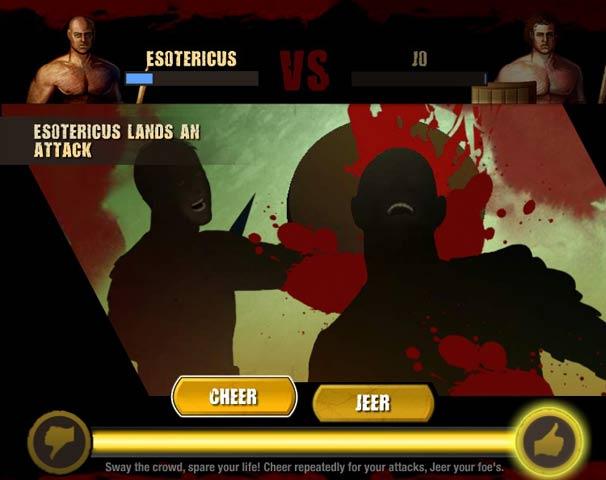 It’s a welcome spin on a familiar approach, but it’s not without its problems. Not only does the fighting animation start to get old after only a match or two, but it moves so quickly that it’s possible to accidentally cheer when your rival slams his sword in your face and jeer when you block a strike. Even so, Spartacus offers a better experience than most fighting games on Facebook, and the constant threat of losing a fighter gives the game a necessary edge. Even the social aspects are decent: You can sell your gladiators to your friends, you can ask your friends to heal wounded gladiators (i.e., the ones who lost but were given a “thumbs up” by the crowd), and you have access to more training sessions based on the number of friends you have. 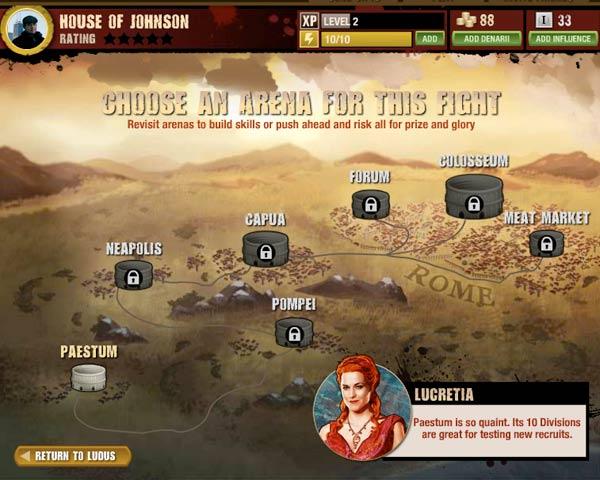 Color me surprised. Large Animal Games, Starz and 6 Waves have accomplished a rare spin-off success story here, and I hope the game only gets better with time. If the game has any one strong caveat, it’s that parents may want to familiarize themselves with the fairly graphic animations in the battle sequences before letting their kids play. All in all, however, Spartacus: Gods of the Arena proves how far a developer can go with a very simple concept without sacrificing many claims to fun or originality. Thumbs up.