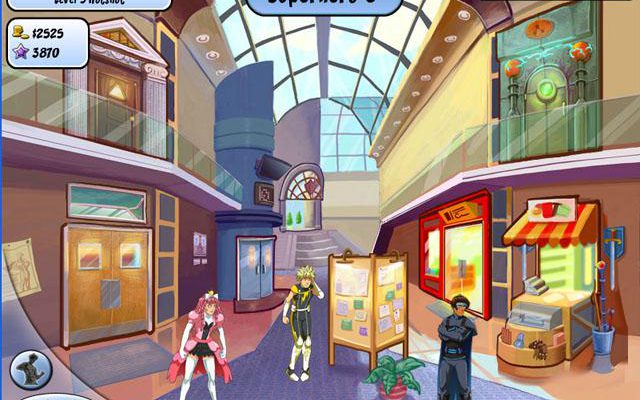 Spandex Force: Superhero U is a take on the curious match-3 RPG format that Puzzle Quest pioneered. The swords and sorcery are nixed in favor of superhero trappings, this time focusing on a school that trains photogenic teenagers up into the next wave of heroes.

The match-3 gameplay is fairly pedestrian, but the story mode is still lots of fun owing to some funny gags and in-jokes that’ll bring a smile to a comics fan’s face. You create a male or female hero at game start, name him or her, customize his or her costume colors, and get started. 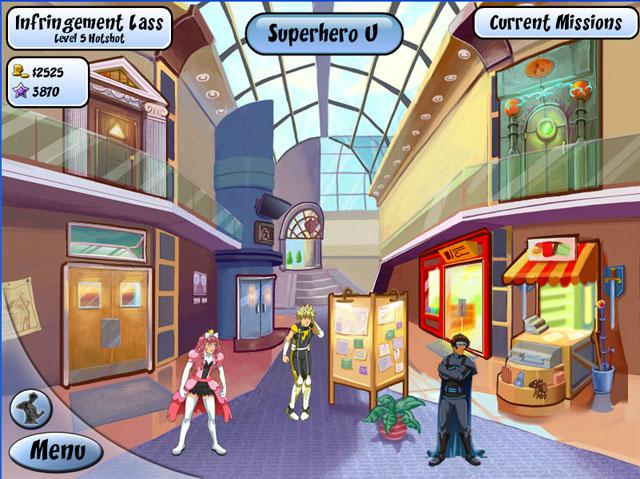 Superhero U is broken into chapters that correspond roughly to your school career. As each new semester starts you select three classes (from a set of five) to take. Each class requires you to overcome slightly different challenges to complete it and offers slightly different stat rewards. You can choose to heavily customize your character to favor physical, elemental, or mental attacks, but a balanced approach that includes all three also seems to work well. As you level up you gain skill points to spend on your basic stats. You can also spend money you earn while playing the match-3 part of the game on upgrades for your superpowers or equipment that modifies your stats a bit, too.

The match-3 gameplay incorporates all of the major styles: row-sliding, reversi tile-swapping, and the Bejeweled Twist-style four-tile rotation. Different challenges use different styles of play, while others may switch between them to keep a player on his or her toes. Each game board is comprised of money, experience, physical, mental, and elemental tiles. Some challenges also mix in special tiles, like karma tiles or absurdium tiles, that you need to gather as part of clearing the mission.

The story aspect of Superhero U is genuinely inspired, letting you meet demented NPCs like Princess Pain and go on quests that riff rather cleverly on the genre’s most blatant clichés. The gameplay is a mixed bag. The missions you get begin to rapidly feel very repetitive, since the game doesn’t feature a lot of the character-vs-character puzzle battling that defined Puzzle Quest. Instead, most of the time, you’re trying to gather energy or resources within a time limit. Most of these missions feel exactly the same, which leads to trying to rush through the puzzles as quick as possible to reach the battle or story sequences. 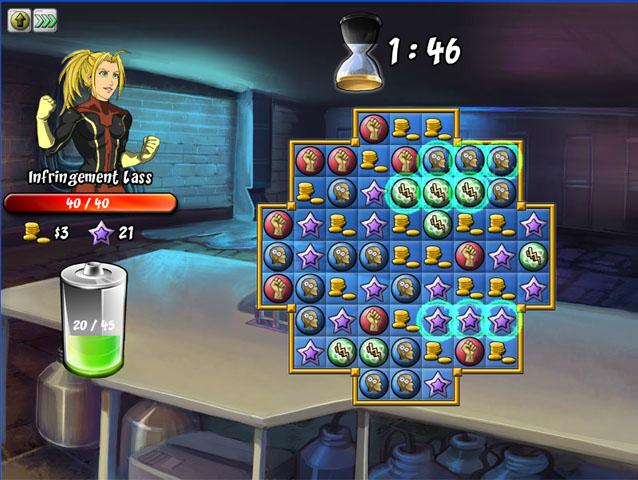 Fans of both comic books and match-3 puzzle games will probably find Spandex Force: Superhero U quite enjoyable. More general fans of match-3 puzzle games and puzzle RPGs may not find it entirely satisfactory, however. While RPGs by their nature are a somewhat repetitive genre, Superhero U gets so repetitive that it honestly feels a bit padded-out at points. There’s fun to be had with Spandex Force: Superhero U, the question is if the game’s formula will wear out its welcome too soon.