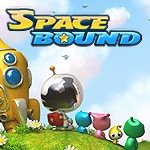 If it were Captain James T. Kirk at the helm of the Picolyte spacecraft, none of this would have happened.

Except it was the bumbling Captain Bloom, who was busy reading a magazine instead of steering the ship, that caused their UFO to smack into our planet’s satellites and send little Picolyte creatures falling haplessly to Earth.

And so these colorful little aliens ran rampant through 10 of our world’s biggest cities – such as Paris, New York, Beijing, Moscow and London – and were caught by evil scientists and spoiled girls who wanted a new plaything.

As the remorseful Captain Bloom, your goal is to rescue trapped Picolytes from each city. Because these tiny critters contain energy, collecting them also powers your spaceship so it could fly to the next location.

Cute premise indeed, but Spacebound can be a challenging puzzler.

Players see a grid of square-shaped Picolyes, who may be yellow, blue, red or green. The goal is to rotate a block of four squares so that a minimum of four same-colored Picolyes are touching. This causes them to break free and enter your spaceship. Rotating the blocks clockwise is performed by clicking the left-mouse button, while spinning them around counter-clockwise is achieved by right-mouse clicking.

After a match is made, a countdown begins – this is your chance to create as many combos as you can within these few seconds as you’ll achieve a greater number of points. You can create combos in one of two ways: by adding more squares onto your original block or by creating additional blocks of four or more same-colored squares elsewhere on the grid. Because you’re under the gun to create combos before the countdown timer gets to zero, Spacebound adds a wonderful layer of tension as you race to rack up as many points as possible. This combo vs. timer element is innovative and well-placed within the game mechanic.

Things get more complicated over time, however, as some blocks are blank (so they cannot be used to create your group of four same-colored blocks); some have padlocks on them, which means they cannot be rotated; and some have bombs on a timer that need to be part of your combo within a certain number of moves in order to diffuse it. If a bomb explodes, you lose some precious fuel.

Spacebound also lets you collect postcards from each city, which shows off the beautiful rendered retro art used to create the characters and background images. You can also collect special achievement badges to show off to fellow players.

Even though this 50-level Story Mode has enough game-play to last you a long while, Spacebound also houses two additional game modes: Puzzle Mode is devoted to diffusing those bombs with two-dozen unique and challenging levels, while the Endless Mode offers a never-ending game of Picolyte rotating without worrying about progressing through a story.

Though Spacebound is a great game, it is not impossible to put down. After awhile, the game play can become a bit monotonous; it would have been nice to have seen more game play elements (more power ups, more Picolytes) introduced in later levels. Also, some players may want a more relaxing “casual” game experience instead of being forced to create combos under a strict time limit.

Nonetheless, Spacebound is definitely worth the free download so you can get to know this challenging and attractive game. And who knows, you may just fall in love with these little Picolytes after all.