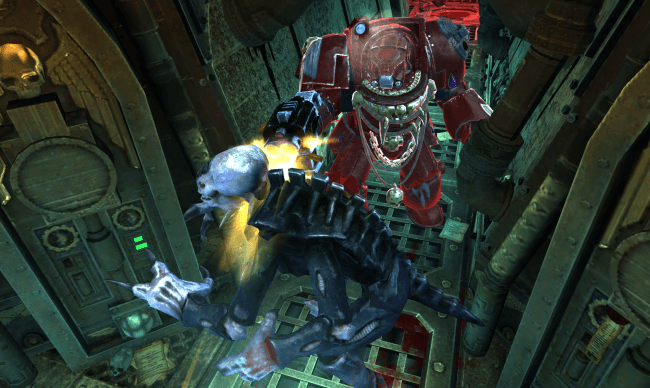 Sci-fi tactical combat affair Space Hulk is widely acclaimed as one of the most atmospheric board games ever made. It’s also commonly recognized as begging for the video game treatment, and yet in the 25 years since its release, all we had were some live-action titles and fan homages. The latest developer to tackle the licence is Full Control, and after a buggy PC release, the game has come to mobile.

The action is set amongst the tight corridors and tiny rooms of a derelict spacecraft, where heavily armed Space Marines square off against limitless hordes of slavering alien horrors called Genestealers.  There’s a series of missions with varied objectives like retrieving data collection devices or burning strategically important terrain points. 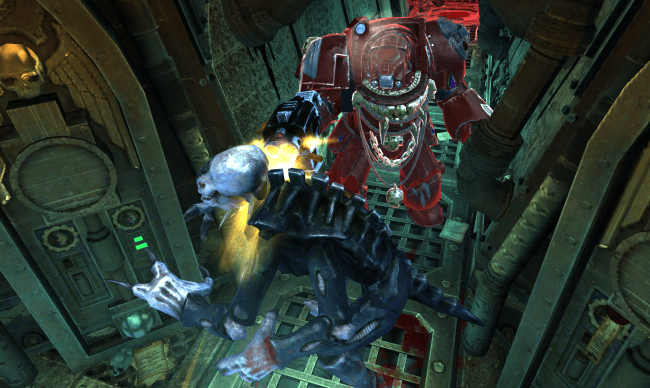 Mechanically, it’s mostly classic turn-by-turn, action point based tactics: nothing inspirational there. But there are two features that catapult the game into classic status.

Second is the twisty, claustrophobic nature of the maps. Rather than the open worlds smattered with scenery typical of the genre, Space Hulk takes place in spidery networks of tiny rooms interconnected with one-space wide corridors, dismal with choke points and ambush sites.

These features make the game into the dense, fraught experience that it is. And the graphics and sound in this adaptation add tremendously to the excitement. The rules and art are based on the richly produced third edition of the board game, and are resplendent in detail. There are brutal kill animations if you want them and, in a great touch, a little window above the tactical map shows you the viewpoint of each marine.

I love how the sound mostly consists of deathly silence, making the punctuations of pounding gunfire, hissing doors, and growling aliens all the more effective. Mission briefs are delivered in the sort of robotic monotone you’d expect of a futuristic warrior in power armour, and similar intonations pepper the play. 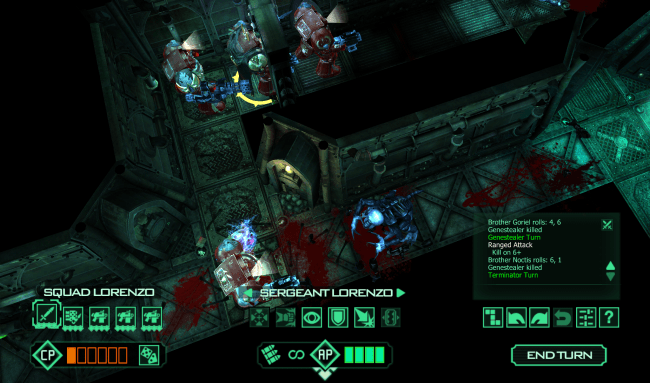 Strategically it’s a great mixture of pre-planning, on the hoof adjustments, and raw, dice-powered chaos. In the solo campaign each mission presents a new map and objective, and you’ll learn to scan the corridors, looking for points to set marines into overwatch, allowing them to fire during the enemy turn and protect their comrades moving deeper into the hulk. A wide roster of armaments, including melee weapons and brutal heavy guns, adds to the variables to consider.

It’s not a complex game, and the interactive tutorial levels will teach you the basics in no time. However, there’s a glaring omission: you’re never told that Marines can move and shoot at the same time. It’s implemented in the game, thankfully, as it’s an essential tactic in several missions. But given its importance it should have been highlighted for new players.

In hotseat or asynchronous play, one player controls the Genestealers. They’re fun to play, but are tactically much simpler than the Marines. So you’d have hoped the developer could have done a little better with the AI. It’s not awful, but does silly things like launching Genestealers into the line of sight without hope of closing for a melee attack, and rarely masses troops for ambushes like it should. 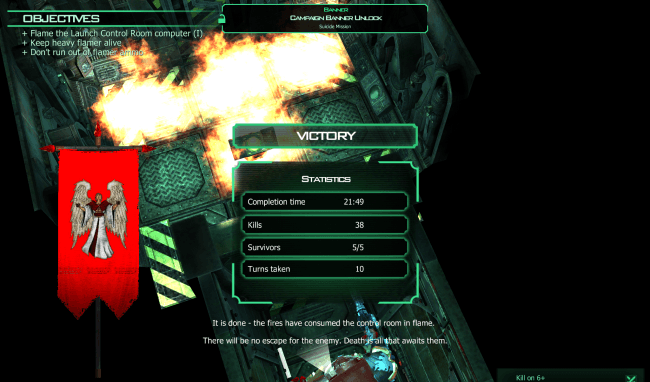 The PC game that preceded this mobile version was peppered with bugs, most of which I understand are now patched. And this is a pretty stable release. I had some minor issues with save games, and iPad 2 owners have reported crashes, but it generally functions smoothly.

Sadly, there’s ample evidence that this was a rushed port. The interface is clearly mouse-centric, requiring you to tap buttons to turn the view rather than the usual grab and twist. There’s even reference to WASD keys in the instructions. Oddest of all there’s a long pause at the end of every AI turn where nothing seems to happen.

It’s a shame, really, because with a proper interface a board game should work as well if not better on a mobile device than on a PC. And if they’d taken more care over the port, then Space Hulk would have been one the finest board game adaptations to grace the iPad: tense, demanding, and frequently thrilling. As it is, we’ll just have to hope for updates, and settle for it being very good indeed in the meantime.