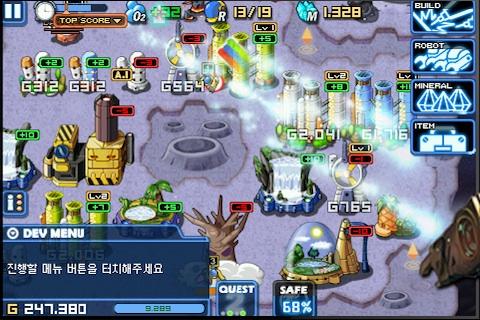 Space Frontier puts you in charge of a settlement… in space!

Space exploration appeals to the human soul. There is something about the frontier nature of the cosmos that speaks to all of us. In Space Frontier, you’ll be an architect of space colonization, building housing and air supply in the distant expanses of the universe. Temper your expectations that this will be SimCity in space; instead, you’ll be given menial quests in place of a larger, more expansive game. But while this is disappointing, what is on offer in Space Frontier isn’t completely without value.

The crux of Space Frontier is this: As a new recruit designer of space colonies, it is your task to set up numerous settlements and keep them safe from the dangers of space debris. For example, early on in the game much of the questing is tutorial-based, getting you familiarized with the different options that you have at your disposal in terms of farming minerals to build new houses, creating higher oxygen levels, and so on. The tutorial does a great job of getting you up to speed with the interface and it was very intuitive when the quests got more complex to navigate the menu quickly and efficiently to complete your tasks.

There are number of things during quests that you will want to keep track of. First and foremost are the obvious ones—oxygen levels (especially when quests call for specific levels of oxygen), gold, and minerals. Minerals are the currency that allows you to build new housing developments that bring in additional gold, as well as being used to upgrade the housing developments to produce more gold per second and “terraform” them into oxygen producing stations. You can then use gold to purchase more minerals when you run low, as well as use gold to purchase “safety” percentage points. As time moves, the likelihood that your station is hit with space debris increases. As I found out to my chagrin, if you wait too long to address this, a meteor could strike your settlement and wipe out much of your work on quests.

Each of the quests that you are sent on have top-scores that you can attempt to beat, which are solely based on the amount of time that you have to expend to meet all the task requirements. Early on, these are quite easy to hit, but like most games, will get progressively harder as the game moves along. 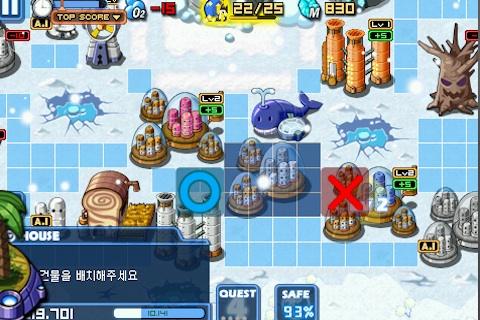 There is a story in the game, but it is unlikely to keep you interested for very long, unless you’re extremely into the over-dramatization that seeps through every pore of anime. You’ll have your cheery assistant that is super-psyched when you pass a mission, and of course, your arch-nemesis that is dark, arrogant and a major jerk. Thankfully, the art-style in between these story updates is much more reserved and enjoyable.

The biggest complaint I can level against Space Frontier is more about what it’s not rather than what it is. It would have been much more enjoyable if I was playing “Space City”, where I was building up and eventually managing a thriving space metropolis. However, for what Space Frontier is; a quest-based game with some elements of city-building, it is not a half bad way to spend a couple of hours.