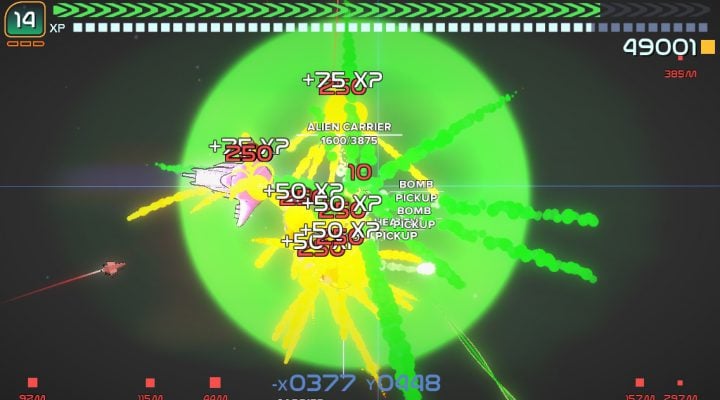 Frantic and fun gameplay with tons of stuff to shoot and explode.

Stages are vast and open, allowing for different strategies and exploration.

Strictly premium game with upgrades earned only by in-game effort, no IAPs.

Lots of repetition with little variety between stages, enemies, or missions.

Late-game play is slowed down by imbalance between level and EXP earned.

Too minimalist at times: would like to see numerical values for ship's HP and EXP needed.

Space Colors is a multidirectional shooter that pits players against swarms of asteroids and alien ships in the expansive, deadly reaches of space. Although its basic gameplay is reminiscent of the classic Asteroids, and its colorful strings of explosions recall Geometry Wars, this single-tap shooter opens up its game board beyond a tightly bordered arena.

This allows players a chance to explore freely in any direction, seeking out dangers or safe havens, doubling back when necessary, taking on enemies in full force or leading individual ships astray to be picked off one-by-one. It also creates a sense of space: while not limitless (there are borders at the 525 coordinates of each axis), traveling the open galaxy and running into nothing but stars for a few thrusts makes Space Colors feel immense, and makes running into enemies in the great vast nothingness even more intimidating. 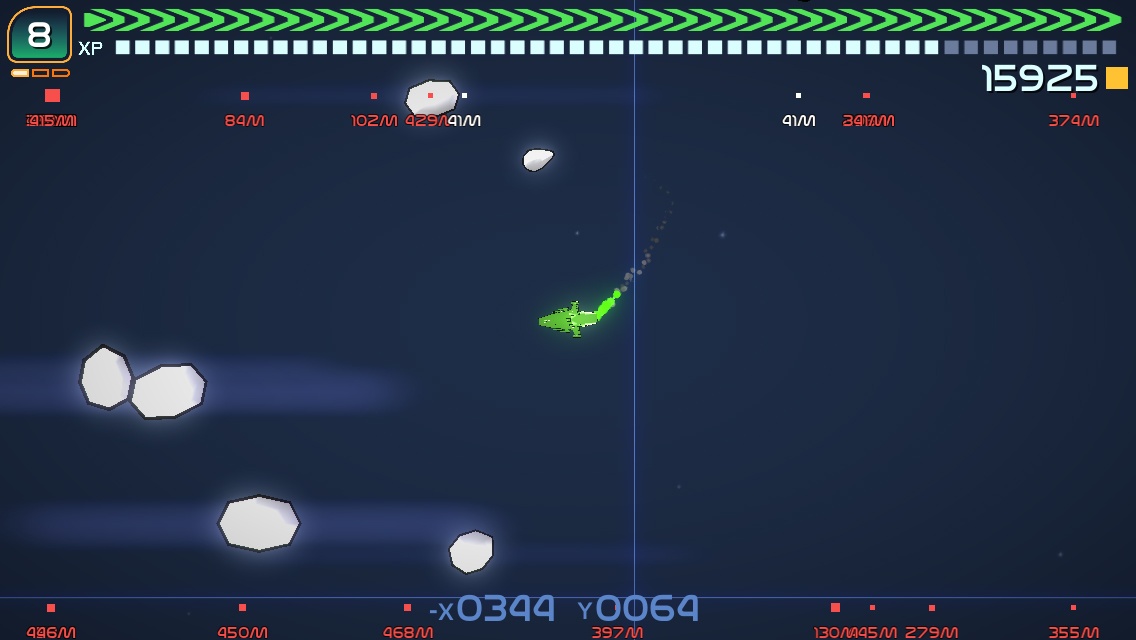 Taking on those enemies is your primary objective, although progression is measured via procedurally generated levels assigned individual missions. The overworld map is made up of unconquered planets; upon entering a planet, you’ll be given one of the mission types to complete. These include destroying a number of enemy ships, collecting a specified amount of credits, traveling to a designated location, etc. Completing the mission claims the planet and returns you to the map, from which you can tackle the next world and assignment.

This progression is essentially endless, with a seemingly limitless number of planets to conquer—on our best run we claimed 80 planets, with plenty left to tackle. A playthrough ends only when your ship is destroyed, and you lose everything you’ve earned in roguelike fashion. Your score is recorded based on how many planets, credits, and levels you gained, and you start over with only the credits and any permanent upgrades made to your ship. This persistent upgrade system means that enhancements—like a stronger ship, more health, or a better gun—are notably expensive, but they provide an attainable goal besides simply “beat your best score.”

With this focus on long term scoring and without any sort of plot or characters, Space Colors is a straight up arcade bonanza. Blowing up asteroids and alien ships is substantial and satisfying, creating colorful explosions that at times fill the entire screen. The intentionally floaty controls take some practice to get used to, but are effective once mastered. Battles against even one ship can be frantic and death-defying, and you’ll often find yourself fending off a dozen or more laser-spewing enemies that will chase you across the galaxy before they’d admit defeat. And with every ship destroyed and level gained, both you and your opponents grow stronger and deadlier, explosions larger, and battles more frenetic.

All of this makes Space Colors a joy to play, but only to a point. Eventually, repetitiveness takes over, and every level and mission feels the same as the last. There are only two factions of enemies to contend with—the slower, weaker red aliens and the stronger, more aggressive purple ones—each with five types of ships to take down. You’ll encounter all of these within the first few levels of a playthrough, and then nothing new is introduced. The same is true for missions themselves: while there is great variety between the “destroy X enemies” missions and “travel to Y destination,” these are two of only four different mission types that will be repeated indefinitely. 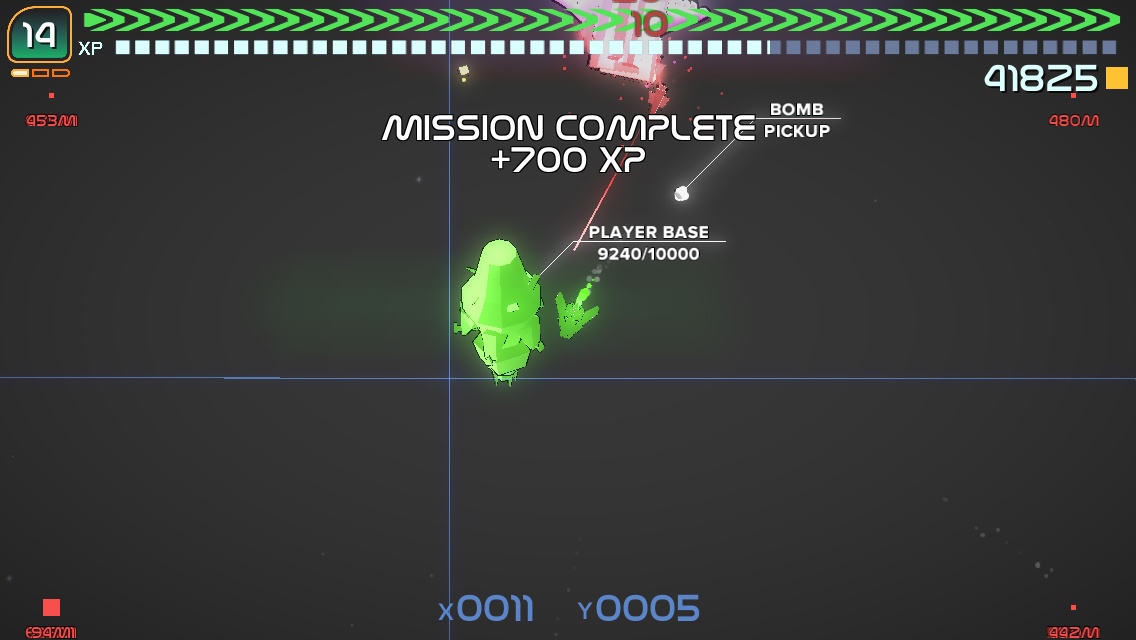 It also doesn’t help that the “planets” (levels) you enter are all identical, except for a slightly varied background color—each one is simply an empty expanse of space dotted with asteroids and enemies. There is no planetary debris or constructions to encounter. You’ll always start with the same green base ship, surrounded by asteroids, with enemy units farther out. Even the music for each level is identical: albeit frantic and fitting, even a few different scores would be a welcome change of pace.

The result is a game that starts off dynamic and thrilling, but falls into a slow grind of sameness. The fast-paced stages also slow down once you reach higher levels and have to take on enemies with thousands of hit points. Leveling up beyond level 10 is a monotonous slog of lengthy battles that seem unbalanced for late-game play: despite the fact that you’re encouraged to survive as long as possible for a high score, there’s no gameplay benefit to doing so. Later stages can take half an hour or longer to complete because of this slowdown, and there’s not even a pause button to provide momentary relief. 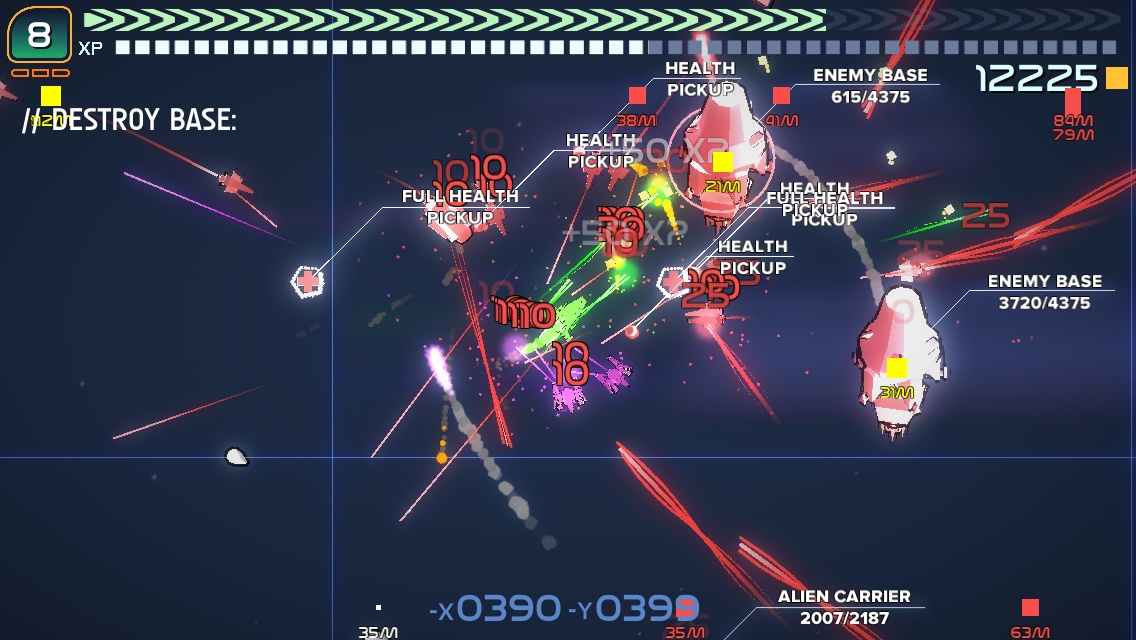 With some balance tweaks—stronger enemies rewarding more experience, levels providing more variation—Space Colors could maintain its excitement from stage one to stage one hundred. As it currently stands, it’s a hectic joy-fueled rush at first that trails off after the first dozen or so stages. It’s best experienced in short bursts of explosive, colorful mayhem: burn bright and fast.