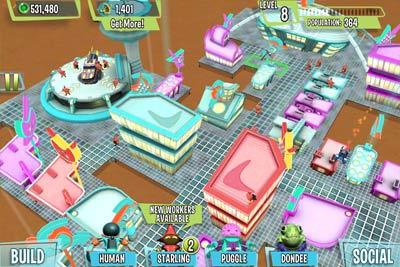 Space City is an intergalactic trip worth taking

While some may see Space City as just another social game, its unique space theme complete with race diversity is a nice diversion from the norm. In Space City, you are given the task of running a planet in the far reaches of the universe. Not only have humans discovered this far off planet, but other alien races have as well. Yes, you will have to share this planet with Starlings, Puggles and Dondees: the three alien races.

Beyond simply cosmetic, these races are distinct in Space City because of the way the game’s buildings function alongside them. You will have to build separate buildings for each one of the races instead of simply one standard type of building. Puggles will not sleep in human houses, Starlings won’t hang out in Dondee bars and so on.

Having said that, I do have some concerns about how this will equal out when space becomes scarce in the game. Currently, there appears to be no way to expand your planet, so having to build completely separate buildings for different races could become a rather large problem in the future.

In the buildings that would logically have employees such as restaurants, shops etc., you will have to hire citizens to work there. Depending on the race, the workers could have different boosts in the shop. Puggles, for instance, will speed up the collection time a bit so you can receive the necessary credits quicker than usual.

Don’t get me wrong; at its core Space City is little more than your average city-building social game. However, the unique space theme and visible polish give it the edge over most others. Without it, Space City would just get lost in the fold along with all the other cookie cutter social games that seemed to get pumped out every week.

Graphically, Space City is fairly charming with its “Space-Age” 1960s motif. Classic diners and slanted houses line the streets to top it off. 3D graphics are a nice touch as well, primarily in a genre where they are not often attempted. The music is distinctly spacey, resembling a classic sci-fi film. 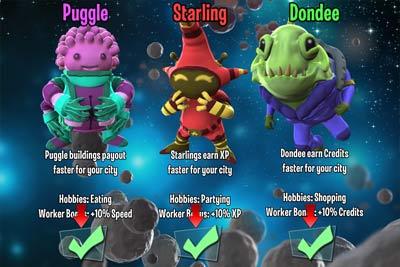 Where Space City really lacks is in social features. Yes, you can connect to your Facebook and Game Center to pull in your friends, but you can’t really do anything with them. The only advantage to visiting your friends’ cities is to see what theirs looks like and to receive a small daily bonus. For an otherwise polished and fleshed out social game, it’s a bit disappointing to see it lacking severely in this area.

At the end of the day, Space City is a nice diversion in the lacking social genre on iOS. While most games are simply content with being simple, Space City is at least polished and mostly focused. Having a space-age themed city wasn’t necessarily on my agenda before playing the game, but now I’m on board with the idea. Recommending Space City is easy, if only for its fresh take on social.

Tales of Lagoona: Orphans of the Ocean Review