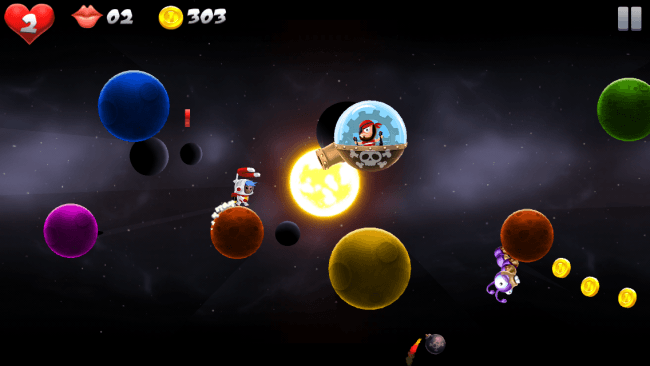 Are you a bad enough dude to rescue girls in space?

Let’s get this out of the way right up front: Space Chicks is the next Jetpack Joyride. It’s the next ‘endless play, buy new upgrades, can’t put it down’ addiction that fits snuggly in your pocket. You’re going to play it, love it, and curse this review for ever letting you know about it in the first place. It’s a game that accomplishes exactly what it sets out to do – make you want to keep playing round after round.

Space Chicks is an endless runner with a gravity-based twist. Like Canabalt, Jetpack Joyride, and the like, your little astronaut will run automatically, with jumps performed by a simple tap anywhere on the screen. What makes Space Chicks unique, though, is where your hero jumps to.

In a move that seems to draw inspiration from physics-based games like Angry Birds Space, your astronaut will jump from planetoid to planetoid with each jump’s trajectory affected by the pull of gravity. The object of the game is to successfully time your jumps to get from one planet to the next in a quest to rescue the titular chicks in space.

Once you find one of these stranded ladies, they’ll stick by your side until you return them to their rocket ships (which will appear on another planetoid shortly after each girl’s rescue). If you should bump into an enemy, though, your chick will let go and need to be re-rescued from that spot.

Space Chicks offers a good variety of enemies and obstacles – not just in their appearance, but also in their behavior. Space pirates will chase you from planet to planet or sit in a bomb-firing ship trying to pick you off. Little green monsters will stay in one place waiting for you to step over them, while big purple monsters will circumnavigate their tiny globes. With a heaping helping of challenges like these bunched together at every turn, there’s plenty to keep you on your toes. And with upgrades and items to unlock with earned in-game currency, there’s always a fresh carrot at the end of that stick.

The game’s presentation is as satisfying as the gameplay, with a colorful design scheme that pops and a perky soundtrack you’ll be humming for days. The only thing that might put some of the potential audience off is the name. ‘Space Chicks‘ sounds like some sort of hedonistic sci-fi chauvinism gone wrong – yet this game couldn’t be further from the images its title conjures. It’s cute, colorful, and friendly; and it would be a shame if someone missed out on all the fun just because of this.

The game offers a fantastically fun local co-op mode as well, though I suppose the amount of fun you’ll have is largely dependent on the person you’re playing with. My gaming partner (I won’t say who, but I’ll give you a hint: I married her) was terrible at Space Chicks for the first few rounds, but that somehow made the experience better.

The controls for playing on the same device are simple: one player taps the left side of the screen, one player taps the right. But no matter how simple the controls, my Player 2 couldn’t quite manage to get her timing right. She spent the better part of a minute trying to jump from that first set of planets to the rocket ship. Much laughter ensued (from both of us), which I suppose is exactly the kind of fun you want when sharing a game like this. 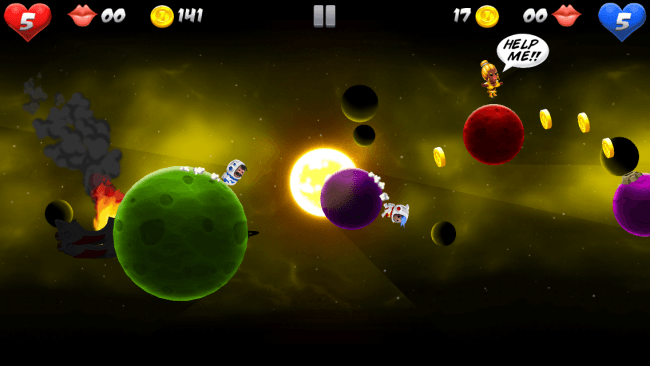 Space Chicks is the rare kind of mobile game that gets everything right. It’s simple one-button controls offer instant pick-up-and-play action, it’s gravity-based play is easy to understand but challenging to master, and plenty of obstacles are tossed your way to forever keep you one your toes (which are resting snuggly in your space boots). But most importantly, it’s fun. Tremendously good fun.

Space Chicks is in no way endorsed by Canadian astronaut Chris Hadfield, but now that he’s retired, it should be. Be sure to tweet him at @Cmdr_Hadfield and tell him I told you so.