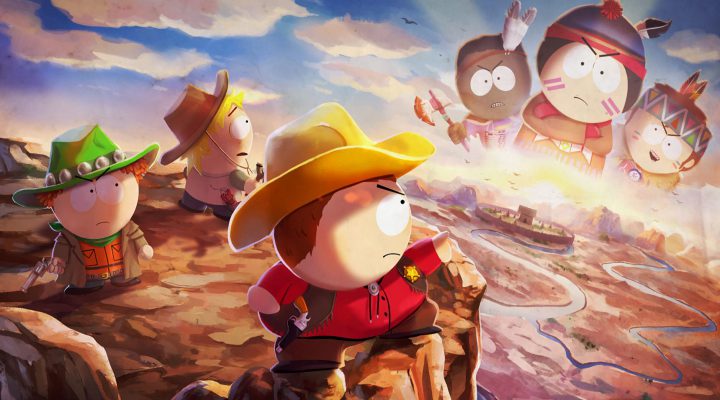 Definitely a grind or pay proposition

Expectations are funny things. For instance, if you’re told about a mobile game that apes much of the gameplay of Clash Royale, your first reaction is likely to be, “Another one?” But then if the follow-up is that the game in question is a new South Park title, you’d probably sing a different tune knowing you can expect lots of humor and some meta-commentary as well. South Park: Phone Destroyer is that game, and it mostly earns that benefit of the doubt.

Ubisoft and South Park Digital Studios don’t waste the rather lengthy tutorial to Phone Destroyer, using it to set up the framework for the whole thing in very humorous fashion. The kids of South Park have gotten together to play Cowboys and Indians (after some, ahem, urging, by Cartman), and Stan’s team looks unbeatable. In desperation, Cartman turns to a kid he says is better on his phone than anyone alive: you. Yes, you’re the “New Kid” in South Park.

As New Kid, you learn quickly how to put the beatdown on anyone “Stan of Many Moons” throws at you. The solo campaign stages are classic card-based strategy, but turned horizontally and married with side-scroller aspects. In other words, you’ve got to battle your way to the end of the stage to see who Stan summons, defeating numerous other characters along the way. If you’re a South Park fan, you’ll appreciate all the other familiar faces who show up, and the developers went way above and beyond with narrative flourishes, as Cartman “FaceTimes” you to talk, the kids participate in a faux group phone chat, and much more. 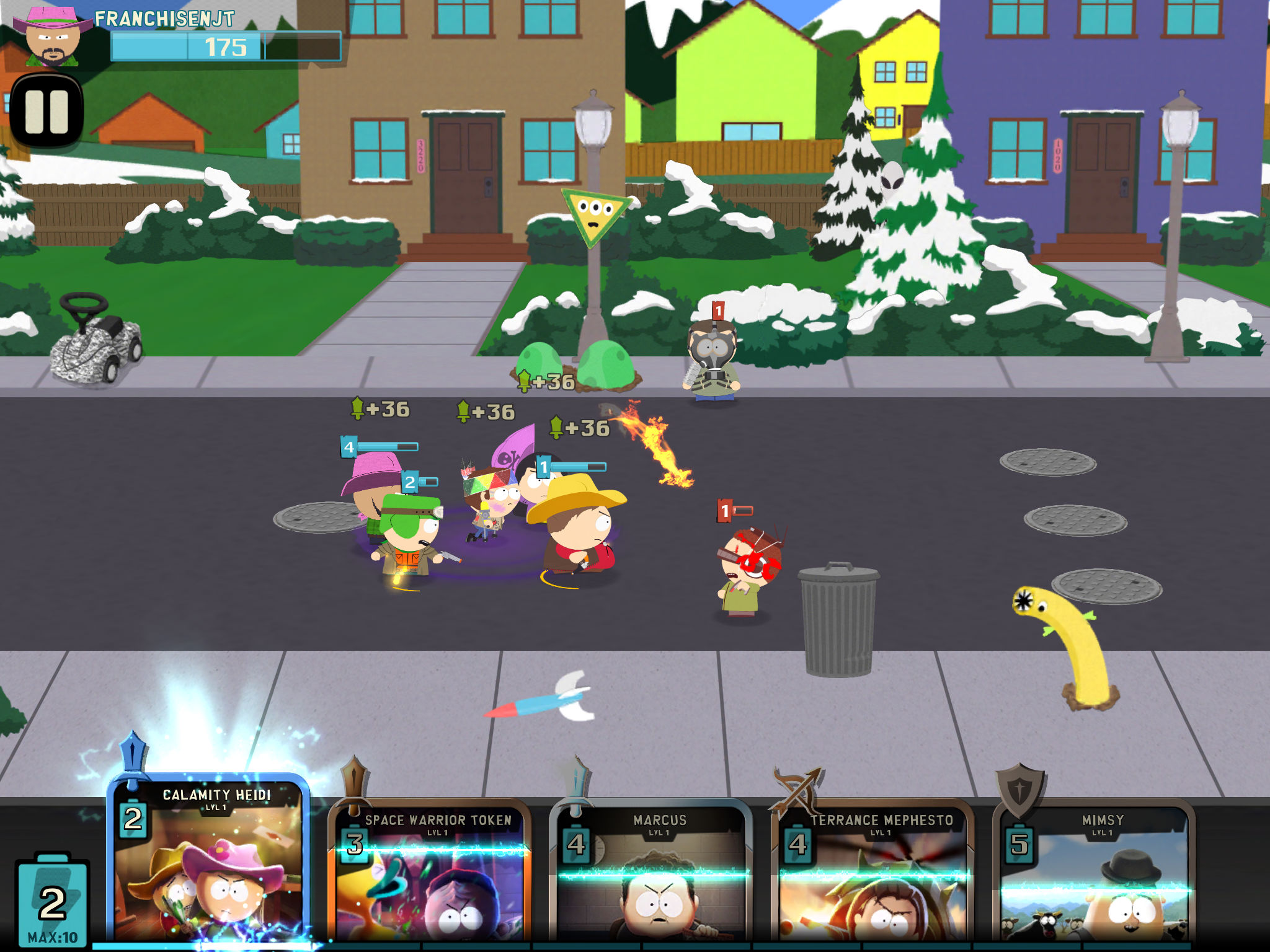 Live PvP is also a big part of Phone Destroyer, which literally stops you at certain points and makes you play more multiplayer before burning through all of the solo campaign. These bouts are simply straight-on slugfests, and thus even a bit simpler than games like Clash Royale in terms of strategic considerations. Still, they’re fun and frantic, and playing multiplayer is probably the best way to earn more cards and items with which to level them up.

In fact despite some winking humor about the nature of free-to-play mobile games in general, the worst part of Phone Destroyer is how much it seems to revel in some of the very things it mocks. While there are other card themes beyond Cowboys and Indians, it takes a long time playing through the solo stages and/or a lot of PvP to unlock them. Then you’ve got to either play back through the solo stages on harder difficulty settings or play even more multiplayer matches to get the items that make your cards better, and then on top of that, there’s still a loot chest/random element to the whole thing.

Only you can’t help but smile because instead of chests, you’re opening lockers, some of them with Lourde posters or “Token’s Life Matters” signs on them. If you appreciate the brand of humor that has kept the TV show going for more than 20 seasons, chances are you’re going to love the way it’s applied here and some of these negatives won’t bother you at all. It’s definitely not all-ages appropriate — there is some mild cursing and the violence that plays out during battles can be over the top — but it’s hard not to imagine that if you’re a fan of the brand, this game won’t continuously bring a smile to your face. 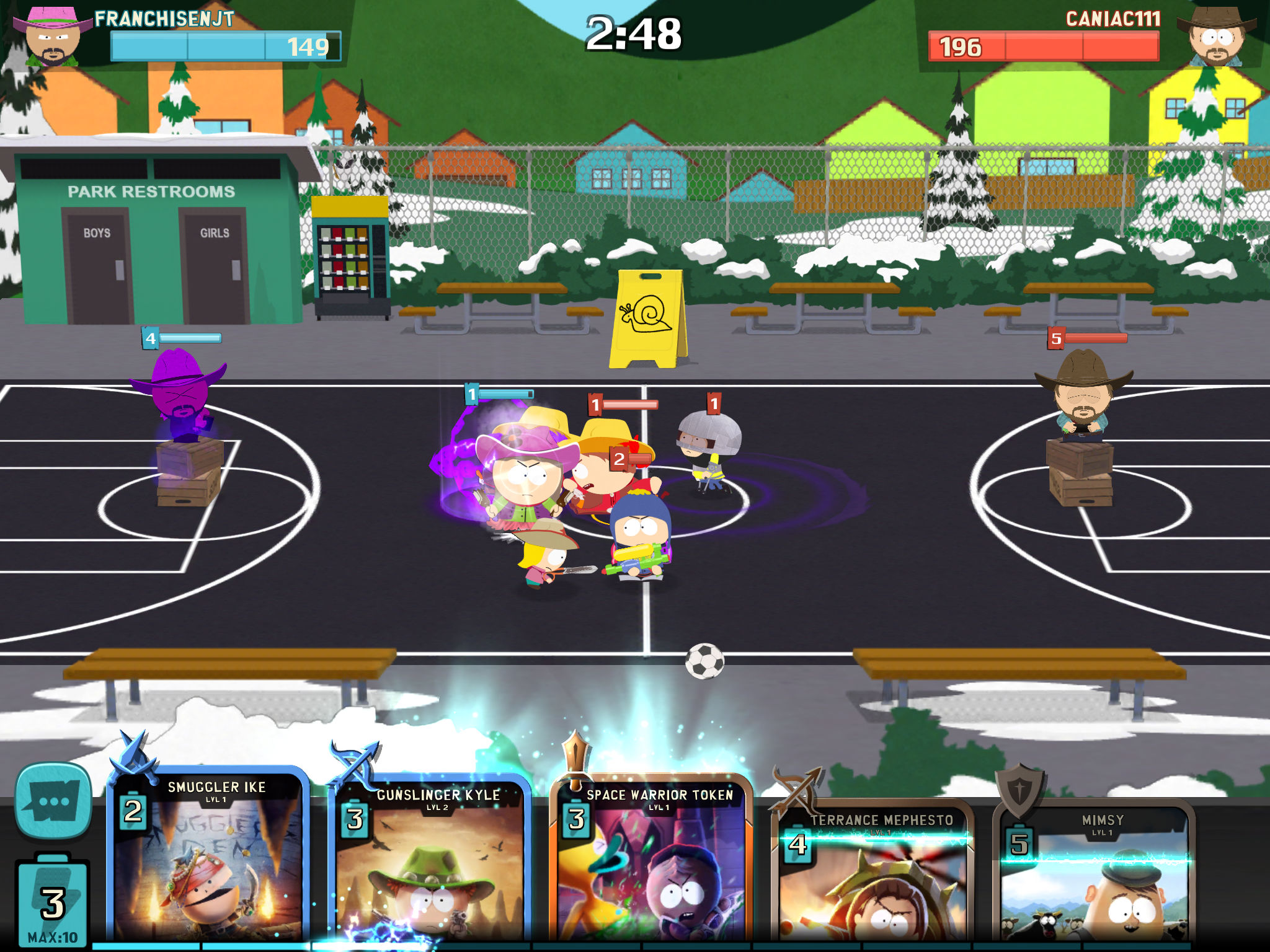 That goes for lapsed fans, too. I’m not sure what it says about me as a person, but hearing Ike say “I’ll cut you!” and “Don’t kick the pirate” when throwing him into the fray makes me chuckle. A lot. Phone Destroyer is simply so well-made that it makes you forget or overlook some of its pay-to-win DNA, and that’s no easy feat. Viva la New Kid.