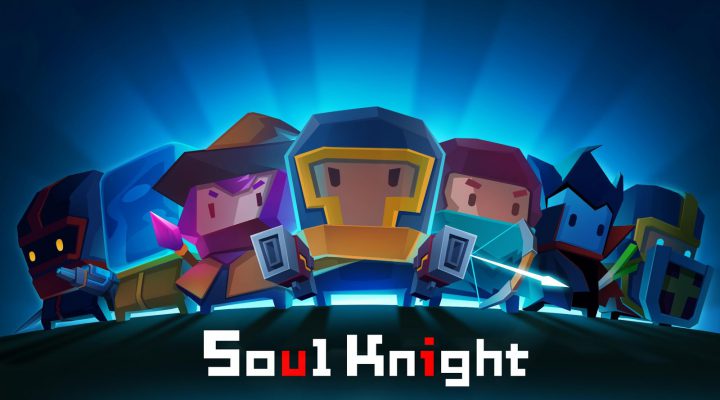 Unusual weapons test the limits of your skills.

There's a blowgun but no pea shooter?

Tutorial could be a little more detailed (ex. destroy the crystal to get a reward).

When Soul Knight by Zeyang Li and Chilly Room was released on Android and iOS last month, it almost slipped under our radar — but this beautiful little arcade-style quasi-rougelike shooter deserves your full attention. There’s very little in the way of narrative depth and backstory at play here – get some stones, defeat some bad guys – and it’s a good thing. It’s all about the action, and there’s lots of it with every corner turned. Unlike a lot of games in the growing roguelike category, Soul Knight’s simple arcade gameplay will appeal to those who might never play another dungeon crawler or an RPG in their lives. 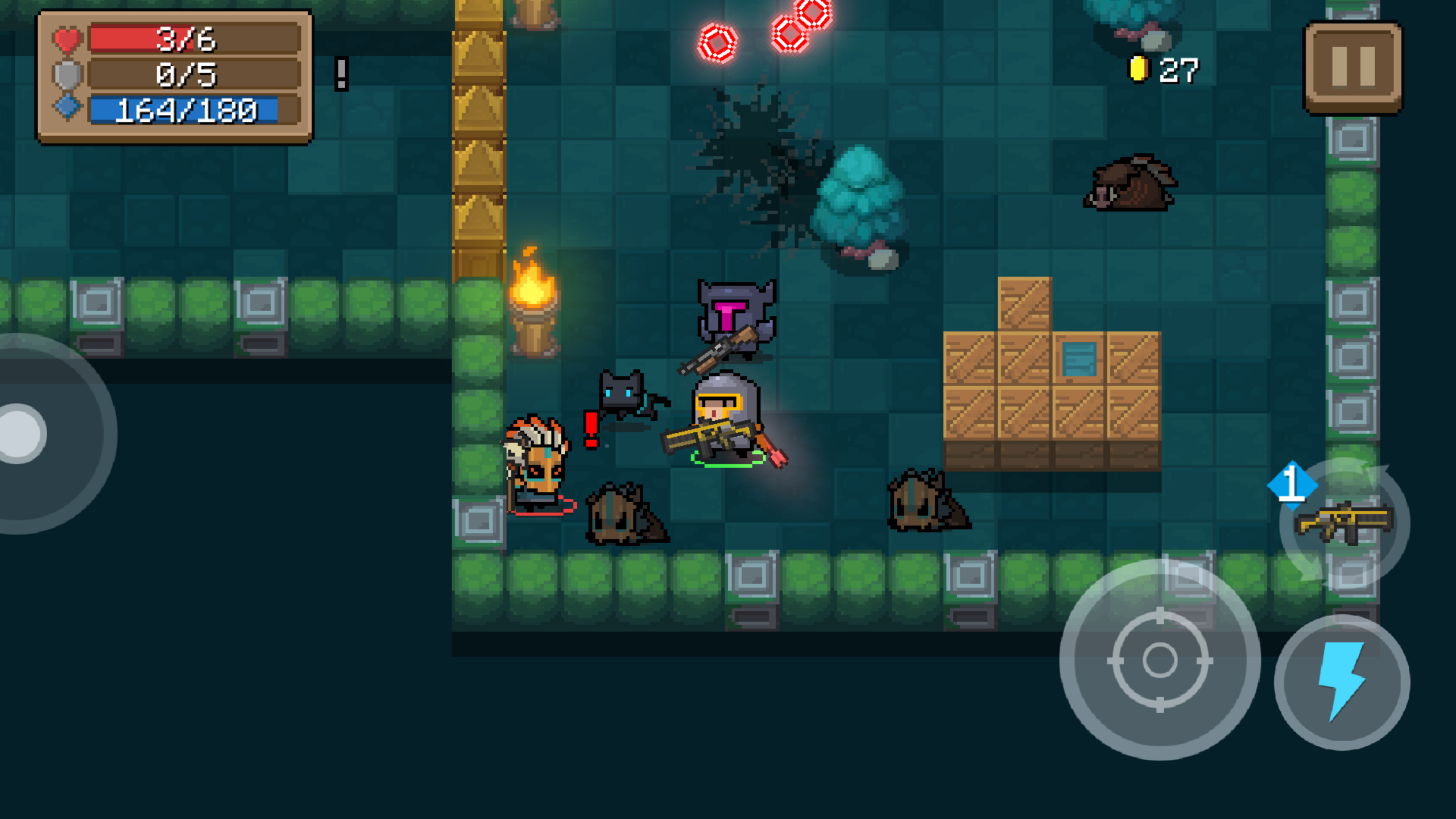 In Soul Knight, you’re given a pistol with unlimited ammo and set loose in a dungeon. Crawl through room by room defeating all the enemies the room will throw at you until you’ve finally cleared it. Success doesn’t always come easy. You aren’t going to run out of bullets, but neither will your enemies. Some beasts will try to chow down, but it’s the enemies with pistols and spray guns you’ll have to watch out for. Duck, dodge, run around like a chicken with your head cut off – whatever it takes to keep yourself alive. Health points are easier lost than gained, especially once you hit the big boss.

The graphics are solid – two-dimensional with an authentic retro arcade feel. There’s a reason those of us who grew up in the nineties remember the SNES so fondly – for some game types (and this is one of them) nothing compares. Keeping it simple here is what keeps it fun. Run and shoot. Shoot and run. No getting distracted by the graphics, in-game music or anything else. Pure action. Pure fun. 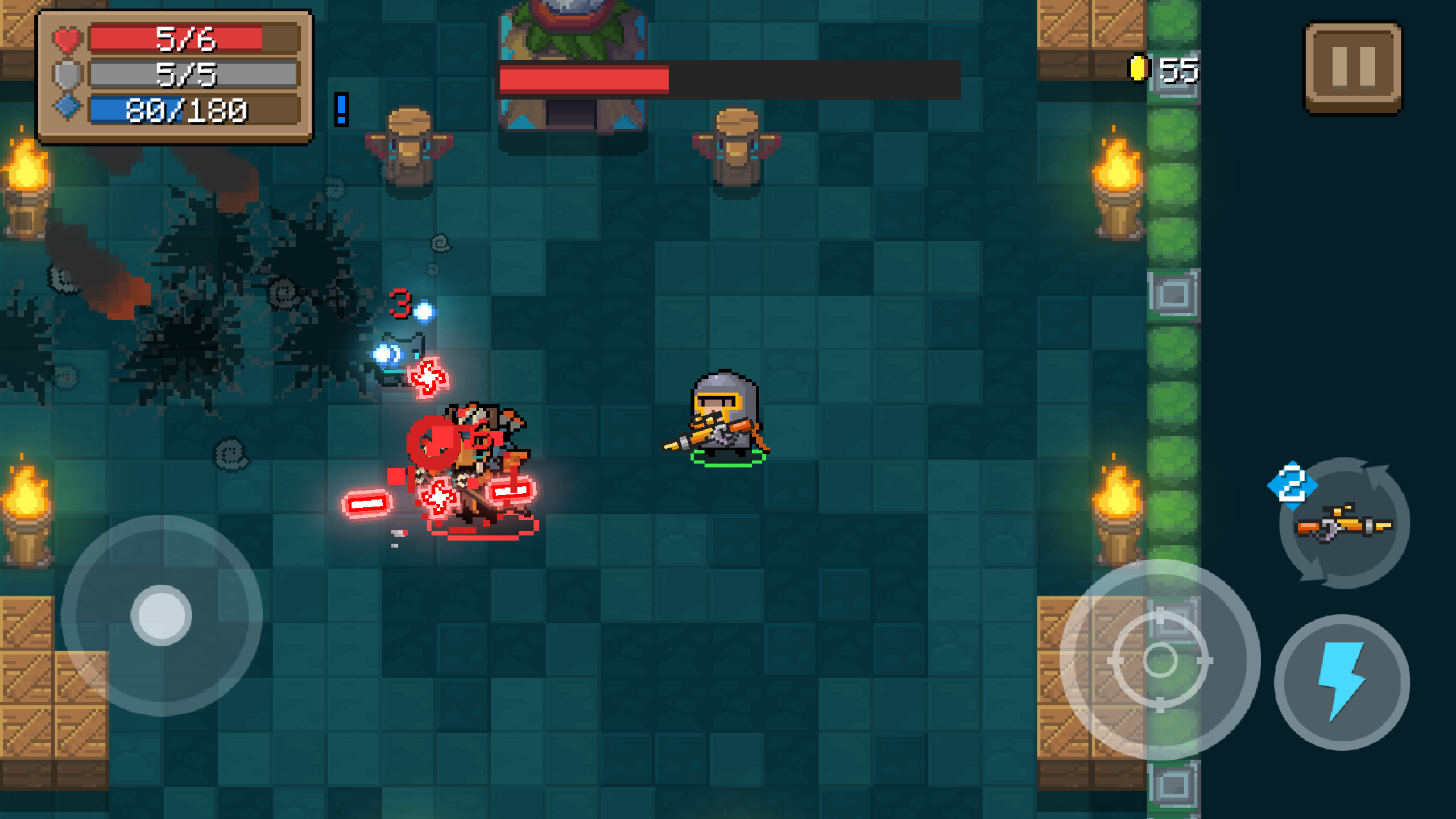 Aside from the chaos, one of the best parts of the game are the alternate weapons you can pick up along the way. Think there’s no way a blow gun will get you farther than dual pistols? There’s only one way to find out – experiment. When you pick up a new weapon, you leave the old one behind and it’ll stay there in case you change your mind a room or two later (so long as you stay within the same stage).

The control system in Soul Knight is pretty straightforward. An onscreen joystick in the bottom left corner is what lets you control the speed and direction of your movement (it’s so smooth you’ll be left wondering why more driving games don’t give you a joystick option). Your trigger is bottom right next to your energy meter.

One of the lessons you’ll learn quickly in Soul Knight is that it’s ok to need help. Your companion pet and, more rarely, additional companions collected along the way can be a real source of help throughout the game. When you’re running on empty – low energy, poor health – they can pick up some of the slack while you recharge a little. If you get sick of the companion pet you’ve got, a quick trip to the pet slot machine (50 coins a go) might net you something more your speed. 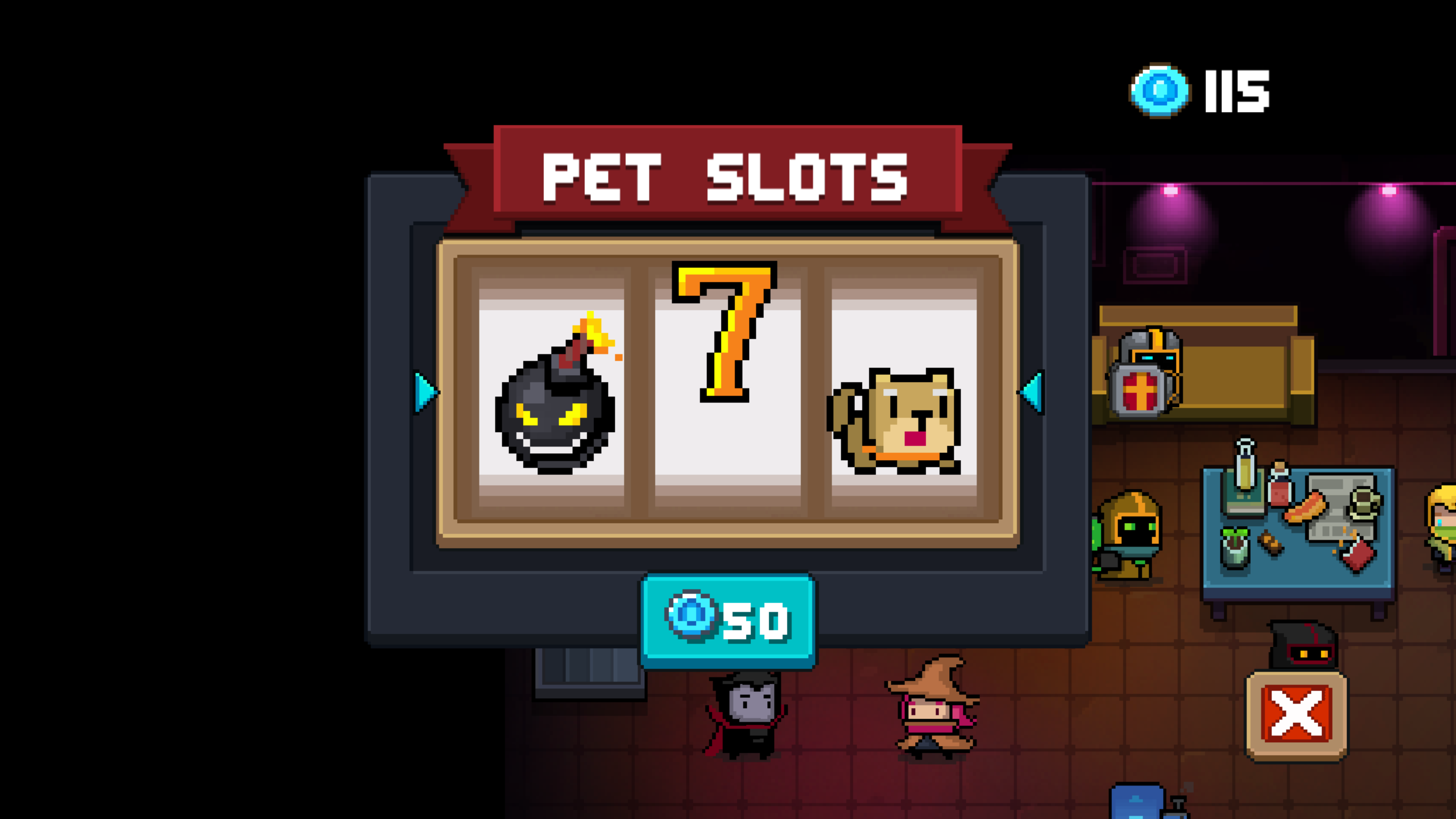 Something worth noting about Soul Knight is that the game is completely, utterly free-to-play. The game’s premium currency (gems) is available as an in-app purchase and can be used to unlock characters and revives, but they don’t have much bearing on the gameplay experience. Using a revive does kill some of the sense of accomplishment you might otherwise have from a really good turn. Besides, if you don’t want to use gems to revive yourself, it’s possible to watch an ad instead. Like with the in-app purchases, watching an ad is your choice and you don’t have to watch ads to have a good time. This is awesome in a lot of ways, but it is worth keeping in mind that if you don’t support indie developers like Zeyang Li who make great games like Soul Knight it’ll be hard for them to keep making games.