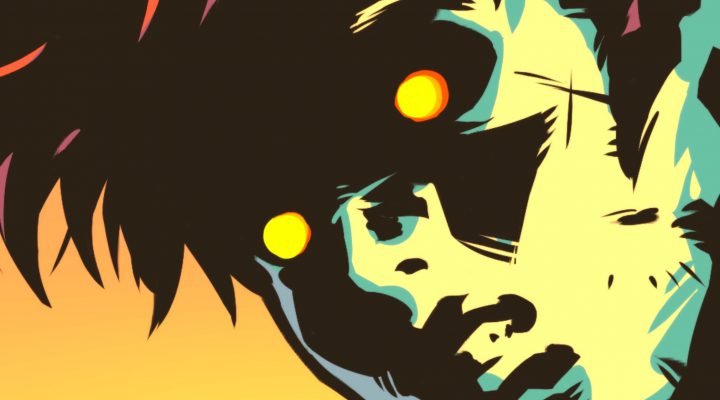 Gameplay graphics a let down after watching the cutscenes.

Likely too hard too fast for some casual players.

Allies can be as much a hinderance as a help.

Sonny is something of a unicorn in this industry; the rare, long-beloved RPG that has been able to reinvent itself successfully on mobile. Based on the original Sonny series, which became one of – if not THE – most beloved flash-based RPGs of all time, Sonny for mobile offers a concise but challenging strategic combat experience. Beyond the gameplay itself, the stunning comic-book style cutscenes and an engaging storyline will leave you pouring hours upon hours into making it to the next chapter of the story.

What sets Sonny apart from other RPGs that have made the transition to the mobile space is that they have struck the perfect balance between attracting a new fanbase and retaining the game’s old one (though not without the odd complaint). For those who don’t consider themselves ‘real gamers’ (whatever that term means today), jumping into any RPG can be intimidating. Jumping into a RPG around which there is a lot of nostalgia can be a downright terrifying prospect. But with Sonny, Armor Games and Krin Studios have created a game that’s as accessible as it is challenging. As long as you can think you can play. 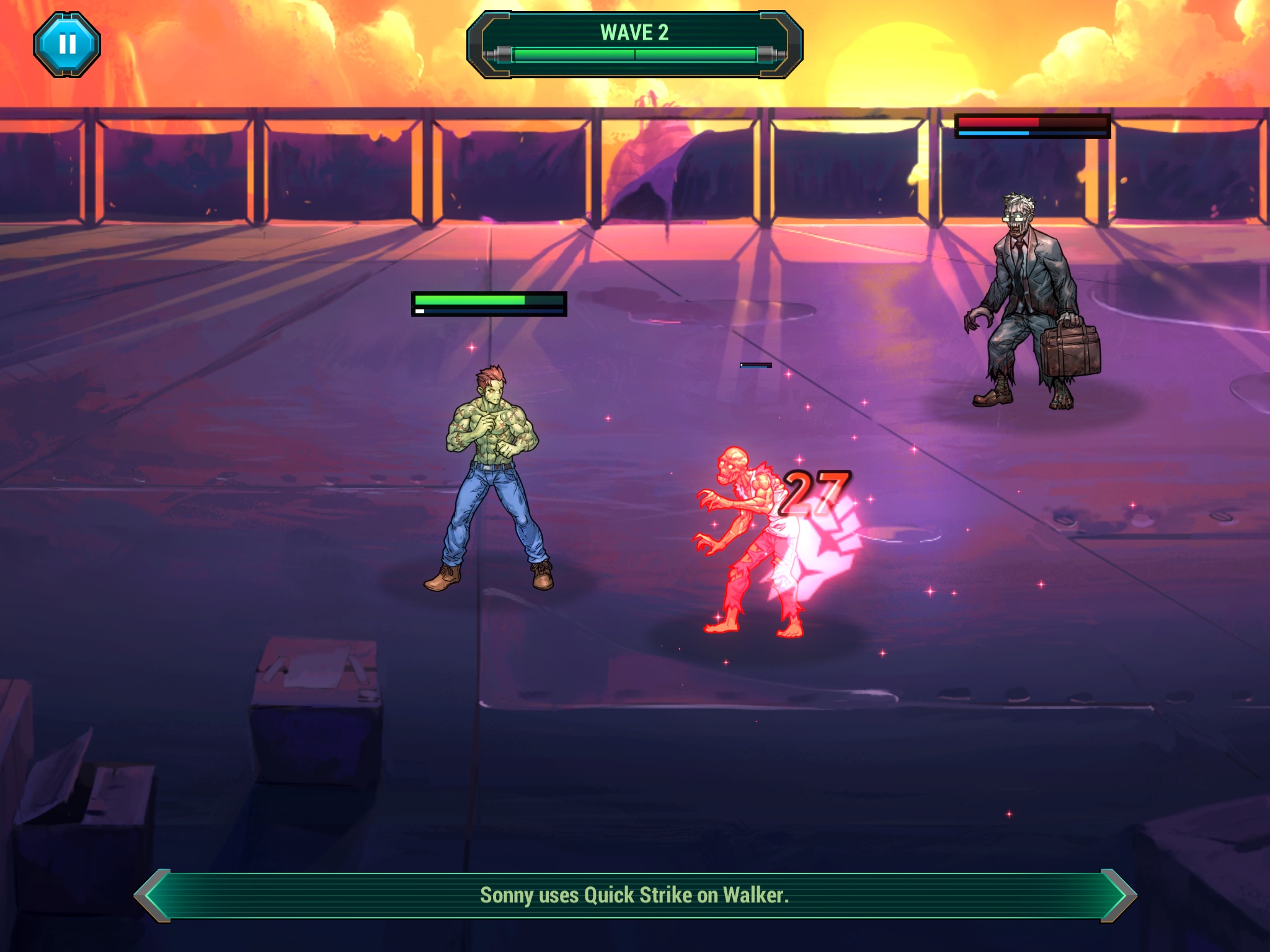 Whether you’re an RPG master or it’s your first time playing this type of game, paying close attention to the tutorial levels, themselves skilfully integrated into the storyline, is key to your success (or lack thereof). There is no reward for button smashing here as this turn-based RPG requires some patience and forethought. Without strategically planning your attacks (and carefully spacing out your defensive moves), your journey through the game will be short-lived.

In Sonny, you play as the titular character. After a catastrophic incident finds Sonny finds himself trapped somewhere between human and zombie. Once fully human, he’s recently been involved in an unspecified catastrophic incident that’s ended with him at sea on a burning boat slowly turning into a zombie. That is until a mysterious man named Louis, who may or may not be a medical professional, ‘saves’ him with a mystery shot so that Sonny can, in turn, help save the ship and its survivors from zombie attack. Being part zombie means that Sonny has no real memory of his past life, something that bothers him more than the player (at least initially) but has, quite critically, gained the ability to partially regenerate. A fair trade-off for sure.

However, as great as self-healing might be Sonny quickly learns, it isn’t easy being green. As human allies are introduced, they do little to hide their suspicion of their off-colour teammate. Ultimately there’s no choice but for them to get on board. When trying to survive and save the world simultaneously, there’s little time for hesitation. Through overcoming his challengers, Sonny learns more about himself – who he was and who he needs to become.

In stark contrast to the cutscenes, the gameplay itself isn’t graphically rewarding. There’s no gushing blood, or end-of-life combustion. Characters glow red when struck and stay a paler shade of red while bleeding. Sonny is overlaid with green bubbles when you’ve been struck with venom. There’s no visual rendering of the items Sonny carries into battle. It’s pretty simple overall. But for fans of the original Sonny series, this will all feel familiar. While new players might be disappointed, by the time they’ve reached Zone 2, the pressure to think three moves ahead means there won’t be the time or brain capacity to notice the graphics anyways. 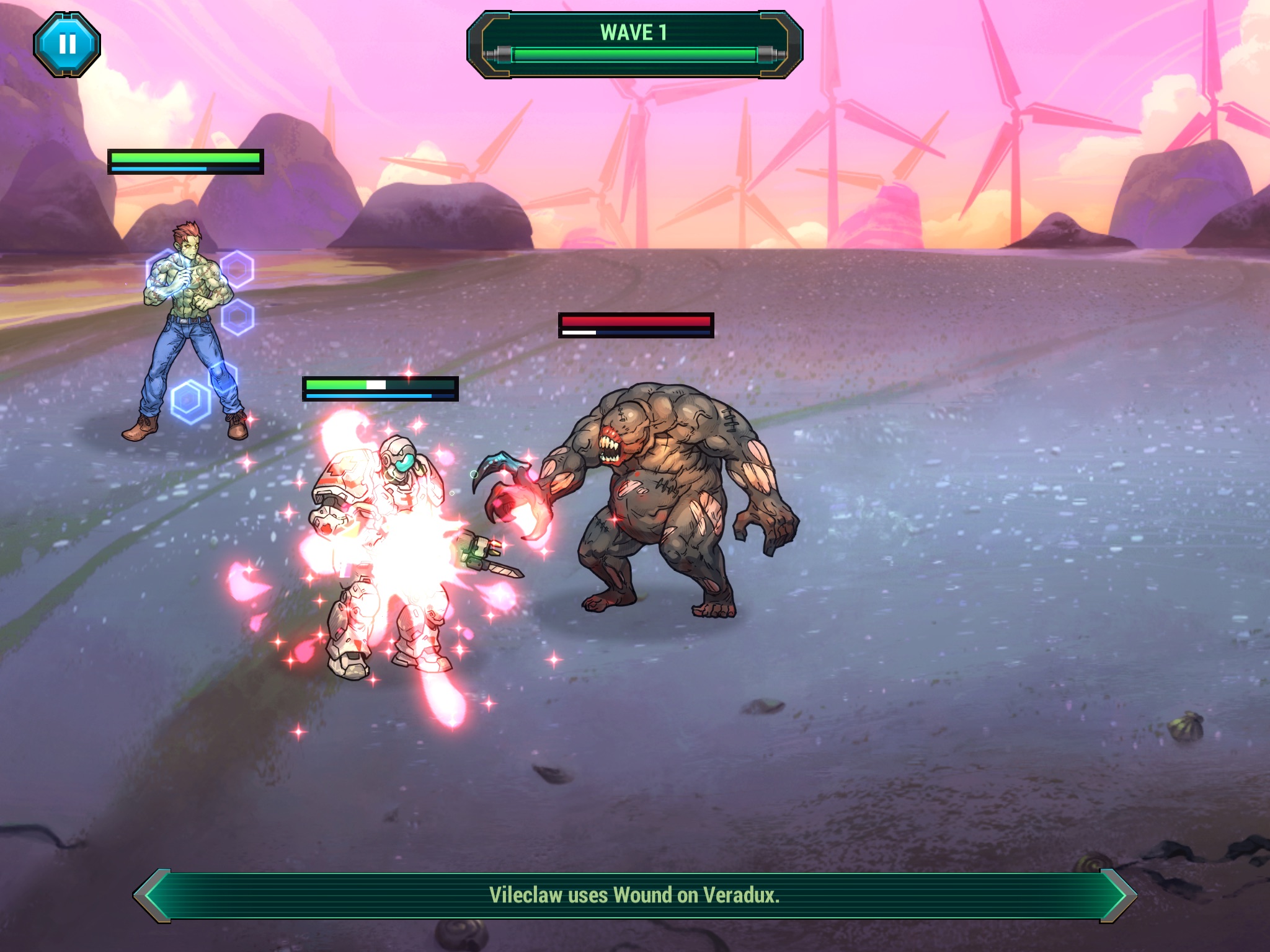 Although it’s possible to describe Sonny as a stripped-down 2D Dead State: Reanimated with a similar look and menu feel to Fantasy War Tactics, in a lot of ways it feels more like a single-player strategic combat deck-building game like Sentinels of the Multiverse or Legendary in terms of the interplay of story and gameplay. There’s the aforementioned comic-style cutscenes, obviously, but there’s also the simplicity of the attacks, the choices that need to be made about the equipment you’ll carry, and the reliance upon teammates of varied abilities and reliability.

Also working in Sonny’s favor is that it offers RPG fans an escape from the type of social gameplay that has become all too common and is often demanded with the most popular games. As inept as your computerized allies might often be, Sonny is a nice respite from having to figure out how to work as a team with your third cousin Tom roped in from your list of Facebook contacts, despite having not spoken to him since ‘the incident’ at the family reunion of 2008. You don’t have to rely on your sister to selflessly give up her turn to heal you either. It’s just you, your wits and a bit of luck. Team sports are great, but there’s something to be said for going it alone once in a while.

For those that are sick of ads, it’s also worth noting that Sonny’s a paid game by design. No advertisements, no in-app purchases. If you need more in-game currency, used to allow you to reset your skill (attack/defence) wheel, it’s possible to get it through either combat or training your character. Skill points, required to learn new attacks or defenses, are earned by leveling up. Items are won through gameplay. You get more than your money’s worth with Sonny as a result.

One can only hope that this game is successful enough to justify a sequel of its own (a new Sonny 2 if you will) down the line, perhaps with slightly more elaborate gameplay graphics and a slower progression in difficulty.