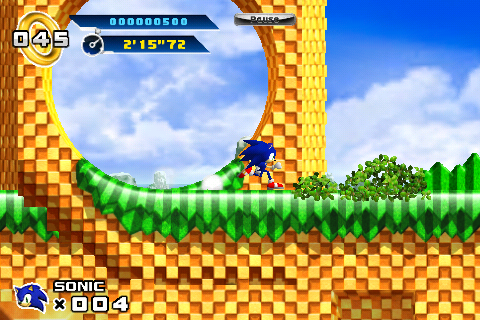 Everyone’s favorite blue hedgehog is back!

Growing up in the early 90’s, I have my fair share of Sonic the Hedgehog memories to look back on. I remember buying my first SEGA Genesis – a version that came bundled with everybody’s favourite blue hedgehog. I remember lining up to buy Sonic 2 at the local department store on “Sonic 2sday.” I even remember spending countless hours playing Sonic Spinball with my friends. Now, thanks to SEGA, I have a new memory to add to that list.

Sonic the Hedgehog 4: Episode 1 is SEGA’s attempt to deliver a classic 2D Sonic experience to fans who’ve been clamouring for a return to the early days of the series, and they’ve delivered in spades. Everything from the title cards and levels to the music and gameplay harkens back to the earliest games in the series, while at the same time the visual polish and presentation simply screams 2010. Sonic 4 is, in essence, the best of both worlds.

While there have been some outstanding 2D Sonic games in recent years that have gone largely overlooked (Sonic Rush, the fan-created Ultimate Flash Sonic), Sonic 4 brings things back to basics. Rather than building on everything that’s happened in the world of 2D Sonic in the last 19 years, the game seems to take most of its gameplay cues from Sonic 2. Spin dashes, multiple paths, and lots of good old-fashioned platforming set the stage for what is easily Sonic’s best adventure in years.

What makes it so great? Outstanding level design. Sonic 4 is divided into four different worlds (each of which offer up three stages plus a boss stage), and not a single level fails to impress. Each world either intentionally or indirectly pays homage to a Sonic world of the past – again, many of which parallels content from Sonic 2. The initial world, Splash Hill Zone, showcases the same hilly greens we’ve seen in stages like Emerald Hill Zone. Casino Street is a clear successor to Casino Night. Lost Labyrinth feels a little like Aquatic Ruin, and finally Mad Gear Zone feels like every tech-heavy Eggman zone you’ve ever explored (with a dash of Sonic 2’s Chemical Plant for good measure).

But it’s not just how well these stages hit our nostalgia button that makes them so great – the layouts are wonderfully unique and challenging. In one level you may be riding steam that shoots out of pipes, while in another you’ll be outrunning an ever-vigilant wall of death. With lots of great opportunities to pick up speed mixed with branching paths and a plethora of dangers, the level design here absolutely shines. 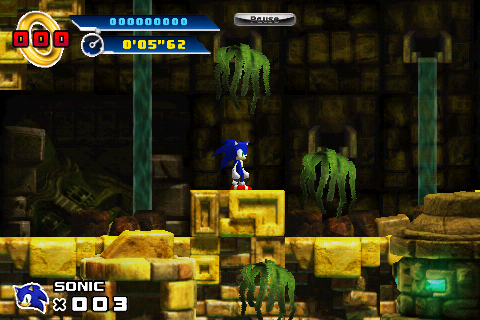 But sometimes navigating these levels can feel less than intuitive. By default, Sonic 4 presents players with on-screen directional and jumping controls. They perform competently, but competent isn’t the same thing as perfect. Sonic frequently finds himself in situations where he needs to turn from left to right quickly, and the way the touch controls are implemented here doesn’t always allow for that. The same goes for jumping. A well timed leap can be crucial in certain situations, but with how small the button is, it can be all too easy to tap outside of the required area.

Switching to tilt controls proved surprisingly more effective. Since the game requires little more than left/right guidance and the occasional jump, tilting Sonic quickly felt second nature. Still, even here the controls weren’t perfect. Performing Sonic’s patented spin dash requires you to hold your finger on top of Sonic for a second or two, and it just feels counter-intuitive when most of your hand is wrapped around the back of the device for tilting. There aren’t too many areas of the game that require the spin dash, but the discomfort could have easily been avoided if they’d simply made a tap on the left side of the screen a dash and a tap on the right a jump. It would be great if they’d employ a control scheme like this in future episodes. 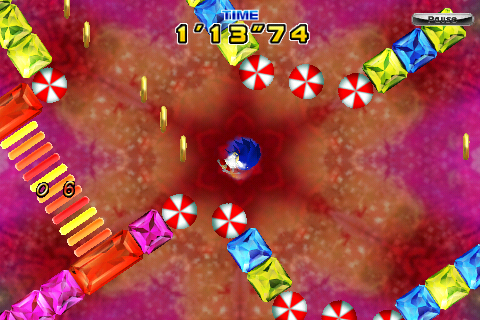 Sonic 4 also features a few levels that are exclusive to the iPhone, and they really showcase how solid SEGA’s tilt gameplay can be. The first of these, a mine cart adventure, is a fun little romp – but where the tilt gameplay really shines is in the special stages. Identical to the special stages in the original Sonic the Hedgehog, players will tilt their device left and right to guide a spinning Sonic through a dream-like maze in search of a Chaos Emerald. The gameplay here is similar to Rock’n’Roll, an early iPhone game that made me desperate to play Sonic’s special stages on the device. As it turns out, it was well worth the wait.

With only 12 real levels (not including the special stages and boss fights), the game is a little shorter than some might have expected for its $9.99 launch price tag. And for a game that sat in the cooker as long as this one did, we can’t help but be surprised by the less than perfect nature of the controls. Still, there’s no denying that Sonic the Hedgehog 4: Episode 1 offers just about everything an old school Sonic fan could ask for. With smart level design, sharp visuals, and a good deal of challenge, there’s no question that the Sonic 4 series is off to a great start. If fans can get used to the less than ideal controls, they’ll be more than satisfied with everything else this one has to offer.