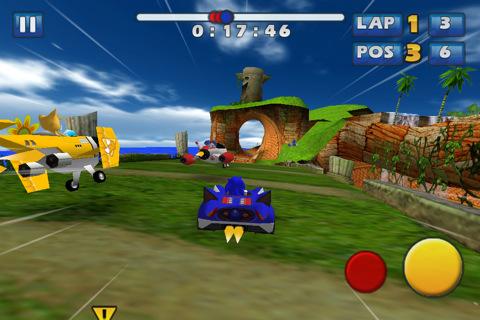 The name Sonic the Hedgehog is synonymous with gaming. Back in the 1990s, it was Sega’s answer to Nintendo’s Mario. He was everything Mario wasn’t: fast, cool and hip. Of course within a decade, Sega stopped making gaming consoles and started making Sonic games for Nintendo’s systems. Despite this, Sega still tries to put him in the same league as Mario. With its almost shameless Mario Kart ripoff of Sonic & Sega All-Stars Racing, Sega does a really commendable job. But just like the rest of Sonic’s games, it’s just not as good as Mario’s.

A port of the same title on home consoles, the iOS version of Sonic & Sega All-Stars Racing features Sonic the Hedgehog and a smattering of other Sega characters in a kart-racing battle royale. So what if one of them is a teen seeking revenge for the murder of his father driving a forklift beside an anthropomorphized mouse? Or a walking, talking fox with two tails? It’s not about realism, it’s about fun, with a bit of nostalgia and fan service thrown in for good measure. Here, Sonic & Sega All-Stars Racing definitely delivers.

The game features all the best parts to kart racers: bright, vivid character design, useful items, drifting, speed boosts and traps, plus hidden paths. The character roster is not that big, but varied enough in terms of different drivers and different strength. The more you play the more Sega Miles you earn, which help unlock new courses, characters and other bonuses. There’s a lot of stuff to unlock, so completionists will have a good run with Sonic & Sega All-Stars Racing.

The graphics and sound are absolutely top-notch. While not photorealistic or detailed like Rage or Infinity Blade, they are, without a doubt, some of the smoothest and cleanest visuals on the platform. The music is taken directly from the Sega titles that inspire the courses and characters. It’s all really good quality stuff.

Sonic & Sega All-Stars Racing also features a mission mode, where you’re given a time limit to complete a task like collecting coins or finding hidden gates. The better you play the more stars you earn, opening more missions. They’re a lot of fun, decently challenging, and provide a lot of legs to the game.

These are, unfortunately, needed for Sonic & Sega All-Stars Racing, as you’ll probably have played every single regular racetrack within an hour. There just aren’t that many courses to play, and unlocking all of them isn’t that tough. When playing in Grand Prix mode you’ll have to finish all the courses on Easy before unlocking Normal, then Hard. However, you’ll know them all so well that the only difference in difficulty is that the computer just gets cheaper. There’s a little bit of rubber-banding too (where you can never have a huge lead since the computer just keeps up automatically like they’re attached to you by, well, a rubber band). It was cheap back in the first Mario Kart, and it’s still cheap today. This isn’t good game design; this is just a way to make players mad. 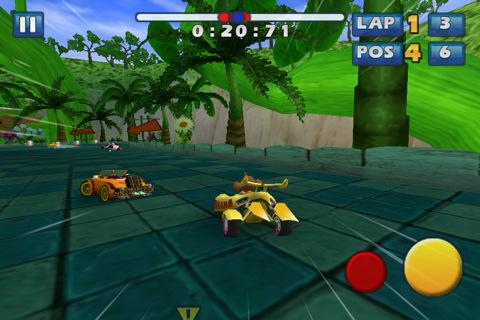 The later courses also start to rely on timed traps and gimmickry other than good, solid course design. Some of the ones without these traps are just nigh unplayable. The House of the Dead – sorry, Curien Mansion here, for some unknown reason – are so dark, you can’t play them. Walls are black, roads are black, and there’s no way to change the brightness in the game to actually see them.

Finally, there are a few thematic elements that simply make no sense at all. Sonic the Hedgehog is one of the fastest living things around. So why is it that he needs to be in a car? (Fun fact: Google a terrible old game called Sonic R and you can see just how bad a Sonic racing game without cars can be.) Other oddities exist too, like how Tails the Fox riding in his signature airplane can somehow fall of a cliff. Huh? And then Ryo can speed up from his sports car by dashing in a forklift? It’s all from the game Shenmue, but it seems like Sega was just reaching.