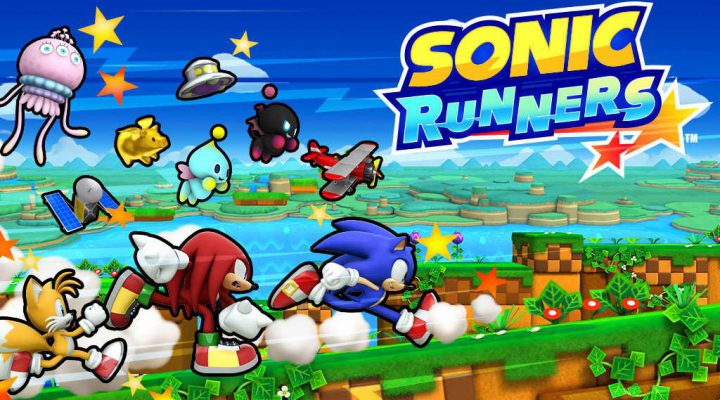 Tons of power-ups and other bonuses to collect, try out, and go crazy with.

In-game economy is extremely fair and never feels like pay-to-win.

Level design can get a bit repetitive, especially between stages on the same episode map.

Stories and dialogue presented in the episodes aren't very interesting.

Although different characters provided added variety, separate level-ups makes it difficult to use them all freely.

It took years after Canabalt and Temple Run made the endless runner one of mobile’s hottest genres for Sega to put two-and-two together in Sonic Dash. Their speedy blue mascot is perfectly suited to a game based entirely on nonstop movement, and Gamezebo’s own editor-in-chief Jim Squires called Sonic Dash “the best we’ve seen in the genre.” So who needs Sonic Runners? 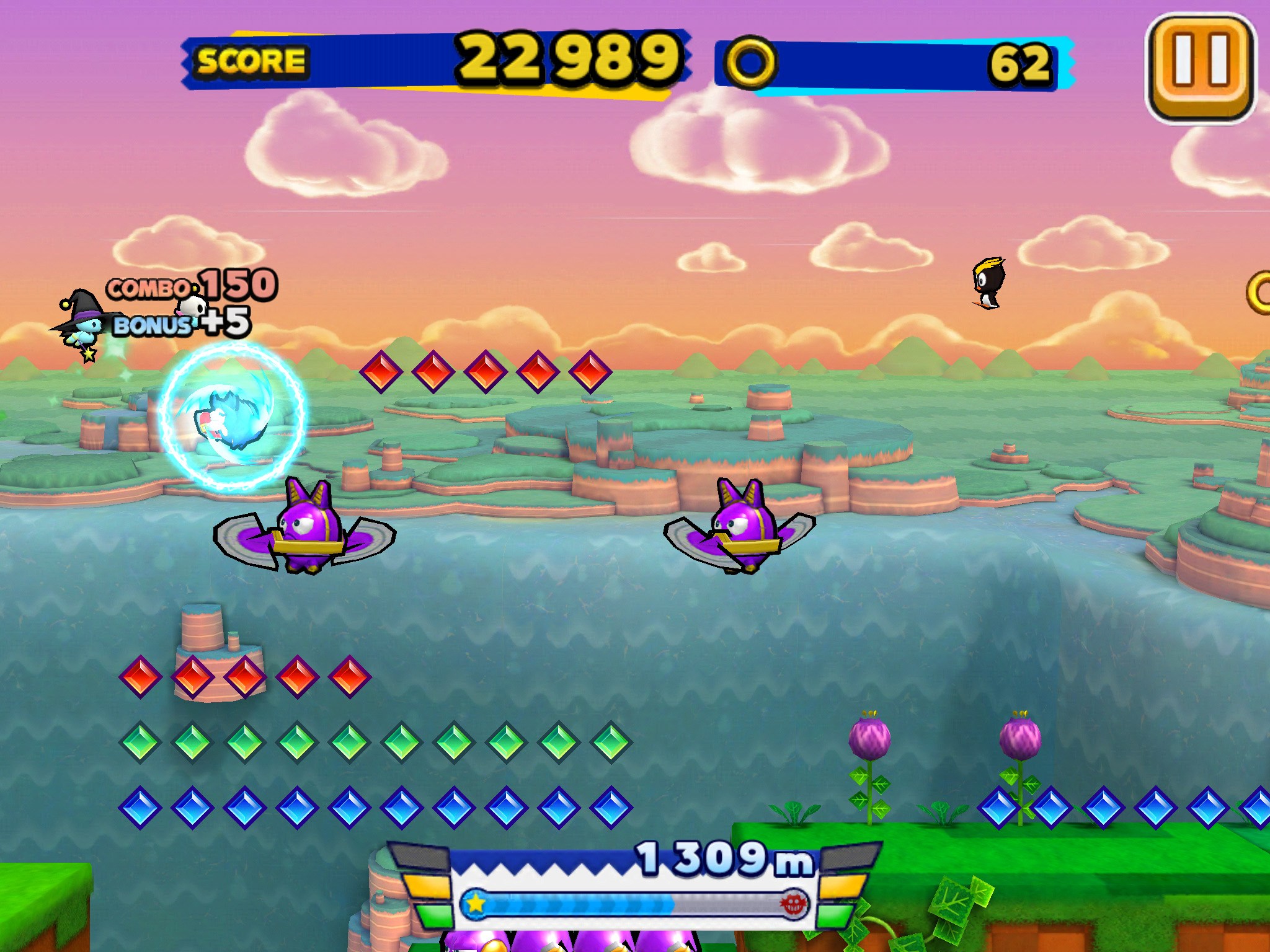 Despite their shared universe and genre, Sonic Dash and Sonic Runners are two extremely different games. Where Dash used the Temple Run/Subway Surfers over-the-shoulder, multi-lane layout to create a familiar mobile experience starring Sonic, Runners feels more like a classic Sonic platformer that’s been tweaked to the endless format. The 2D, side-scrolling point of view is reminiscent of the original Sega Genesis entries, complete with ring-rewarding loops, chained enemy bounces, sky-flying springs, and multiple paths to choose from. Speeding through the levels provides the same sense of barely-there control and split-second decision making that made the classics such a rush.

Although the gameplay itself is technically “endless,” Sonic Runners uses a few techniques to add a sense of progression and finiteness to the world. To start, players will move through “episode” maps as they earn points in-game. Each episode focuses on an event typically revolving around Dr. Eggman, an evil plot, and animals in danger, but occasionally episodes will chain together to form a larger story—like a missing Chaos Emerald. Although the pop-up cut scenes and plot points encountered as you move through maps are not compelling enough to encourage progress on their own, the accompanying rewards—including items, rings, and increased ranks—provide an added incentive to keep going. 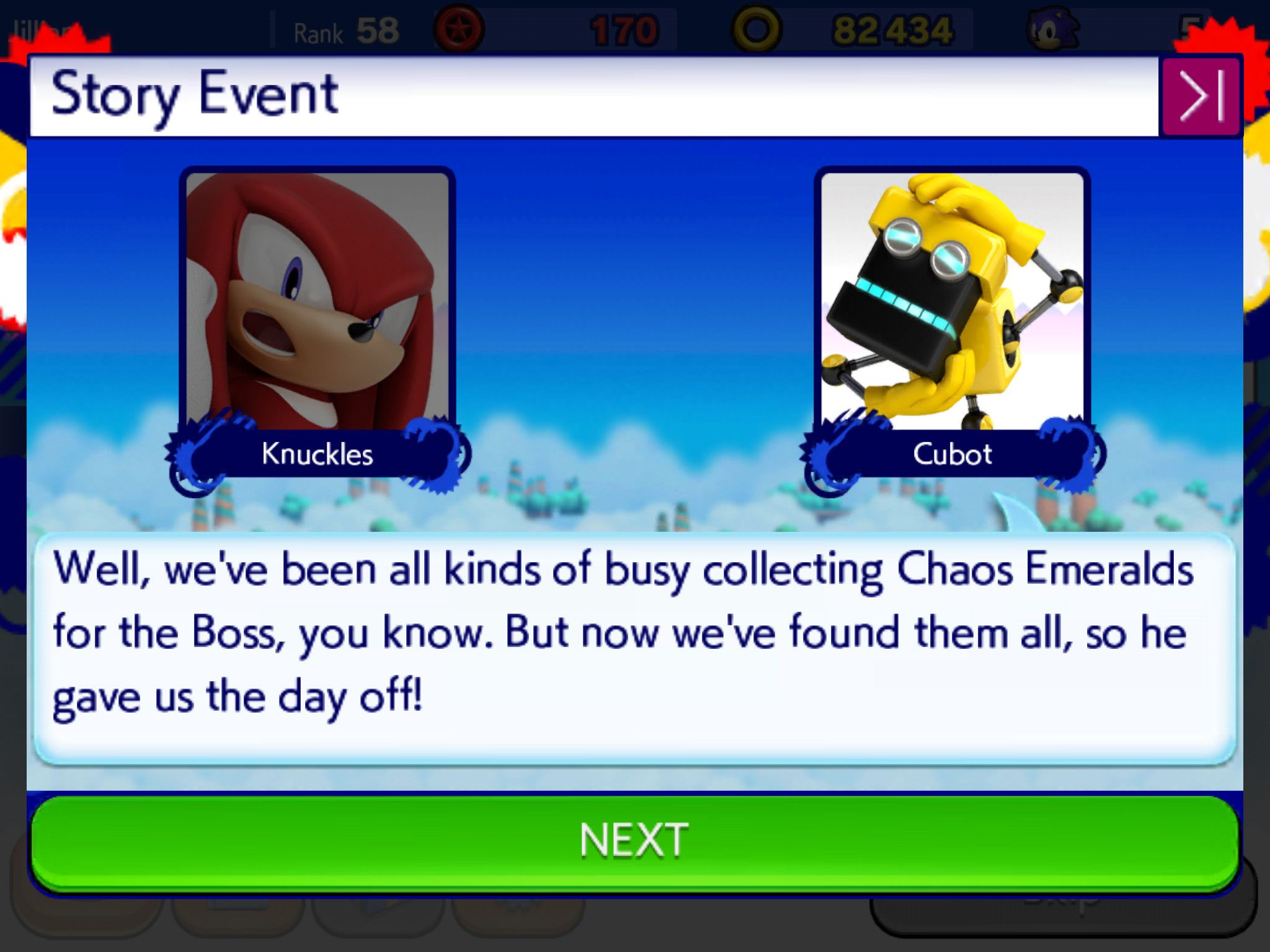 In addition, the levels themselves are not entirely endless. After fighting Eggman and speeding up three times, the “top speed” section of each stage provides you with no rings and thus no protection against damage. Although you may survive this level of hazard for some time, it’s a given that you will eventually hit something and bring your run to an end. This reinforces the level-based, platformer-inspired aspect of Sonic Runners: the distance you run rarely increases significantly, but your strategy and score within that distance will grow along with your skill.

Running those levels is a fast-paced flurry of jumping on enemies, dodging obstacles, and working towards numerous score-boosting goals. Sonic Runners utilizes a significant number of bonuses when calculating your final score total, allowing players to focus on different aspects to make the most of their time. Rings are used as your single-hit shield and to buy power-ups, but they also provide a substantial score reward. Animals freed from burst enemies and then picked up will award their own bonus. Gems contribute to your basic score, as well as your ongoing combo bonus that can increase your total exponentially with every item collected. There’s rarely a moment when you’re not grabbing or whacking something of value.

This nonstop collectathon of rings and points is maintained by single-tap controls that utilize your character’s triple-action abilities. When using Sonic, the hedgehog hero will jump at each tap, allowing three jumps in a row before touching the ground. Tails will jump once, then helicopter-glide on his subsequent two taps. Knuckles will jump, punch-dash forward, then jump again. Each character plays differently enough that you’ll inevitably have a favorite, especially since their respective level types—based on Green Hill, Sky High, and Lava Reef Zones—are designed to support their individual strengths.

Despite having only tap-jumps in your action arsenal, Sonic Runners feels more complex thanks to the variety of in-level obstacles that must be navigated, the multi-path stage designs, and the numerous power-ups that affect gameplay. Timing jumps properly to hit bouncy springs, ricochet off multiple enemies in a row, and avoid dangers like spikes and walls requires nimble focus. Taking an aerial path full of rockets and mines creates a much different challenge than the ground path marked by pits and enemies. The power-ups, while including longtime Sonic standards like the shield and invincibility, have included some special “Color Powers” from later entries which transform your character into a powerful wisp for a short period of time, completely changing their movement while destroying everything in their path. With power-ups appearing frequently in-level and available to equip as purchased items beforehand, there’s plenty of variety and moments of crazily blasting your way forward. 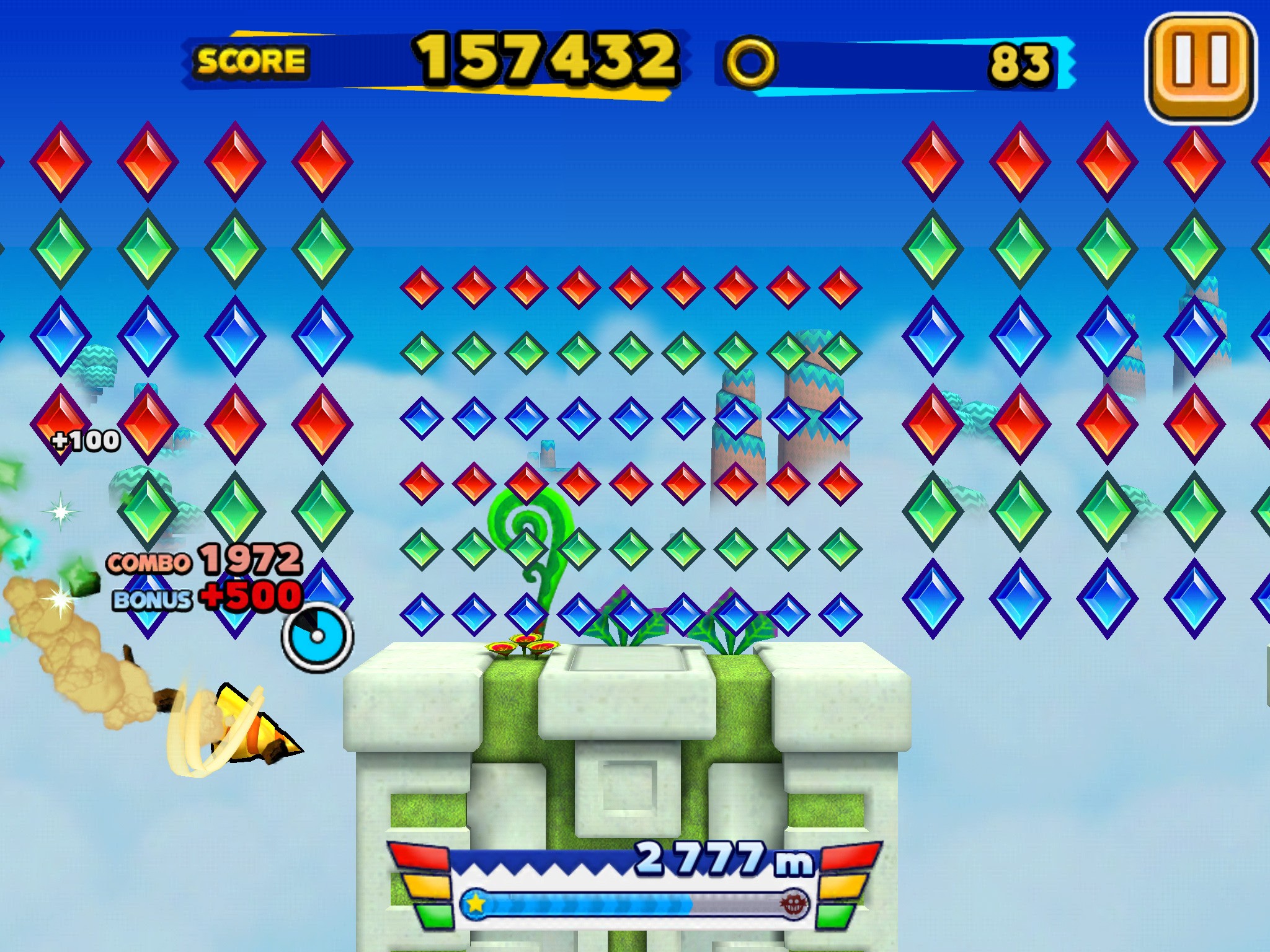 In between runs, you can level up characters with rings you’ve earned to increase their power-up duration and score bonuses. There are two roulette wheels (with daily or premium spin requirements) where you can win items and companions, who provide permanent bonuses when taken into a stage. There are also boss battles against Eggman at the end of most episode maps where you’ll need to jump on him in classic Sonic style while dodging his mechanical minions. The final non-level bonus feature are ranked, worldwide leaderboards where players compete against those in their same class, moving up at certain ranks.

While all these different features feel a bit disjointed and overwhelming at first, they ultimately combine to add to Sonic Runners’ variety as well as your ability to do well in the runs by awarding rings and items. The option of taking items into runs with you allows players to compensate for specific weaknesses—like my tendency to fall into pits—while the three-item limit prevents crossing over into pay-to-win territory. And, in fact, Sonic Runners is surprisingly well balanced in its economy: although you’re able to buy rings or red star rings (the premium currency), both are doled out extremely generously. Lives, which are used on each run, are refilled at the end of every episode map, leading to little to no downtime between plays. 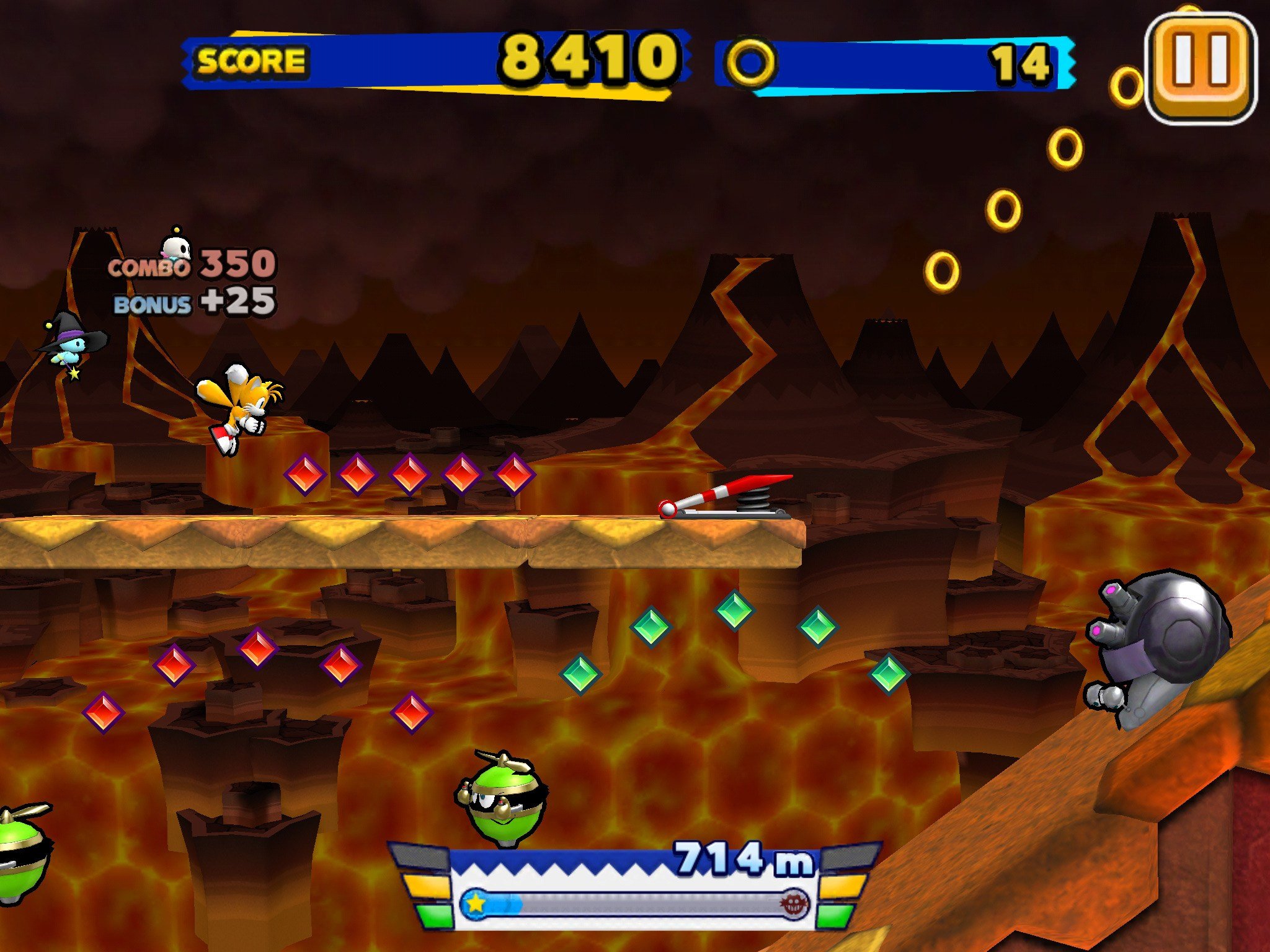 The final result is frantic, polished gameplay similar to what Sonic Dash fans fell in love with, as well as a more classically Sonic, platformer-inspired experience that old school players pined for. Sonic Runners should be the game of choice for retro Sonic fans, as well as anyone who enjoys go, go, go, going fast.

UPDATE: This review was based on a pre-release version of Sonic Runners. We have since learned that the final build changed some of the elements we spoke of here, specifically the game’s monetization. The current version features fewer lives, longer refill timers, and frequent video ads, all of which interrupt the gameplay more than we previously encountered. We apologize for any confusion this may have caused.