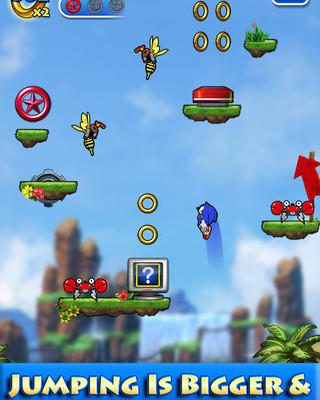 Sonic Jump is everything you’re hoping for, but only if you push through the initial drudgery.

“Oh look, SEGA decided to make a Sonic Doodle Jump clone three years after anyone would care.”  If that’s what you’re thinking, it’s ok – nobody would blame you.  The gut reaction to Sonic Jump is a tough pill to swallow.  And when you hear that it’s actually affiliated with a mobile game that predates smartphones, well… that doesn’t make things any easier. Ignore these initial warning signs though, and what you find might just surprise you.

The problem is that this surprise isn’t going to happen right away.  For the first third of the game, you’ll probably feel that your “Sonic Doodle Jump” assumptions were right on the money.  Sonic jumps automatically and vertically, the game feels slow as molasses, and there’s little (if anything) to set it apart from a sea of competitors that – let’s face it – were all released ages ago.  The only real difference – at least initially – is the Sonic branding and the fact that the game is split into levels (though an endless option exists as well.)

The entire first world of the game plays like this, and it’s a problem that’s likely to shoot Sonic Jump in the foot.  Most gamers won’t bother working their way through 12 levels to see if it gets any better. They’ll try maybe two or three stages and then delete it from their phones forevermore.  I know that’s what I would have done if I wasn’t playing it for a review – and it’s a real shame, because starting with World 2, this is exactly the game you want it to be.

Things pick up on the first stage of world 2 and continue to soar from there.  Unique elements – from cool platforms that rotate on gears to falling rocks and disappearing ledges – are introduced stage after stage.  And with ledges placed closer together and dangers running rampant, the experience goes from a Doodle Jump slow to a Sonic the Hedgehog frenzied fast.  By the time you’ve unlocked World 3, you’ll be cursing you’re your phone for the game’s blistering difficulty – and we mean this in the kindest way possible.

In addition to the later levels’ challenge, Sonic Jump has a few other elements that belong in the win category.  The visuals are a good fit for the Sonic universe; there’s something about the modern cartoony 2D portrayal of Sonic that just puts a smile on my face.  And the music is as typically bouncy and adrenaline-pumping as ever. 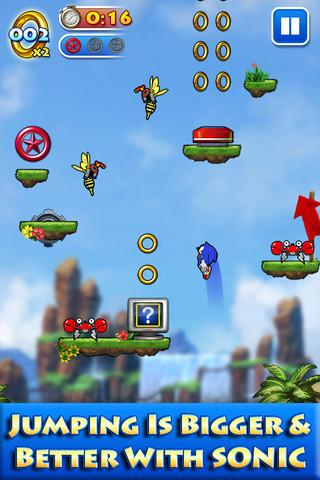 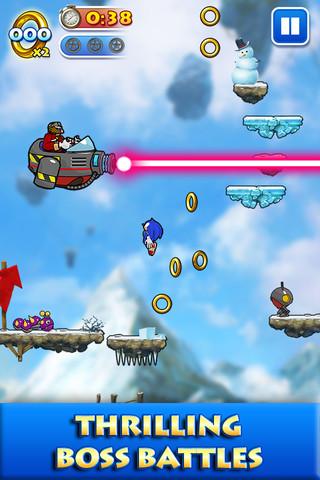 The only real sore spot in the game (asides from the entire first World) is found in its missions and in-app purchases.  SEGA has slapped on a “do X many of Y” mission system – the kind that first made a splash with Jetpack Joyride – and it feels terribly out of place here.  Completing missions will help you level up which in turn unlocks new items in the store – but none of the items you can buy feel all that necessary or exciting.  You can buy items that will help you tough it out in difficult levels, but in a game like this, wouldn’t you rather just test your skills and try to get better on your own?  It’s the old school gamer’s way!

Purchases can be made with rings – the currency you’ll collect as you play through stages – but you can always buy more rings with (you guessed it) in-app purchases.  After reaching some pretty high levels you’ll be able to unlock new characters (Tails and Knuckles) for purchase with rings, but honestly, I’d rather have just paid 99 cents to get them early and be done with it.  Unfortunately, that’s not an option.

Old school fans of Sonic tend to want two things: speed and challenge.  Sonic Jump delivers both, but just a little too late in the game.  It’s not that you’ll have to play for half an hour to get to that point – but mobile gamers are an impulsive bunch, and they tend to know whether or not they like something in the first three minutes.  If you can push through the first world, there’s a lot to love about Sonic Jump.  And besides, even though you don’t want to admit it, we know there’s a little Doodle Jump love left somewhere in your heart, isn’t there?