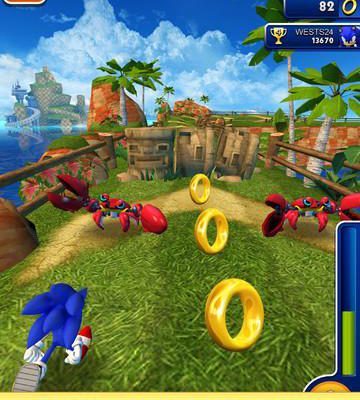 A Sonic game the mobile generation can be proud to call their own.

For someone who seems to speed his way through life at a breakneck pace, Sonic the Hedgehog really knows how to get stuck in a rut.  SEGA’s flagship franchise has suffered a series of missteps since 2003’s Sonic Heroes, with the only few bright spots in the last decade being old school 2D releases like Sonic Rush and Sonic the Hedgehog 4.  And for me, the frustrations go even further back.  I couldn’t even get into the Sonic Adventure series (sacrilege, I know).  In my experience, everything post-1993 has been something of a letdown.

At least it was until today.  Mark March 7, 2013 on your calendars, boys and girls; today is the first time in 20 years that SEGA has put out a Sonic game that you absolutely have to play. 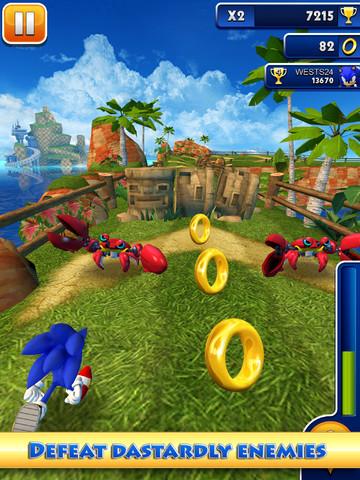 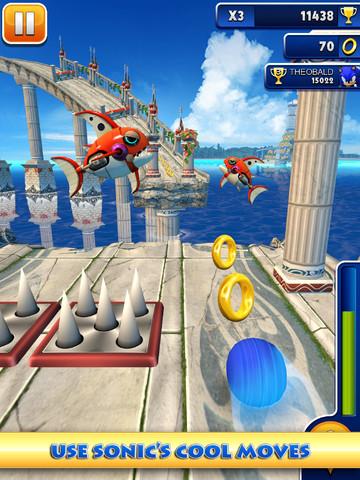 While you’ll be quick to judge Sonic Dash as a Temple Run clone (and rightly so), I honestly couldn’t tell you the last time that a Sonic game felt so fast and so right.  Players will control the speedy blue hedgehog as he darts back and forth between one of three lanes that you pick for him.  As he runs, you’ll need to swipe up, left, down and right to dodge obstacles.  Swiping down will also curl Sonic up into a ball so that he can attack opponents, just as he’s always done with a little move SEGA calls the  ‘spin attack.’

Elements like this are what make Sonic Dash such a perfect blending of new formula and old franchise.  The pick-up-and-play controls will feel intuitive for anyone that’s ever played a Temple Run-style game before, but the game feels like Sonic.  Spin attacks, ring collection, loop-de-loops – it’s all here, and it’s all very, very Sonic.

But there’s one thing above all else that defines the Sonic the Hedgehog franchise: speed.  If it doesn’t feel fast, it’s not going to feel right.  Thankfully, Sonic Dash is exactly what you’d want from a Sonic the Hedgehog release.  If anything, the crazy pacing after you’ve survived a few minutes might just make this the fastest Sonic game get.  Blast processing, eat your heart out.

Ring collecting in Sonic games has always served two purposes; it provides players with a bit of protection should they take one hit of damage from an enemy, and collecting enough nets you an extra life.  But Sonic Dash is an endless runner, so lives don’t mean anything here.  Instead you’ll be given a choice of three random paths to take, one of which lets you bank all of the coins you’ve earned so far.  While it might make you a little more vulnerable, it also gives you the currency you need to purchase upgrades between rounds. 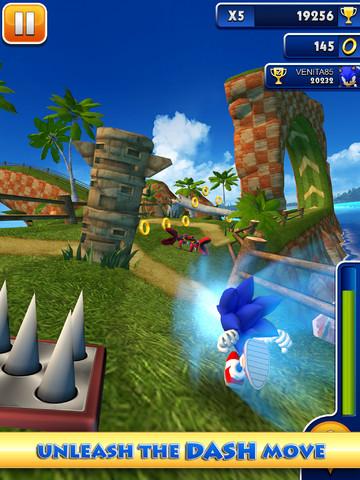 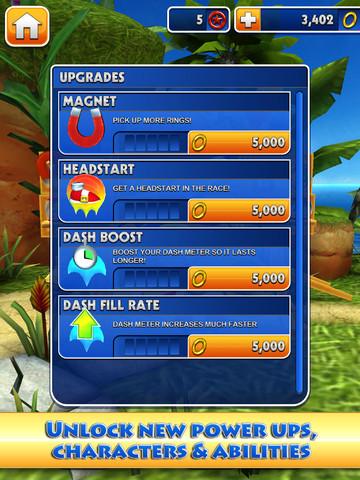 Like Temple Run, you’ll be able to buy upgrades that do things like increase your magnet duration or have your dash bar fill up faster (which is great fun, because tapping that dash button will send the little blue dude on supersonic autopilot for a few seconds).  You’ll also be able to buy head starts, and using premium currency, you can even continue your run should you fail and want to bail yourself out.

In terms of presentation, Sonic Dash absolutely nails it.  While people are quick to crow about games like Real Racing 3 having the hottest visuals on iOS, Sonic Dash manages to offer up an experience that’s graphically on par with (if not superior to) recent releases like Sonic Generations.  Both the character models and environments look terrific – we just wish there were more of them!

The only real sore spot in Sonic Dash is the lack of environments.  There are only two; one inspired by Green Hill Zone, and one inspired by Aquatic Ruin.  You could argue that there’s a third because you can choose a different Green Hill Zone with loops, but… come on now, SEGA.  Where’s something based on Casino Night Zone?  Or the Chemical Plant?  And where’s Dr. Robotnik?  There are so many iconic scenes in the Sonic franchise to draw from that being limited to just two is kind of a bummer.

Still, we’ve developed something of an old adage around Gamezebo over the past few years: “If the worst thing you can say about a game is that you want more of it, it’s probably a pretty great game.”  And not only is Sonic Dash a great game, it’s the best we’ve seen in the genre.  By combining the breakneck endless pace of games like Temple Run with Sonic’s old school sense of speed, Sonic Dash manages to champion two things quite well; taking an existing formula and bettering it, and developing a Sonic game that’s finally worthy of the hedgehog’s good name.