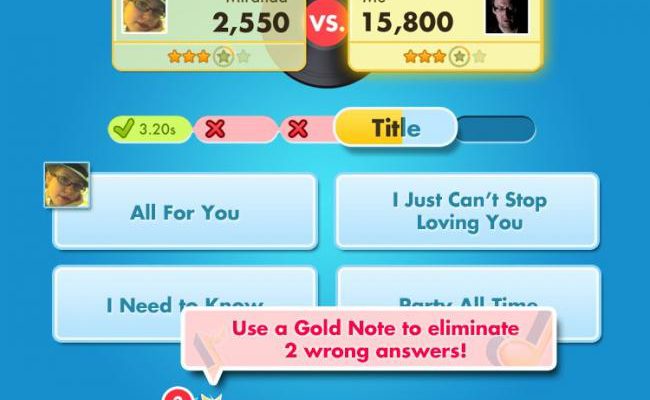 From the tripped-out Rez to the outlandish Parappa the Rapper, many of my favorite gaming experiences have centered around music. Song Pop for Facebook and mobile devices is a battlefield of sorts for music fans like myself; a place to test our knowledge of all things melodic. It may not feature a singing onion, but it’s certainly a lot of fun.

Players take turns trying to guess the name of the song or artist associated with whatever clip is being played. Each player’s turn consists of five song clips, and answering quickly (and correctly) unlocks new songs for the category you’re playing in. The list of categories is long, but includes things like 90’s alternative, love songs, classic rock, and classic rap. Every genre is well represented, and the inclusion of more off-the-wall categories like “one hit wonders” adds a lot of entertainment value to the experience. 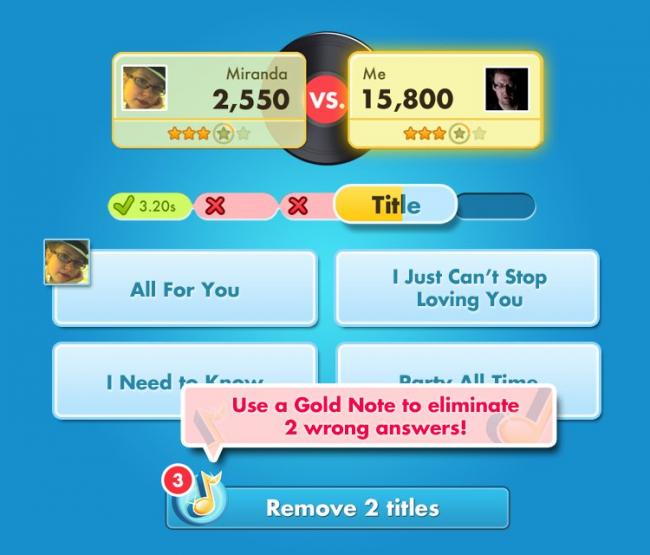 One of the more interesting elements of the game is that, so long as you don’t take the first turn in a round, it will show your opponent’s icon next to the answer they gave when you don’t answer faster than they did. It seemed strange to me at first, but I’ve definitely warmed up to it. After all, it doesn’t inform you of whether or not your opponent was right, so it really doesn’t give either person an unfair advantage.

Being that the game is so focused on competition, there’s no sort of single player component in Song Pop. You can play against Facebook friends, or strike up a match with a random opponent. The game features cross-play between the iOS, Android and Facebook versions via Facebook connectivity, so I wouldn’t worry too much about not having someone to play against at any given time.

I won’t lie: I went into Song Pop with a certain level of cockiness, thinking I’d have no trouble swiftly identifying the names of songs and artists in some of my favorite genres. At times that was true, but the game threw me plenty of curveballs, and even introduced me to a few artists I’d never heard before. Even more, I was paired against some opponents with a musical knowledge beyond my own, resulting in a healthy dose of humility. 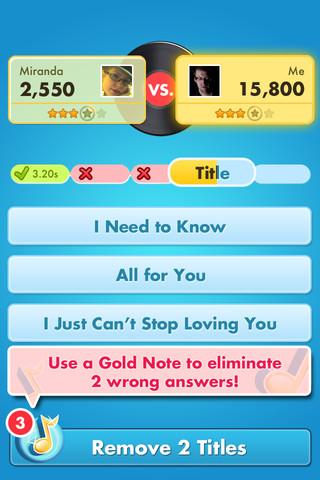 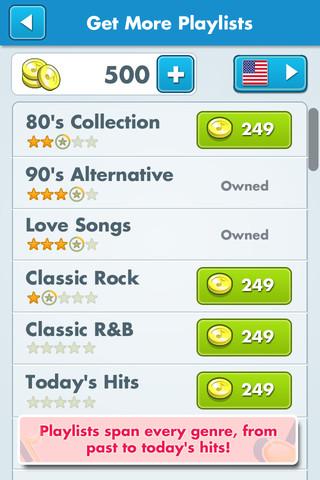 In response to this humble pie, I went ahead and purchased a couple of new playlists I felt confident in my knowledge of. The game gives you 250 coins to do so with from the start, and all but one of the playlists (“TV show themes” costs 399) are available for 249 coins. That helped, but so did the ability to spend “Music Notes” on eliminating two of the four possible answers for a song clip. Try not to spend all of your Music Notes on just that, though, as they can also be spent on shuffling the three offered genres at the start of each round.

Song Pop is the perfect game for the music obsessed, but not to the point where it alienates those who don’t fit that bill. There’s something here for fans of all shapes and sizes, whether you’re a record collector or just a casual fan of the radio. As a bonus, there’s a solid chance you’ll learn about a few new artists from playing the game, and the chance to purchase the songs you heard is offered through iTunes at the end of each match. And who doesn’t love discovering new music?