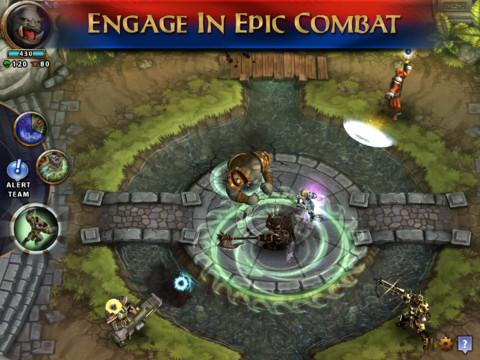 Solstice Arena finds that sweet spot for both hardcore MOBA players and newcomers to the genre.

More than one MOBA released over the past year or two has carried claims that it was accessible, that it finally figured out how to deal with the intimidation factor that can scare away newcomers to the genre. Solstice Arena from Zynga actually backs up that talk, keeping the essential details longtime MOBA fans expect while streamlining things for the uninitiated – and also to fit into the mobile environment. Can it make believers out of hardcore players and noobs alike?

For starters, the team that developed Solstice Arena prefers to put the game in a genre of its own called a “Speed MOBA.” The idea was to get matches down to the 5- to 12-minute range, and that’s exactly what players can expect. Occasionally things will drift past the high end, but it’s the exception rather than the rule.

To accomplish this, the game keeps things simple. Battles are 3v3, there’s only one map, and really only one lane to use to get to the other team’s base. No minions pop up during play, leaving the focus on strategic decisions that involve the two teams of players. Winning involves destroying three towers on the opposing side (which also serve as turrets) before taking down an oracle.

Besides that, other staple MOBA gameplay mechanics are well represented. Both teams accrue gold which can be spent at a store in the safe zone behind the oracle on items that boost characters in various ways. More gold is earned from kills, and there’s a big chest in the middle of the map that can be channeled for a quick 100 gold for all team members.

Power-ups that increase movement speed, damage, and defense are located in various locations, as are icons that correspond to the five schools that help quickly characterize the Heroes: sun (casters), moon (support), earth (fighters), iron (tanks) and void (assassins). Picking up smaller icons or channeling larger ones boosts some or all of a Hero’s abilities. 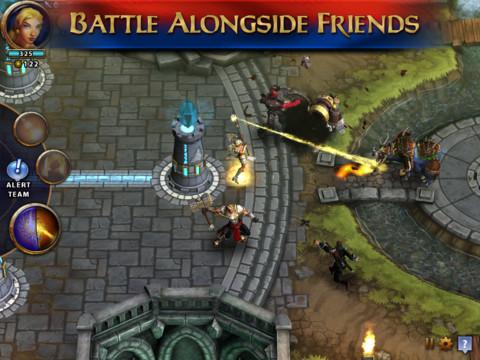 As for those abilities, they’re activated by buttons on the home base side of the screen. The developers stated at E3 that they wanted to make them easy to use and understand, and they succeeded on both counts. Even abilities with a limited range have a handy radius graphic pop up to make it clear exactly how far away they will extend, and since basic attacks stay locked on the last target tapped, you can cast support spells or heals without worrying about losing your prey.

Except for a moat that splits the central part of the map into three paths and slows Heroes who wander into the water, there’s not much that stands out in the way of features. Battles over the chest are common, and most of the rest of the time is spent coordinating tower attacks or defenses. Since chat is impractical for mobile play, Solstice Arena uses a context sensitive button that can alert teammates to advance, retreat, or move to where you’d like to make an assault. It’s not a perfect system, but it works well in such quick battles.

A recap at the end of each match breaks down what happened and awards badges to players based on their performance. Valor and experience points are also distributed; the former is the game’s soft currency, used to permanently purchase Heroes. Experience points are specific to each Hero, and each level attained grants a bonus to one of his or her abilities. There are three advancement trees for each ability, giving players legitimate ways to customize a Hero to their liking. For example, a ranged attack might have damage, range, and cooldown trees. 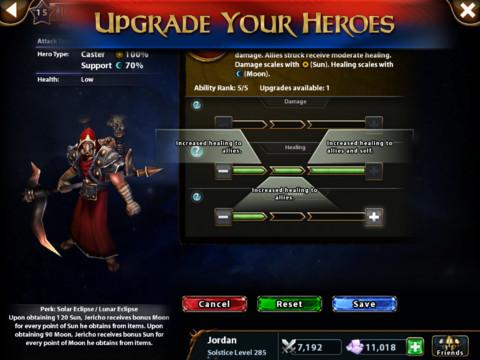 There’s a “GG” button (for good game, naturally) to hit at the final recap screen for the sake of sportsmanship, plus buttons to add players instantly as in-game friends. Hardcore MOBA enthusiasts will probably find the stats and profiles a bit lacking. The only easily accessible info is a player’s level, most played, and last played Heroes, and the last two fields didn’t always seem to be working correctly during launch week. This wouldn’t be an issue if the matchmaking wasn’t wonky at times – like putting three of the same Hero on one team against a well-balanced opposing squad – though one suspects this will improve as the player base grows.

It’s also strangely difficult to figure out how and where to purchase Heroes or hard currency, which is the only way to buy potions or skins for the Heroes. This might be the one area that is unfriendly to beginners, as everything else from the tutorials with full voiceovers to the solo and co-op modes that can help level up Heroes constitutes just the right amount of hand-holding.

The developers (who joined Zynga when the company purchased A Bit Lucky last fall) count several early Trion Worlds employees among their number, and their time working on Rift means they know their way around fantasy character designs. The result is a visually appealing game that sparkles on the iPad screen but appears playable on the iPhone if that’s all you’ve got. Even when things get hairy and all six Heroes are clashing in one area, things never get too cluttered. 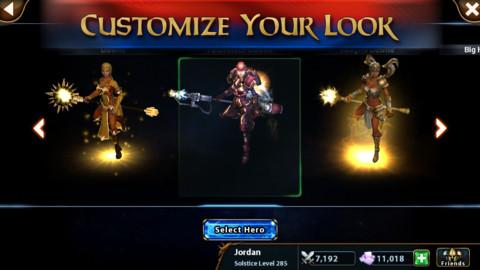 That’s a testament to the overall aesthetic of the product. It’s extremely difficult to be all things to all people, even if we’re only talking about one relatively narrow genre of gaming, but Solstice Arena does the best job yet of pulling it off. If you’ve never played a MOBA but always wanted to give it a try, this one is an excellent way to take that first step.