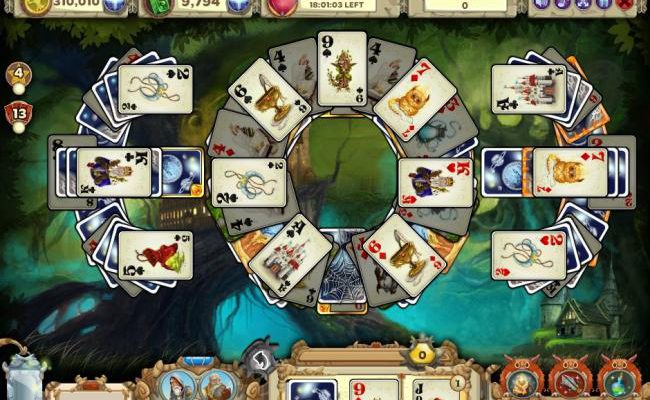 A pushy take on pyramid solitaire that encourages paying in order to progress.

Following the success of games like Fairway Solitaire and Solitaire Blitz, the pyramid genre of solitaire games has regained a ton of popularity, as the incredibly accessible game type simply asks players to click on cards one number higher or lower than the card on the deck. Following in that same vein is Solitaire Tales on Facebook, a game that starts strong, but quickly suffers from pushy and even deceptive friend invites, and a skewed level difficulty that makes it hard to progress.

While there are multiple kinds of levels in Solitaire Tales, the most basic level will have you clicking on cards to remove them from the board at the top of the screen, with the goal being to remove all of the “key” cards therein. These cards are outlined in gold, so you always know which ones to aim for. Cards are placed in pattern templates, perhaps allowing you to see the cards that are underneath, but you can only actually click on those at the top of each pile (like Mahjong). Others are face down, limiting the amount of strategy you can really have. 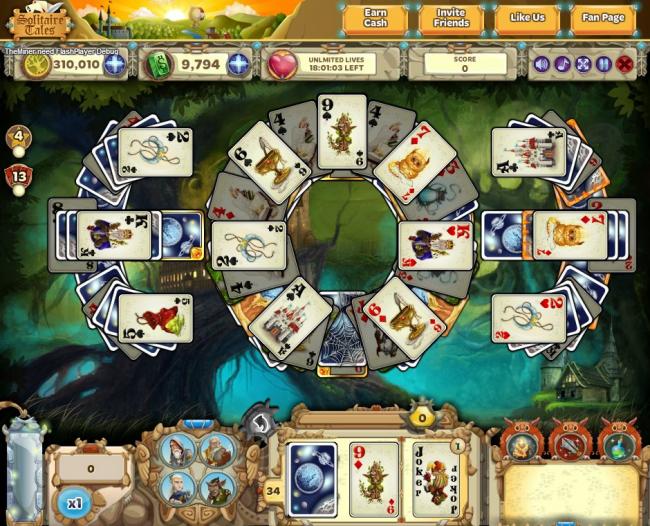 Other obstacles are added to levels as players move along, like card limits that will only allow you to complete stages if you’ve collected all of the gold key cards, or removed all but “X” number of cards from the board. Given the random dealing of the cards in each level (even when you replay stages), failing stages only becomes more likely over time. Another obstacle that’s even worse is when cobwebs are placed on some cards, forcing you to use them twice in a chain before they’re actually removed from the board. The first click removes the cobweb, but also removes the sequential card from the deck: stopping chains in their tracks and adding more difficulty to each stage than was already there by default.

Apart from these levels, there’s also a timed level type that’s a jaw-dropping copy and paste from Solitaire Blitz, as players are asked to clear large columns of cards in the same “one number higher or lower” fashion, with a timer line that adds more time to the clock as the cards above the line are cleared. This mode also includes Joker cards that allow for the placement of any next card, regardless of number, and key cards that unlock additional decks so that you can play more cards at once. 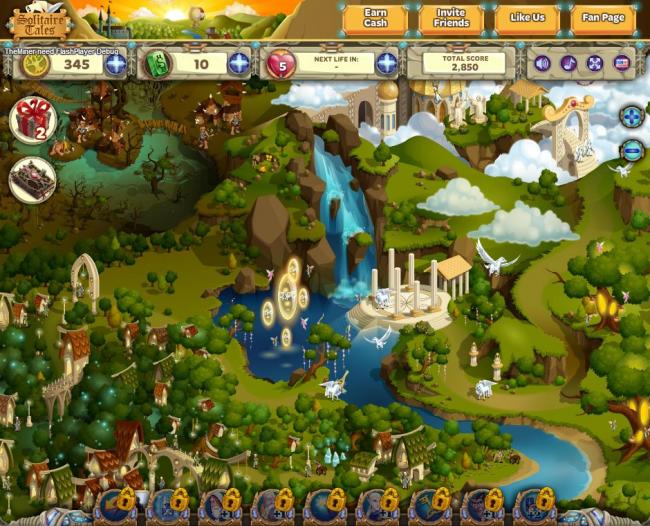 These blitz-style levels are few and far in between, but all levels, regardless of type, reward players with stars, coins, and points as they’re successfully completed. These coins can be used to purchase power-ups, like extra cards in the deck, extra Joker cards, and so on. Stars aren’t just for comparing against your friends, as you’ll need them in bulk to unlock additional chunks of levels. Since so many of the stages past Level 20 are so hard to complete with one star, let alone three, you’ll need to get used to the idea of replaying stages over and over again until you eventually luck out and earn more than one star on each.

Solitaire Tales is monetized in the expected fashions, as power-ups can be purchased with real money after all of your coins have been used, and you can also purchase additional Jokers in each level on the fly for cash. Four completely separate power-ups cost nothing but cash, as they might shuffle the cards on the board, flip all cards face up, or instantly remove two cards from the board. These individual power-ups really aren’t that expensive, all things considered, and players are given one free Joker in each level regardless. 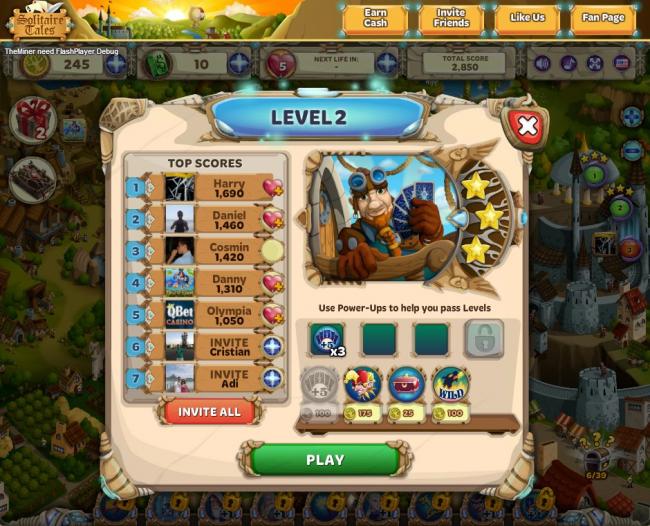 With all of that being said, Solitaire Tales comes with an additional flaw outside of the game’s monetization. The game is overly pushy about asking you to invite your friends to play or liking the game’s Fan Page. These prompts appear after almost every stage, which is quite annoying. Plus, friends’ faces will randomly appear when completing some levels and offer free cards for your deck: making you believe that your friends have started playing the game in the hopes that you’ll “send some back.” This would see you spamming your non-playing friends with requests for a game they’ve likely never touched, which just seems scummy.

Overall, Solitaire Tales is a pretty game with a nice foundation, but like so many other level-based games on Facebook, it becomes too difficult too quickly, and encourages the use of real money to progress. Ultimately, Solitaire Blitz and Fairway Solitaire are still far better experiences than this.