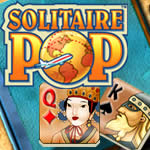 Building upon the same time-honored concepts as its namesake, a popular diversion which revolves around assembling stacks of playing cards in alternating suits and increasing sequential order, the action’s accordingly solid. However, where the title truly excels is via the way in which it borrows these basic mechanics then expands upon them in ways meant to challenge, entertain and keep players glued to the keyboard. While few would describe the turn-based outing as frantic, it’s also not the sort of brainteaser you can afford to simply skim through on autopilot.

While no formal storyline’s provided, the adventure – divided into two modes, Expedition and Challenge – basically sees you playing an archaeologist excavating artifacts from five exotic dig sites including Delphi, Tikal and Xi’an. Options to skim through colorful photos of each locale, browse collected objects in a trophy case-style museum and enjoy small, yet catchy animations of planes zipping around the campaign map all add personality. In truth though, you mostly just hop from one dig to the next with little fanfare, as stages themselves prove the real highlight.

Each level is essentially a grid of tiles branded with numbers, suits (i.e. clubs, spades, hearts, diamonds) and/or pictures of face cards like kings, queens and jacks. As in solitaire, you’ll always attempt to create hands of increasing size by clicking on adjacent tiles of incrementally larger value, e.g. 2, 3, 4, 5 or 10, J, Q, K. Happily, you don’t have to alternate suit here (but can, for extra points) and aces can be high (to pair with kings) or low (making them compatible with 2s). What’s more, so long as a needed number is touching any link in the chain, it can be incorporated into the sequence, meaning you don’t have to move in fixed, linear fashion as well.

Your goal on each scenario is always the same. In Expedition mode, remove all values from a series of columns on the left side of the screen that tracks which cards have been played. In Challenge mode, add values to these columns instead by playing them in proper, Solitaire-style order until the stacks are complete.

Intriguing as the basic setup sounds, your excitement will only grow upon discovery of the various amusing twists the designers have built in, including:

There’s no time limit to worry about – save on special tiles which freeze all others bearing similar value if not eliminated before a ticking clock runs out – making this a largely leisurely-paced, not heart-racing challenge. Ask yourself before buying: Is something a little speedier than most tabletop games, yet mostly more mellow than the standard casual outing, right for you?

Matters of personal preference aside, however, we also noticed some minor interface niggles, e.g. your inability to deselect highlighted tiles by hitting the right mouse button. Regardless, it’s simply nitpicking: An inspired fusion of two complementary play styles, Solitaire Pop should keep all you lone rangers happily preoccupied for hours on end.