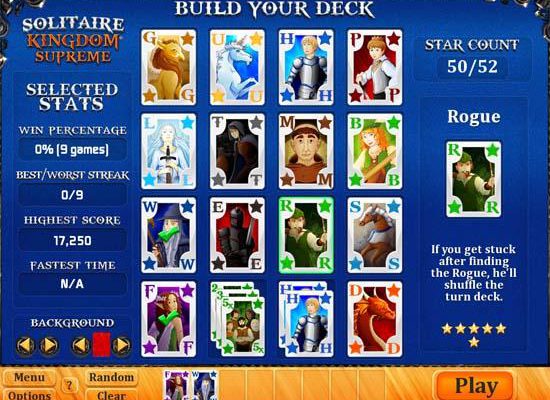 Solitaire Kingdom Supreme is a Klondike solitaire game that is anything but traditional. Featuring a Build Your Deck system of power up cards, you are practically guaranteed that no two games will be the same.

If you have ever played Windows solitaire before you have all the knowledge needed to start Solitaire Kingdom Supreme. The rules are the same as every Klondike solitaire game, with the goal being to create four piles of cards going from Ace to King and sorted by suit. While the gameplay is very familiar, and has been done numerous times before, it’s the additional features that really make this game stand out. 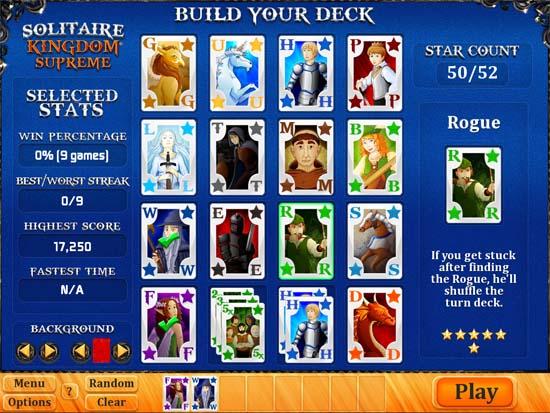 The biggest feature of Solitaire Kingdom Supreme is the Build Your Deck feature. The Build Your Deck section is where you will find your Kingdom Cards. These cards will grant you power ups during your gameplay and you can mix and match them to find the best combination for your playing style. The first card you get is the Griffin which will redeal the deck to make sure you have at least one Ace card and two other playable cards. Other cards include the Lady of the Lake, which shows you all legal moves and the Monk card which allows you to flip one card at a time instead of three.

When the game begins you only have one Kingdom Card, the Griffin. As you play and earn points you will unlock more cards. You will also need to unlock stars and slots though, if you want to use multiple cards. Each Kingdom Card has a cost to use. You purchase the cards using stars. Some cards, like Lady of the Lake, cost one star, while others, such as the Monk cost more. You also have a limited number of slots to hold cards. You will need to strategize the best combinations within these limitations.

Solitaire Kingdom Supreme also features an achievement system that is presented as a Coat of Arms. You will unlock the achievements for doing things such as winning three games in a row, or earning a speed bonus of 3,500 points. By earning these achievements you will also be unlocking Kingdom Cards, stars and additional slots. 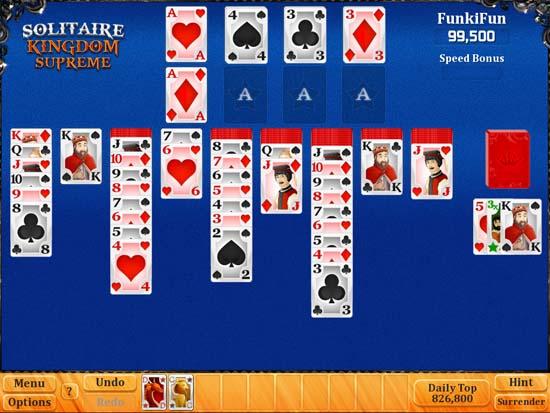 Because Solitaire Kingdom Supreme is a Klondike Solitaire game, there is no variation in the layout of the cards. For those used to games like Fairway Solitaire and the like, this can become tedious after awhile. However, the game does a good job of providing plenty of new twists to prevent that from happening.

Solitaire Kingdom Supreme may not be for everyone, but if you are looking for a good relaxing game of solitaire I would recommend giving this game a try.