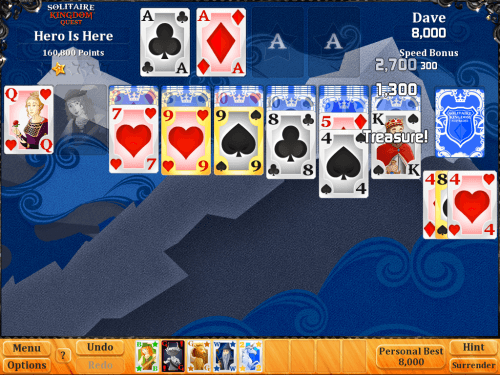 Solitaire Kingdom Quest is, as you can probably surmise from the title, a medieval themed solitaire card game. The flavor of solitaire in question is Klondike, which is the typical version that we’ve all seen. The game is the follow-up to the super-popular Solitaire Kingdom, and seems to add in a lot of the stuff we’ve seen in the Slingo Quest series as well.

You’re tasked by the King to join the “Solitaire Heroes” (so weird it’s awesome) and head out questing. What it really means is that you’ll play lots of solitaire with power-up cards to help you as you try to meet the requirements of each level. The cutscenes (such as they are) are simple with no animation and very basic sparse dialogue; luckily you’re probably not playing a solitaire game for a rich story, because you won’t find one here. It does what it needs to by stringing each level into the next.

With more than 60 levels in total, and a constant supply of daily games you can try out, it’ll be quite some time before you see everything the game has to offer. Different zones and levels give you access to different power ups or obstacles, though the levels are unlike something like Fairway where the setups are really bizarre and inventive. Here, it’s all pretty much basic solitaire, which to me means it’ll last me for a while, but I can’t play for long stretches of time.

The variety seems to come primarily from challenges from the Black Knight, who for reasons unknown really doesn’t like it that you’re suddenly the King’s go-to solitaire guy. At various points in the hands his card pops up and he shows up onscreen to throw down the gauntlet. He might try to bet you “deal or no deal” style whether or not you’re going to beat the hand that round, or sometimes even engages you in a mini-game with memory cards or something. It’s a nice diversion, and if you’re feeling confident it’s great place to rack up points.

One of my major issues with the game is the initial difficulty and the lack of explanation to the player of what’s expected of them. In the very first level in order to advance to subsequent quests you need to satisfy a laundry list of objectives. This isn’t really told to the player until they finish the round, however, and find the “next” button grayed out. Even then, the list is tangible enough that it might take you a few tries to get it all in order to move on. I’d be ok with this in later stages but right out of the gate seems a little unfair, especially since it’s never communicated properly. 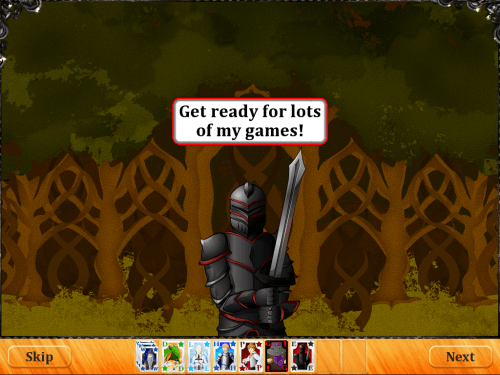 Another weird communication flaw is that the game never really started spelling out what the power-up and extra ability cards did until a few missions after I started seeing them pop up. When you see them initially you pretty much need to just figure them out or highlight over them to see it spelled out. But why not just have the pop-up boxes the first time the card shows up, what’s the point of holding it back a few levels?

Also (and finally) the “hint” button will just show you possible moves, not what you should do to move the game along. Which means that since it costs you points to use when you click it you might lose points just to watch a stack of cards move from here to there, not helping you in any way shape or form. This is especially frustrating when the game doesn’t realize you’re out of moves and doesn’t give you the surrender/restart option, which leads to you clicking hint and watching nothing good happen.

My takeaway from all this is that while it’s a totally competent solitaire game, at the end of the day it’s just “ok.”Solitaire Kingdom Quest offers dozens of hours of gameplay for solitaire fanatics, but you’ll have to overcome a few quirks along the way.