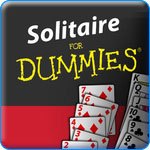 Ah, Solitaire. How many times have I wiled away the hours with you when I should have been working? I’m sure I’m not the only one with this illustrious past with the old Windows standby. But Solitaire for Dummies shows that there are many different ways to play the game.

Similar to the other Dummies titles from Beanbag Studios, Solitaire for Dummies is an easy way to learn many versions of the game. And boy, are the a lot of ways to play. The game offers ten different modes: Klondike, Pyramid, Scorpion, Penguin, Free Cell, Canfield, Yukon, Monte Carlo, Accordion and Golf.

Like the other Dummies games, Solitaire for Dummies gives a clear, concise lesson for each variant, and provides an eight-questions quiz afterwards to ensure you have a grasp of the rules. What was very surprising about learning the games is how vastly different each Solitaire variation is, and there is a vocabulary for each one.

For instance, did you know that the area on which your initial cards are dealt is called the “tableau?” Or that the stacks where the cards go to win the game are called “foundations?” Solitaire for Dummies, like the other games in the series, is very exact in its descriptions, taking the game very seriously. While it can be difficult remembering the exact words for each function of each game, each variant is easy to pick up and play, but very hard to master.

The traditional Solitaire variant, Klondike, is just the beginning. For example, there’s also Pyramid, where the cards are dealt in pyramid shape on the tableau (hence the name) and to get rid of cards in your pyramid, you find pairs of cards that add up to 13; Penguin, where base cards for the foundation are determined by the first card dealt on the tableau (called the “beak”) and cards are added in ascending order; and Scorpion, where you create four foundations of tableau in descending order, king to ace. You can move partial stacks with cards of the same suit, and have three cards in hole in case you run out of moves.

To help you out, Solitaire for Dummies offers a Hint button, showing you the next recommended move while you learn the ropes. This feature is invaluable while you learn to spot the patterns and moves that will help you win with greater ease.

Once you’ve learned mastered the basics, Solitaire for Dummies lets you dive right in to each variant from the title menu, without having to go through the lessons or quizzes.

Solitaire for Dummies shares the same aesthetic of the other games in the series. While unspectacular, the graphics and sound are pleasant and unobtrusive. If you’re looking for a flashy Solitaire title, this isn’t it. Rather, think of it as an interactive how-to book. Seeing as all the Dummies games are based on the popular book series, this isn’t really a stretch.

The Dummies games are all great guides for learning the ins and outs of our favorite pastimes. Solitaire for Dummies delivers a solid, no-nonsense solitaire experience. If you’ve never ventured beyond your desktop or mobile Solitaire game, definitely give Solitaire for Dummies a look. Just don’t try to be productive while you’re playing.