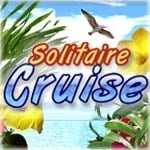 Given the enduring popularity of solitaire, it’s easy to understand why so many developers feel compelled to put their own spin on the classic card game – even when the end result, Solitaire Cruise, is something that is so far removed from the original concept that it can barely be called “solitaire” at all.

Although the game uses regular playing cards, Solitaire Cruise actually has a lot more in common with the tile-matching game Mah Jong than it does with traditional solitaire. It’s a concept that works with varying degrees of success.

At the start of the game you’ll hop aboard the luxury cruise liner Britannic and set sail around the world, visiting ten different countries in all and stopping to play a few rounds of cards in each port.

In traditional solitaire, the goal is to arrange cards on top of each other in descending order in alternating black or red suits (for example, a 4 of a red suit can be played on a 5 of a black suit, and a black 3 could then be played on the 4), with the ultimate goal of arranging each suit from low to high in four reservoir piles starting with the Ace of each suit.

If you aren’t familiar with solitaire and all this sounds confusing, don’t worry: Solitaire Cruise throws all the rules out the window. The resulting game is much more basic; this time around, all you have to do is match pairs of cards with the same face value to clear them from the playing area (for example, 8 with 8, King with King, and so on).

Like Mah Jong, the cards are arranged in all sorts of exotic and interesting patterns that all pay homage to whatever location the cruise ship is sailing to: the stars and stripes and Liberty Bell in the USA, a beach towel in Barbados, the Amazon River in Brazil, Buckingham Palace and the crown jewels in Britain, a pyramid in Egypt and a Japanese lantern are just a few examples. There are around 200 levels to eventually complete and unlock.

Other variations on the formula include bonus cards: lock cards that can only be cleared by matching them with corresponding key cards, and cards that grant extra shuffles and restacks. You can also earn bonus points by stringing matches together quickly, although there’s no official time limit and players can go as slowly or as quickly as they want to.

You can reshuffle the cards a certain number of times to continue a stuck game, but if you run out of reshuffles then you must start at the beginning of the level. The exotic soundtrack, complete with sitars, didgeridoos and other ethnic instruments, is also fairly interesting. However, Solitaire Cruise is not without its faults.

Because of the Mah Jong-like patterns and devices like the lock and key cards, the deck is never truly randomized like a real game of solitaire. As a result, the game feels contrived and too easy at times. Having cards at various sideways angles can also be a bit disorienting.

Solitaire Cruise also isn’t exactly an original concept. Similar blends of solitaire and Mah Jong can be found in Mystery Solitaire and Aloha Solitaire, and the round-the-world theme was featured in Mah Jong Adventures.

For fans of card games and Mah Jong, however, Solitaire Cruise might be enough to satisfy. It’s ideal for short bursts of play, and the main mode is worth playing again to unlock the second set of layouts – something that involves strategically using up all the stockpile cards in addition to clearing the playing field and as a result is much harder to do. In my first casual play-through, I had unlocked only 17% of what the game had to offer, which vouches for its replayability factor.

Mortimer Beckett and the Secrets of Spooky Manor Review