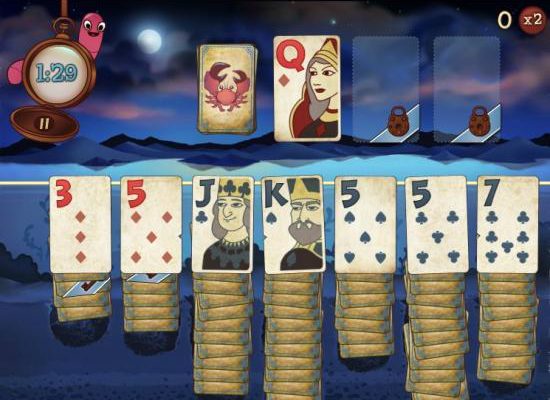 Solitaire Blitz treads water at times, but it does it like a champ.

Disney’s Sebastian the Crab once suggested that everything is better “Under the Sea.” But what about that lonely classic card game, Solitaire? That depends on how much you like soggy cards. It also depends on how interested you are in completing a game of Solitaire as quickly as possible before the tide washes the cards away.

Speed is what primarily drives the gameplay in PopCap’s Facebook game Solataire Blitz. You organize cards in ascending and descending orders with the aim of clearing columns. Unlike regular Solitaire, however, the cards’ colors don’t make a difference. You simply need to sort, and you need to do it quickly, since you have a mere minute for each game.

Of course, Solitaire Blitz is a Facebook game, which means you can purchase a power-up or three to help you get an awesome score to hold above your friends. You earn silver pieces in the game by racking up high scores, and by clearing away card columns to reveal hidden treasures that can be “sold” for more loot. In turn, that silver can be put to use to buy time extensions, score multipliers, and other trinkets that will help you get a leg-up on the game.

Unsurprisingly,the amount of silver you earn is quickly outstripped by the power-ups’ high prices. The solution? Microtransactions, obviously. If you want more silver, you need only visit the in-game store. If you’d rather not buy your way to a winning hand, though, you can also browse the store for new decks. Strike fear into the hearts of your rivals with your adorable kitten deck!

But Solitaire Blitz is incapable of striking fear into anyone’s heart, really: it’s a pretty cutesy-looking game in all. The standard card artwork is basic, the animations are unremarkable, and it won’t take you long to hate the fishook-worm who hangs over every level starts panting and fidgeting as time begins to run out. Solitaire Blitz’s simple aesthetics aren’t necessarily a bad thing, though, since it means lower-end computers can run the game with no trouble. And who plays digital Solitaire to gawp at the graphics, anyway? 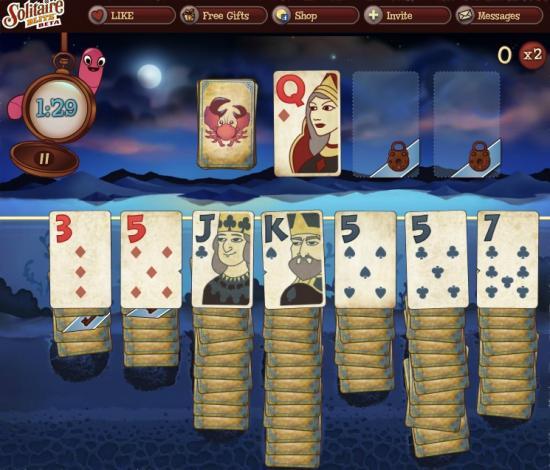 The game’s undersea theme is compelling, nonetheless, as it’s fun and satisfying to uproot buried treasure. Solitaire Blitz‘s acoustics are soothing, too, thanks to lots of swishing seaside sounds. Solitaire Blitz’s timed matches are pretty intense, but at the same time, the visuals and sounds make them quite relaxing to play through. You’ll play one hand after another–though you’ll inevitably have to stop when you run out of “Energy” and need to wait for a recharge (or just pony up some cash for an instant recharge).

Solitaire Blitz might not impress Solitaire purists who would rather not play with alternative rules and a timer–to say nothing of the option of the in-game store. You certainly don’t have to buy or use power-ups, but their very presence might understandably be a turn-off. For everyone else, though, Solitaire Blitz is another solid title from PopCap. Playing the game is like taking a trip to the sea: it’s a bit flat at times, maybe a little bland, but ultimately calming to be around, and capable of drowning you while sharks eat your legs.

(Disclaimer: Solitaire Blitz will not drown you or loose sharks on your legs.)