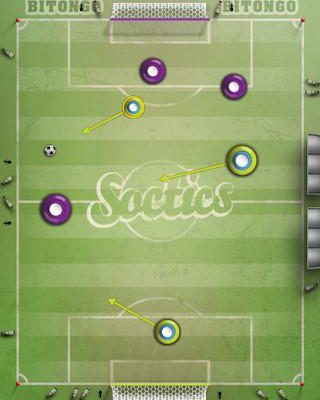 Some things go together incredibly well. Chocolate and peanut butter. Milk and cookies. Flintstones and Jetsons. The same holds true in the world of video games, and that’s great news for developer Bitongo’s Soctics League. It boldly combines elements of soccer and air hockey, resulting in something a little more strategy-heavy than either of its counterparts. Also, far less dangerous. Have you ever been hit in the head with a soccer ball? Ouch.

The game kicks off with the option of viewing a video tutorial or playing through an interactive one. I sprung for the latter, as it seemed like the most effective way to learn how the game works. Regardless of which one you choose, though, you’ll understand how the game works in a matter of minutes.

The action takes place on a field, and the object of the game is to land the ball into the goal of the opposing player. Sounds just like soccer, right? The difference is that each player controls three pucks, as opposed to a team of characters. Once you and your opponent have told the game where you want your pucks to go, the play is set into motion. This process carries on until a player nets three goals or someone gets annoyed with you for playing like a jerk and quits.

Not that that’s happened to me or anything.

There’s a lot of depth to be found within those basic rules. For starters, players can change the size of the pucks, which in turn affects their trajectory. You can also force pucks to remain stationery, meaning you can camp in front of your goal and anger whoever you’re playing against. At the end of the day, isn’t that what sports are all about?

It’s next to impossible to predict where the ball will end up at the end of every turn, because you’re not privy to what your opponent intends to do until after you’ve aimed your pucks. If you’d like a possible insight into how things will shake out, though, purchasable binoculars show you what the trajectory of the ball will be based on your actions. It makes it easier to form a strategy, but most of the time I ended up just getting cut off by the opposing player. 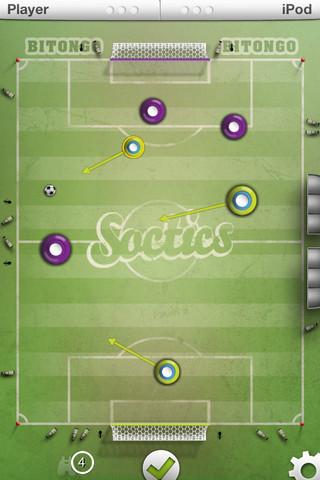 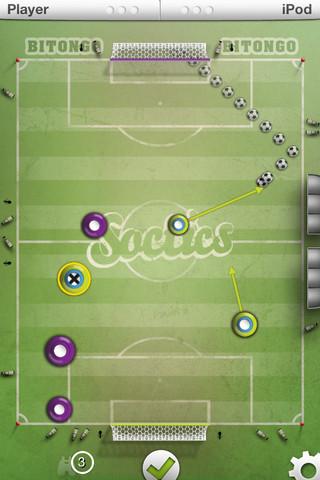 Soctics League is a very multiplayer-focused game, offering local, online and Game Center matches. If you’re having trouble getting a match going (or your friends are just being rude), you can also compete against an AI opponent. Shoddy AI can all but ruin a game, but it’s balanced incredibly well in Soctics League, being both tough but possible to defeat.

As excellent as the content offered is, there’s certainly room for more. An offline league mode, for example, would add a lot of meat to the experience, and make playing more than a match or two at a time more compelling. Missions beyond just Game Center achievements that encouraged you to play the game in different ways and try new things would also be a welcome addition.

Soctics League is the kind of game that’s a blast to play a few times a day, especially when you have a friend or two playing as well. But if no one in your social circle is willing to give it a download (shame on them), that doesn’t mean the game will be a total wash for you. Playing against AI is still a lot of fun, as is going head-to-head with random opponents online. Just make sure to avoid jerk-like tactics such as resting by your goal the entire time.